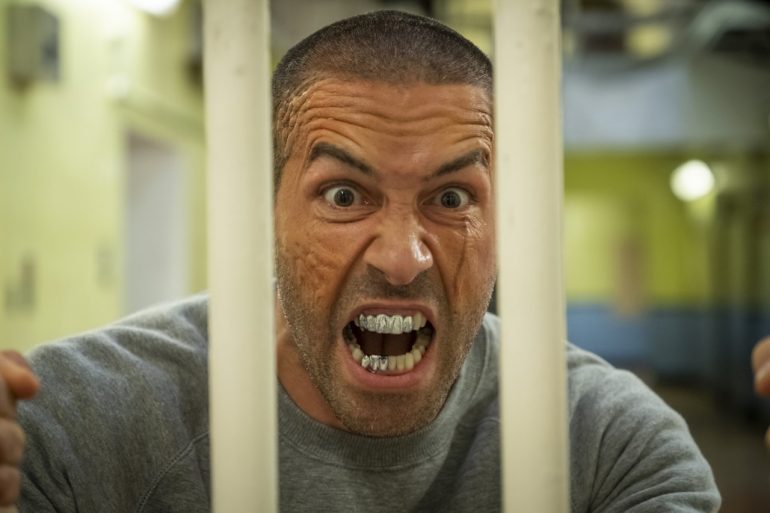 Scott Adkins and director Jesse V. Johnson have developed a very interesting creative relationship over the past two years.  Their films SAVAGE DOG, ACCIDENT MAN, THE DEBT COLLECTOR, and TRIPLE THREAT are a throwback to a stripped-down style of action filmmaking where the most important special effect is the physical prowess of the performers and the quality of the action choreography. They have brought this throwback style to their latest collaboration, the prison revenge tale, AVENGEMENT.

In AVENGEMENT, Adkins plays “Cain Burgess”. Cain is a recently escaped convict looking to strike back at the criminals and lowlifes he feels are responsible for his hellish stint in lock up.

I had the pleasure recently of talking to Scott Adkins about his role in AVENGEMENT, his partnership with Jesse V. Johnson, IP MAN 4, his philosophies on what make a quality movie fight scene, plus a whole lot more!

What sort of preparation did you do for the role of “Cain Burgess” in AVENGEMENT?

I just wanted to create that character and come up something a bit different… I mean, it was easy because Jesse had the idea for the script, and we developed it together with the other writer, Stu Small, and he was very much involved from the inception of the idea. So, by the time it came to learning the lines, to creating the character, I really knew it inside out because I was so heavily involved [in the development]. It was a lot of fun. We wanted to bring a very hard edged, cool, nasty character to the screen in the vein of [films like] BRONSON or CHOPPER and I think we definitely succeeded in that.

I agree. Tell me about your working relationship with director Jesse V. Johnson. You have worked together a lot at this point.

I think what happened was… We did SAVAGE DOG and then when we did ACCIDENT MAN, really that was my movie that I had written. I had it in my head completely and Jesse came on board that. We really had a handshake deal. We did it 50/50. It was very much a partnership and I think it stayed that way. Not so much on TRIPLE THREAT.  I just turned up and did what I was told on that one but on AVENGEMENT [it was a team effort] and hopefully with ACCIDENT MAN 2. So, it’s very much a partnership and he listened to my advice and was very passionate.

As an actor, he allows me to try to really express myself and do some good work. He’s very careful watching my performance. He knows when I can do better, and he gives me the space to do that. He won’t let me get away with an untruthful performance and I love that. Likewise, if I feel that he’s missed something directorially I’ll call him out on it, and we’ll have that discussion. Sometimes, it gets a little bit heated to be honest, [laughs] but we always end up with stuff we are very proud of and we keep coming back for more.

You mentioned an ACCIDENT MAN sequel. Is that something you are actively developing?

Absolutely yeah. I hope that we can be doing it this year to be honest. We are very excited to do it because the last one did well. 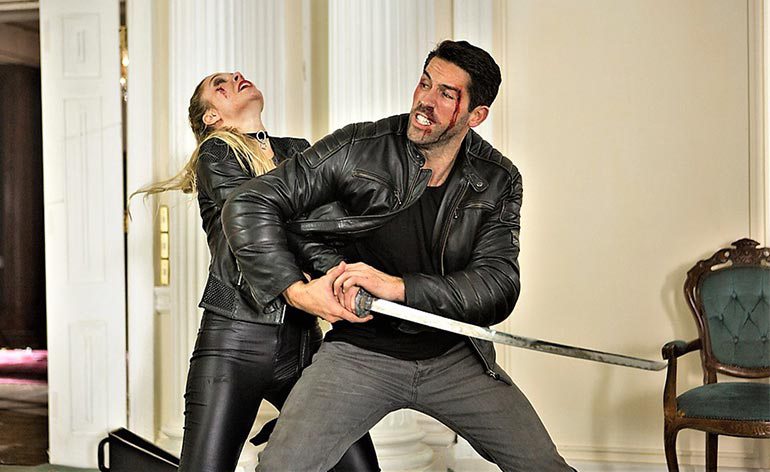 Returning to AVENGEMENT, what were some the challenges of filming the climatic fight scene in the pub? You’ve got that one location and so many actors involved on a tight schedule.

Dan Styles did a great job choreographing all those fights. We didn’t have a lot of time, but I did make sure that we had more time in the schedule… I fought for a bit more time in the schedule because the whole film builds to that point and if you shortchange the audience here they won’t forgive you. I did not want to do that, and I was aware of that.

We had two days for that fight. So, I fought for it and I’m glad I did. It is difficult to choreograph fights against multiple opponents because people are going to be waiting around. You try to knock someone down and they don’t get up for a bit and then they run off camera. It’s always tricky. We wanted a very gritty, hard-hitting, and violent fight there with all the weapons and everything. It’s pretty gruesome, some of it. It’s a helluva lot of fun, though. People get a real good kick out of it.

What do you think makes a great movie fight scene?

Well if you’re invested in the story, that’s what makes a good fight sequence. If you don’t care about the story or the characters: it’s just a fight, ya know? That’s great sometimes, but when you really care about what’s going on and when you’re telling the story within the action as well, that’s when it’s at its best. If you care about the stakes of the character, it doesn’t even have to be an amazingly shot fight sequence because if you care, you’re going to be into it, but if you can have that and also  shoot it really well and I like to say, “we fill the frame with beautiful movement” and of course we make it electrically violent. 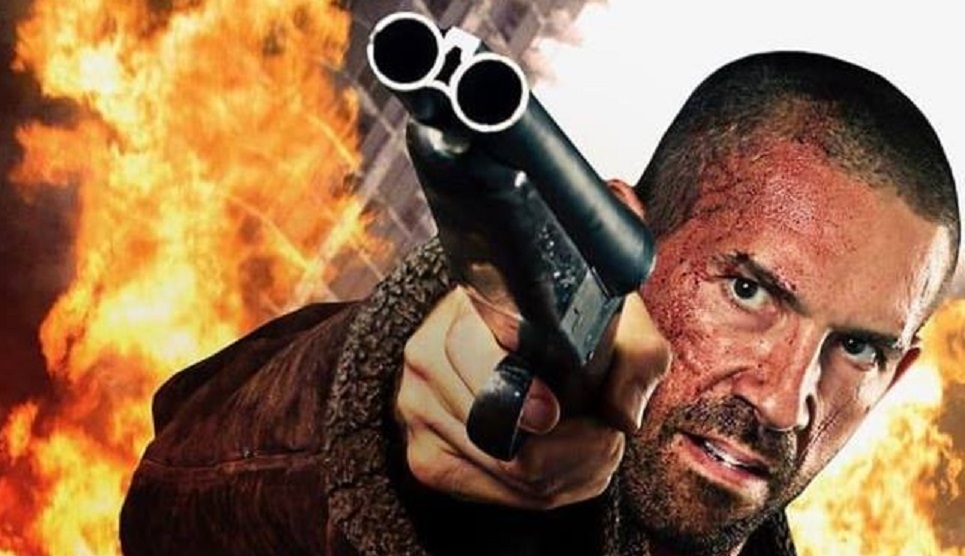 What is your favorite fight scene from your past films?

I like the end one in AVENGEMENT because of its brutality and it’s non-stop and so on. The end fights of UNDISPUTED 3 and NINJA 2 are great fights. The fight with Lateef Crowder in Undisputed 3 is one of my favorite ones. The “sporting goods store” fight in UNIVERSAL SOLDIER: DAY OF RECKONING, that’s a favorite of mine. There’s lots. [laughs]

What are some of your favorites by other actors?

I love the Bruce-Lee fights because it really shows how to dismantle an opponent in a real way, with real technique. He uses a lot of feints and little tricks and that always amazing to watch him do that. Then there’s fights like what Jackie Chan would do, that were so inventively choreographed. The rhythm and the timing and editing were so amazing in his heyday during the 1980s doing Hong Kong action cinema. Then you’ve got the Yuen Woo-Ping stuff which is all the wire work and the glory of full on Kung Fu. I had that experience recently with Donnie Yen in IP MAN 4. Then you’ve got something like John Carpenter’s THEY LIVE, where it’s a fight that it goes on forever, and it’s very much about the story and the characters and I love that fight so much. It’s so simple, but it’s a brilliant fight. The end fight in Lethal Weapon, Jesus that was bloody and so great; doing jiu-jitsu back in the 80s! It was ahead of its time.

You mentioned IP MAN 4. What can you share with us about that project? Have you seen any finished footage from it yet?

I have seen some footage and it’s fully in keeping with in the style of the previous three movies. If you like the other ones, you are going to like this one. I haven’t seen the whole film yet, but this one certainly takes it into new territory when it comes to the stakes. We have the character of Bruce Lee in there and there’s some issues going on with him. Mr. Ip Man needs to sort out some arrogant American types let’s say. [laughs] I’m going to leave it at that.

I just have a few more questions before we wrap up. What are some of the keys to staying in good shape and injury free on the tight shooting schedules you have to deal with?

Well I don’t know if I’ve figured out how to stay injury-free because I’m riddled with them. In terms of staying in shape you’ve just got to get in there and get the job done. I’ve got a very workman-like attitude about things. You’ve just got to get on with it and if you want to be in good shape you just get in the gym and train. The important thing is to get through the door. Once you’re in there, even if you do a half-hearted workout and just don’t feel like working out. Just make sure you get there and train, but also when you get older you’ve got to know when to pull back a little bit and not over train. Just get through the door. Just get it done.

You’ve done so many different types of films with Jesse V. Johnson at this point. Are there any specific genres you would like to collaborate with him on? 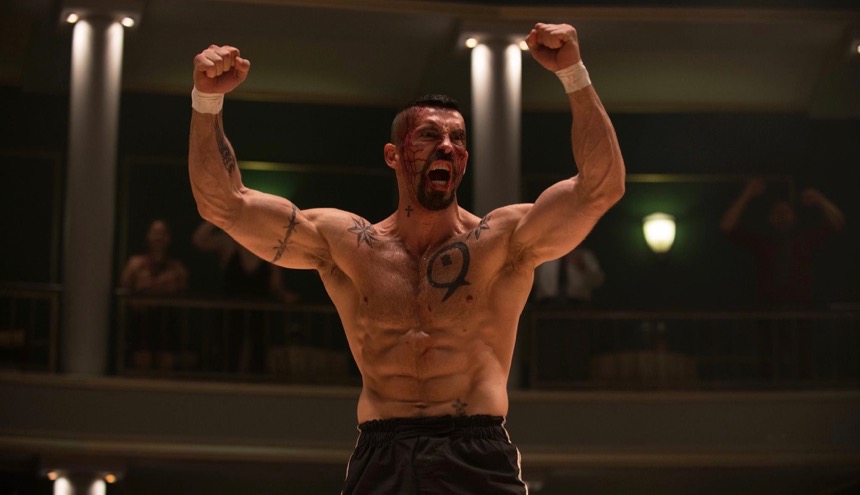 I’ll never say never, but those films, they suffered with piracy, the reason those films are so good is that we do have enough shooting days to make them good because that company knows how to make good films. They don’t want to do them on the cheap. When people download those movies for free and the movies don’t return a profit, those producers aren’t interested in making another one. That’s just the way it goes. At this point, I think Boyka is  done and dusted.

That is unfortunate but I hope that sentiment encourages people to go out and purchase AVENGEMENT and support your other films, as well. AVENGEMENT is some of your best work so far. Thank you for taking the time to speak with me about it today, Scott.

Thanks a lot. I appreciate your support.