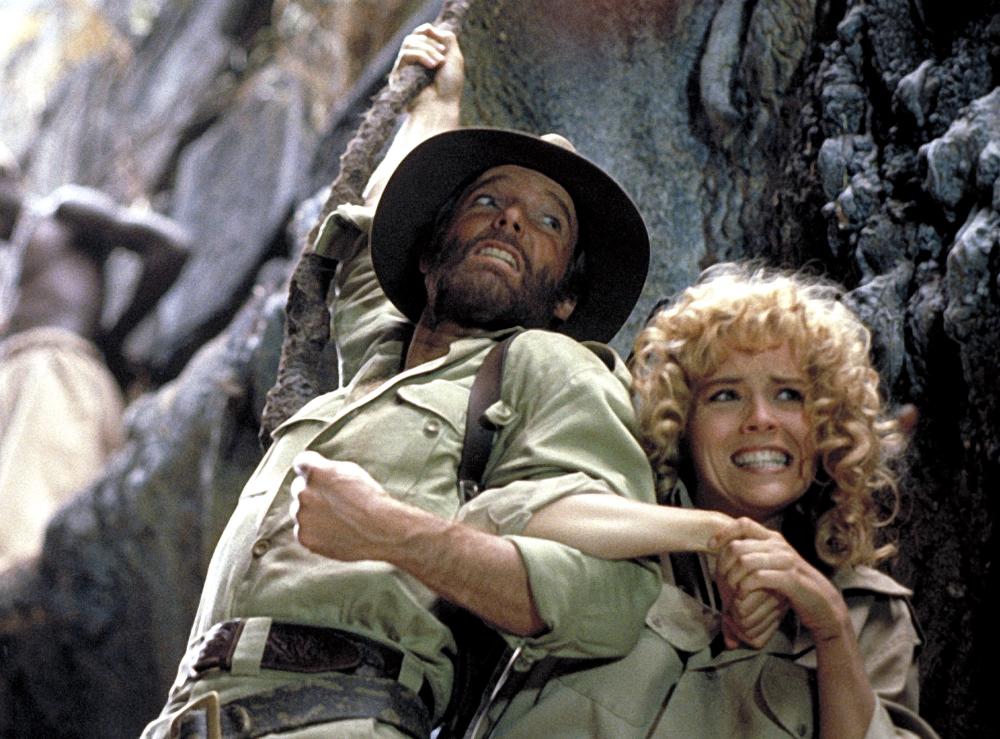 It’s too bad that this effort feels like outtakes and leftovers, but it only goes to show what a fluke Cannon had with the first one.

Synopsis: Allan Quatermain once again teams up with Jesse Huston where the discovery of a mysterious old gold piece sends Quatermain looking for his long-lost brother, missing in the wilds of Africa after seeking a lost white race.

Review: After the unexpectedly awesome King Solomon’s Mines from The Cannon Group, a sequel was piggybacked into production while they still had a hold on stars Richard Chamberlain and Sharon Stone. Right from the start, you can detect the lack of enthusiasm from everyone involved, and there’s a distinct absence of a villain this time around which makes the adventure less fun and perilous. Quatermain and Jesse (Chamberlain and Stone) have settled in Africa with their riches, but when Quatermain gets word that his long lost brother is being held against his will in a fabled lost city of gold, he shirks his wedding plans with Jesse and decides to hire some mercenaries and track his brother and find the “Lost City” in the deepest parts of Africa. Instead of whining too long about her broken wedding plans, Jesse joins her man on the quest, and they pick up some help along the way, namely Umslopogaas (played by a slumming James Earl Jones) who towers and frightens with his giant axe. As a team they encounter a hell pit, some worms in the earth, an earthquake, and a cannibal tribe of pigmies who think Quatermain is a god. Even though Quatermain and Jesse find the Lost City, they’ve had better adventures.

Allan Quatermain and the Lost City of Gold played endlessly on television in the early 1990s, and while the movie is easy to watch, it doesn’t have the energy, pizzazz, or the ingenuity of the earlier film. There aren’t any inventive gags or thrills this time around, and the lackadaisical directing by Gary Nelson can’t hold a candle to what J. Lee Thompson did with the first entry. It’s too bad that this effort feels like outtakes and leftovers, but it only goes to show what a fluke Cannon had with the first one. Jerry Goldsmith’s great score is pilfered this time around, and Gene Quintano’s script is almost cringe worthy. A shame.

Olive Films released a Blu-ray of Allan Quatermain and the Lost City of Gold two years ago, which is strange considering they only just released the Blu-ray of King Solomon’s Mines. I actually compared my MGM DVD with this Blu-ray, and I can report that Olive’s transfer is much better, though the film looks dark to begin with. Still, Olive’s transfer is sharper and more filmic than the DVD from about 15 years ago, so it’s worth the upgrade to collectors and fans of the franchise.