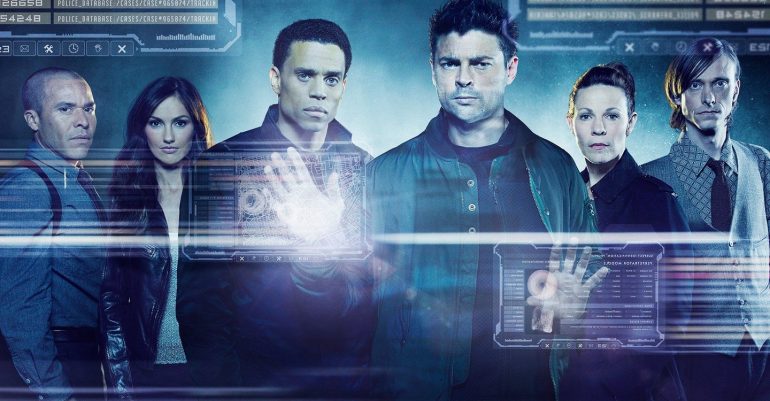 Another scifi-action-crime outing that packs all the stunts, humor and intelligence in one exciting package.

Plot: J.H. Wyman (Dead Man Down) created this sci-fi crime drama set in the year 2048, when John Kennex (Karl Urban, Lord of the Rings), a veteran Los Angeles detective with mental and physical baggage, returns to the force, but struggles to adjust to the mandate that requires human officers to be paired with robots. Fortunately for Kennex’s psyche and well-being, he’s eventually partnered with one called Dorian (Michael Ealy, Sleeper Cell), an older android model that’s capable of expressing emotions, which will make all the difference in the world as they depend on each other to battle terrorists, drug rings and cyber-criminals in all corners of the city.

Review: Another Blade Runner-meets-Lethal Weapon mash-up that also benefits from Die Hard type mastermind villains, Star Trek-level humor (how ironic given that Karl Urban was also part  of that neverending franchise!) and Terminator style fight scenes. Viewers are instantly treated to the rather likable future detective duo. Making time for character dilemmas, recurring mysteries and a lovely atmospheric soundtrack by The Crystal Method, this show is anything but dull. The CSI show franchise would be jealous of the eye candy on display here, especially when it’s complementing some actual layered substance here.

Adding to the various inventive future crime cases are personal mysteries that need solving for either lead character. The supporting cast of characters is also rather solid, serving as moody characters who either help the duo get to their next task or helping the characters question their mysterious past. At 13 episodes, the show of course fell victim to being aired out of order and bad ratings but that matters not as it had no cliffhangers and was yet another beneficial cyberpunk craving. Dial this delicious cookie up when you got some free time as you’ll have everything you want and zero regrets.