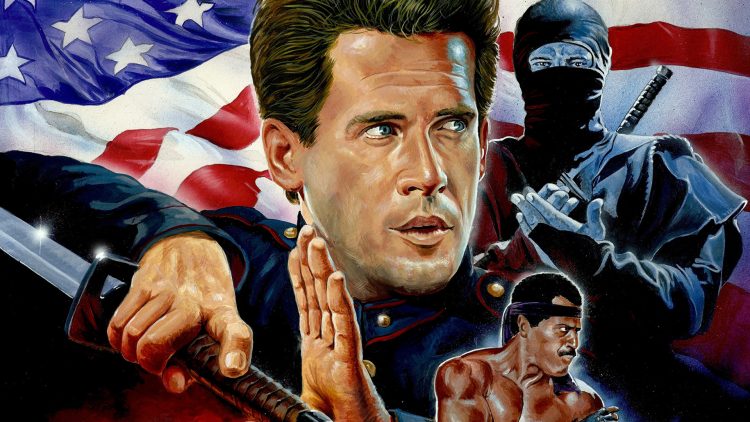 There’s no excuse a true fan of these films has to not buy each one. You know what to do.

Plot: On a remote Caribbean island, Army Ranger Joe Armstrong investigates the disappearance of several marines, which leads him to The Lion, a super-criminal who has kidnapped a local scientist and mass-produced an army of mutant Ninja warriors.

Review: The adventures of Joe Armstrong and Curtis Jackson continue with this lightweight sequel that delivers more or less what fans were expecting from a follow-up. Joe and Curtis (Michael Dudikoff and Steve James) are dispatched to a tropical island where several United States Marines have disappeared without a trace. Once they get there, they’re made fun of for being Army, but when they start producing results, the Marines start taking orders from them. More ninjas are thrown into the mix than in the first film: A crazed millionaire (Gary Conway, who also wrote the film) is experimenting on strong, healthy men and turning them into mindless super ninjas!

Michael Dudikoff’s abilities as a martial artist noticeably improved between this and the first film. Steve James has plenty of moments to shine here, and his character is more than a sidekick, which is nice. Mike Stone plays the evil henchman Ninja, and he also coordinated the fights. Sam Firstenberg directed.

Olive Films has just released the first four films in the American Ninja franchise (part 5 is sadly and unfairly absent) for the first time on Blu-ray in North America. The big plus (other than having these films in the widescreen format in high definition, obviously) is that Olive has produced new special features for each release. AN2 has a fun running commentary by director Firstenberg, and a 16-minute “make of” feature called “An American Ninja in Capetown: The Making of American Ninja” that documents the interesting challenge it was for Cannon to make the film in South Africa during the tail end of Apartheid. Also included on the disc is a theatrical trailer. All four of the releases are affordably priced to own, so there’s no excuse a true fan of these films has to not buy each one. You know what to do.