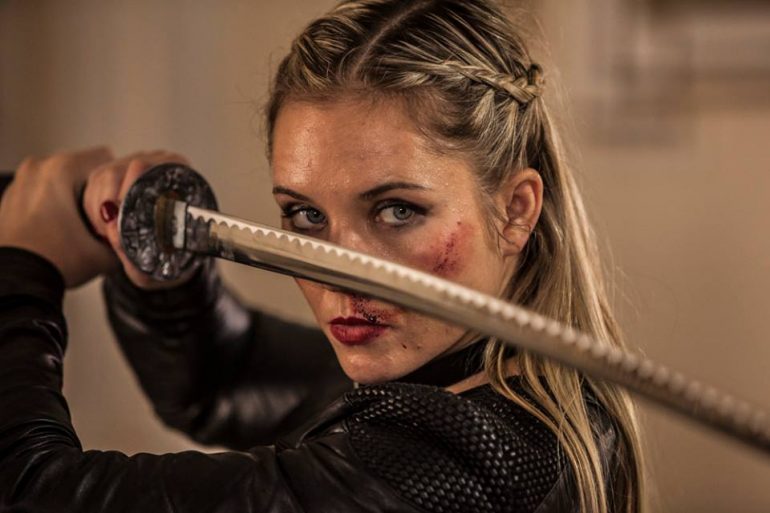 Kristijan Škrobo recently chatted with Amy Johnston on his website Scrobocop.de and has kindly shared it with us.

Amy Johnston is best known for her stunt work in movies like Deadpool, Captain America: The Winter Soldier or Suicide Squad. In the last few years she also became a leading actress in movies like Lady Bloodfight, Female Fight Club and Accident Man.

How did you got into the Martial arts?

My father was a 5 time world kickboxing champion who owned a Martial Arts school which I grew up in. He taught a style called “The Progressive System” that I started studying as a child, which involves Kenpo, Kung Fu, Kickboxing, Arnis and many more. From there I went on to train in several other styles.

Was it your dream to work as a Stunt Woman early on?

I grew up watching a lot of action films, mainly 80’s Hong Kong Action. Bruce Lee, Jackie Chan, and Michelle Yeoh really inspired me to be in action films. I always loved to perform throughout school in theatre, dance, gymnastics, martial arts, choir and more. I wanted to combine my love for entertainment and martial arts and become an Actress and Stunt Performer!

Is there a favorite Stunt Performance in a movie or TV show from your side?

My favorite film is Crouching Tiger Hidden Dragon because it is a beautiful blend of action and storytelling.

Do you consider yourself mainly an actress or as a stunt performer?

I initially worked as a stunt performer when I came to Los Angeles but now I work as an Actress who does her own stunt work.

I recently saw Accident Man, I really love it….can you describe the movie and your role?

Thank you! I really enjoyed that film and being involved! It is such a fun comedy and has some very colorful characters! It is based off the comic book by Pat Mills. I play the role of “Jane the Ripper” who is a very ruthless and manipulative killer. I had a total blast fighting against Scott Adkins; he is so talented!

In it you have an amazing fight scene with Scott Adkins; how much time did you have choreographing and executing this fight?

Tim Man was the choreographer for the film as he usually choreographs films for Scott Adkins. He is wonderful! Scott and I practiced for a few hours then ran the sections before we shot them on set!

Some comments on Scott and working with him?

I was really impressed with Scott! He wanted to film Accident Man for many years and he did it. He was wearing many hats and really created a great film!

I really love Jesse V Johnson’s movies… I think he did some amazing movies and I am thrilled about his Triple Threat movie, how is he as a director?

Jesse Johnson as a director is so great! He knows exactly what he wants but at the same time he allows the actor to play and have fun with their character!

In FFC Dolph Lundgren acted as your father… how was this experience?

I only had a few scenes with Dolph but he was great to work with! I really enjoyed the flashback scene where he was holding pads for me to do some training!

Right now this movie is available on Amazon Prime in Germany… why should people give it a chance and watch it?

FFC is more than just an action movie. The director Miguel A. Ferrer really turned an action film into a good drama piece about family and power.

Lady Bloodfight is another movie with you as the lead actress, please tell us something about that one!

Lady Bloodfight was my first film as the lead actress so it was a very memorable experience! It was a long road to get to that position so it was an important film for me. I had a blast training then filming in Hong Kong for several months. The stunt team was truly amazing. The cast was incredible and so talented. Many of the actresses weren’t stunt performers and they did their own action! The director, Chris Nahon was truly one of the best directors I’ve ever worked with. I was very happy to work with Voltage Productions as well!

Are there some other projects planned with you as a leading actress?

Yes, I recently finished a pilot called “Paloma’s Flight” that is getting turned into a TV series! Directed by multiple Emmy Award winner Lee Stanley. There are others that I can’t quite talk about yet but soon!

You also wrote a book: How to Stunt in Hollywood… (also available on Amazon) what can an interested reader expect from the book?

I created “How to Stunt in Hollywood” to give insight into the world of stunts and action. I wanted to shine a light on the incredible people in the industry as they don’t always have the proper platform to share their amazing stories and advice! The book is for anyone wanting to get into the industry, learn more about it or just gain inspiration to move towards what they really want to do! Here is the link if anyone wants to check it out! https://amzn.to/2NHti3K

I recently did an Interview with Cynthia Rothrock, she is kind of a pioneer, have you been influenced by her?

I absolutely am inspired by Cynthia Rothrock as she has really paved the way!

With Gina Carano and Ronda Rousey (who obviously have some fighting skills) but also other Ladies like Charlize Theron and Jennifer Lawrence it seems that there are more and more movies for leading ladies in action movies? Is that also your impression?

Yes, it’s a great time to be an action lady! I am so happy!

So thank you for your time Amy, it was a pleasure.

Thanks so much for the interview!