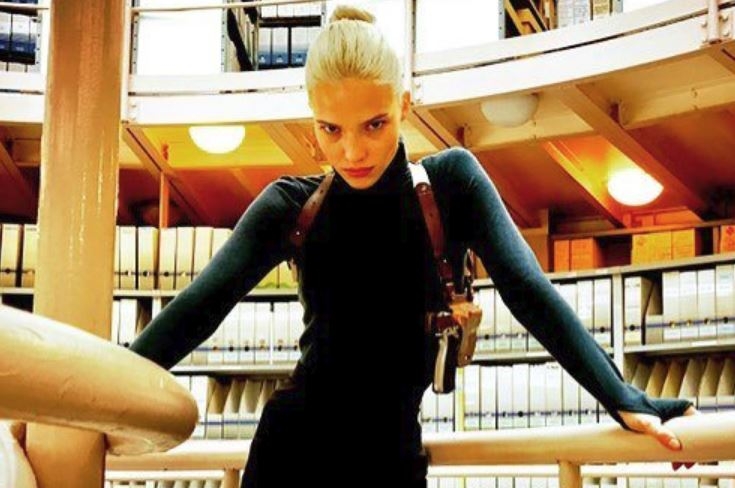 Plot: Beneath Anna’s striking beauty lies a secret that will unleash her indelible strength and skill to make her one of the world’s most feared government assassins.

Review: A young girl is rescued from a life of petty crime and recruited to work as an assassin for a shadowy government agency, where her allegiance to her country and even her own identity will be tested.

Sound familiar? It should. That is the plot for writer/director Luc Besson’s classic 1990 film LA FEMME NIKITA. It is also the plot for his latest directorial effort, ANNA.

Yes, after nearly three decades Besson has returned to the concept that first brought him international acclaim. The film landscape is a very different place in 2019 compared to 1990 though. We live in a world where everyone is now familiar with the cinematic action language of Asian films that heavily influenced Besson’s “beautiful assassin” film and have since seen it be redefined by hits like the JOHN WICK series. That plus the looming accusations of sexual misconduct that have been leveled again Besson in the wake of the #MeToo movement mean that ANNA would have to be a stellar piece of action filmmaking to succeed despite these obstacles.

ANNA is not that successful. It is simply too deeply flawed; it does contain some very enjoyable elements though.

The titular “Anna” is played by former model Sasha Luss, who previously worked with Besson on the science fiction misfire VALERIAN AND THE CITY OF A THOUSAND PLANETS. Luss has a strong on-screen presence. She looks stunning in the variety of costumes that the film has her appear in throughout its runtime. She also handles the action elements in the film very well. However, when she is called on to perform dialogue, she falls more than a little flat.

It is not just Luss who struggles with the dramatic scenes in ANNA. Even experienced actors like Cillian Murphy (BATMAN BEGINS) and Luke Evans (THE FATE OF THE FURIOUS) seem utterly lost as the dueling government agents vying for Anna’s allegiances and affection. Speaking of which, ANNA handles the romantic elements of the story in a very clunky way. It shorthands romance and emotions with random sexual encounters between Anna and the two dashing government agents. Knowing about the accusations against Luc Besson it’s hard not to cringe at these questionable moments in the film when they occur.

The only one who makes a notable positive impression in the non-action oriented dramatic scenes is the legendary Helen Mirren (RED) as Anna’s main KGB contact, Olga. Mirren somehow takes a role that makes her look like the character “Edna” from Pixar’s THE INCREDIBLES and imbues it with a real sense of reality that all the other characters in the film are sorely lacking. She shows here yet again that she can take the silliest material and almost single-handedly elevate it into something more worthwhile.

The structure of the film also doesn’t do the struggling actors any favors, ANNA is presented in a non-linear fashion intended to provide the film with numerous plot twists but every time the film switches to a moment in the past it announces it with a title card telling you how many months, days, or years it is flashing back to. These occur so frequently that it is hard to engage with the story of the film because it becomes clear that any of the events you are watching will be undermined moments later by a flashback, prefaced by a title card, and after the third time this occurs it becomes more than a little comical.

I’ve spent most of this review talking about where ANNA stumbles but where it soars is in its action sequences. In a post-John Wick world, It appears Besson knew that he would have to bring some top-notch action to the film and ANNA delivers that with three action set pieces that can stand toe-to-toe with any sequences from the JOHN WICK series.

The shining example of this comes an hour into the film when Anna is tasked with eliminating a target in a crowded restaurant (another homage to LA FEMME NIKITA). Clips of this scene have been used heavily in the film’s marketing and it’s easy to see why. It’s an expertly crafted melee with steady camera work and minimal editing. In fact as I think back on the scene, I’m struggling to remember any cuts at all. The action is fluid and brutal as Anna dispatches groups of henchmen with dual-wielded pistols and various improvised weapons. It is the kind of sequence that will bring a smile to the face of even the most jaded action fan. The stiffness in Luss’ performance melts away in these scenes as she exhibits everything you would want from a credible action lead.

The action on display in ANNA is simply the best of Luc Besson’s career and that statement includes the films he produced as well. Considering some of the quality action in those projects, like THE TRANSPORTER series for example, that is high praise.

Is great action and stylish direction enough to warrant a recommendation, though? As this review is for a site that specializes in action on screen, in this case, I think it is.

The story may be a bit tedious and derivative. The acting may be mostly flat and uninspired but if you want something to help ease you down off that post-JOHN WICK action high, then ANNA might be just what you are looking for.