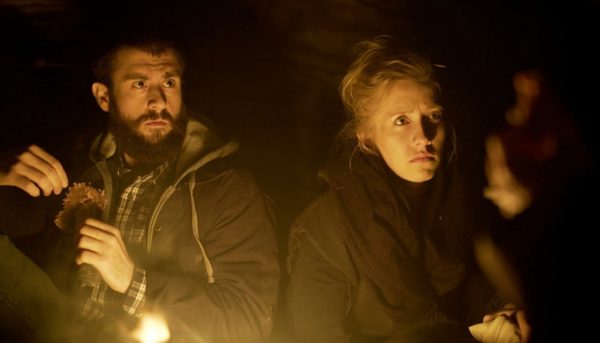 Apocalypse Road is nothing special, but it’s a serviceable end of the world thriller.

Synopsis: Apocalypse Road follows the journey of two sisters while separated during a post apocalyptic depression.

Review: The world is on the brink of a Biblical apocalypse: An older woman recounts the way humanity has been forced to take the mark of the beast on their hands or foreheads, and how humankind is on the precipice of the end of all things. She has survived an ordeal, which she recounts to the audience. When she was younger, her and her sister wandered the urban wastelands, eluding murderous marauders. The sisters are Natalie (played by Katie Kohler) and Sarah (played by Ashlyn Evers), and they are being hunted by a sniper. The sniper, who is on assignment at the behest of a female general who has a harem of women at her beck and call, doesn’t always kill his quarry; sometimes he wounds them to slow them down, while more often he goes in for the straight kill. Natalie and Sarah are separated, and they each end up in the clutches of different factions.

Natalie ends up with a good guy who tries to toughen her up, while Sarah has been captured by a warlord with bloodthirsty followers, but the sniper – who is hunting both sisters to bring to his liege – eliminates all opposition one thug at a time until it’s just the two women again. Eventually, there’s a violent confrontation between the two sisters and the killer, and the outcome is resolved by brute force.

An attractive and slick looking box cover art deceitfully sells a film that looks nothing like the way it’s advertised. The film itself isn’t bad, but it ends up feeling like a quiet, introspective little indie action film, and not the genre-busting, sexy adventure the artwork promises. That’s a small complaint, and if you’ve trudged your way through the post-apocalyptic genre over the decades you should know ahead of time that what the artwork says you’re gonna get isn’t necessarily what you end up with. Writer / director Brett Bentman does what he can with very limited resources and earnest actors. Apocalypse Road is nothing special, but it’s a serviceable end of the world thriller.