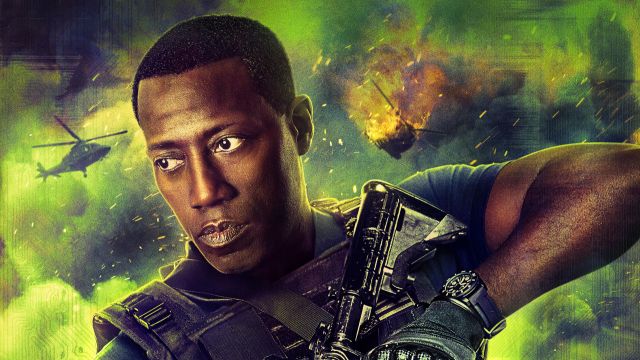 There is very little to recommend about Armed Response and it’s certainly not what we were wanting to see from Wesley Snipes.

Synopsis: A team of highly trained operatives find themselves trapped inside an isolated military compound after its AI is suddenly shut down. The crew begins to experience strange and horrific phenomena as they attempt to uncover what killed the previous team.

Review: Armed Response is the fourth project for Wesley Snipes since being released from prison. His first one out of the gate was a supporting role in Expendables 3, which was an auspicious return, and a very welcome one. The part felt like it’d been written for him, and we were all happy to see him back on screen. His next project was the ill-fated TV series The Player that was cancelled before getting a full series order. A shame. 2017 has seen the release of two Snipes movies – both of which were released theatrically. I eagerly saw them both first chance I got. The first of the two was the hokey alien invasion flick The Recall where Snipes had to play alongside a bunch of bouncy ball teenagers. The film was a major let down. It was not a good role for him, and he looked bored with the material (because it was terrible). The second one was the glossy-on-the-surface Lionsgate release Armed Response from director John Stockwell, whose career I’ve followed fairly closely as a filmmaker. When Stockwell hits his mark (Blue Crush, In the Blood, Countdown), the movies turn out to be really fun genre fare. Armed Response is the first time where I felt like he was clueless with how to handle the material. Maybe he signed on because it was a chance to work with Snipes, but Snipes isn’t given anything to do in this thing. In fact, no one is given anything to do.

It’s about a team of soldiers going into a secret scientific compound where some bad stuff has clearly gone down. Did the scientists catch a disease and die? Is there a creature running amok? Are there ghosts or demons lurking in the hallways? Aside from a few quick flashbacks (one of the side characters gets a surprisingly poignant backstory, but for no good reason), the entire movie takes place in a dimly lit hospital-type set where the soldiers point guns at shadows. Eventually, some of the characters get possessed or turn against each other, but what it is in the facility still sort of remains a mystery. Snipes doesn’t exactly play a hero, and he never really gets involved in any action (because there really isn’t any to speak of). Armed Response is an unfortunate waste of time. Snipes deserves better. His fans deserve better. Fans of spooky hallway movies will be disappointed. If there was a monster or something in this, then it might rate a star higher. If there were some cool action scenes, it would definitely rate higher. WWE superstar Seth Rollins is in it too, but the pinnacle of his “moment” in the film is a fight with Anne Heche, who WINS the fight. So, yeah. I got nothin’.

Lionsgate is releasing Armed Response on blu ray / digital HD, and DVD on October 10th. “Inside the Minds of Armed Response” is the only special feature on the disc.