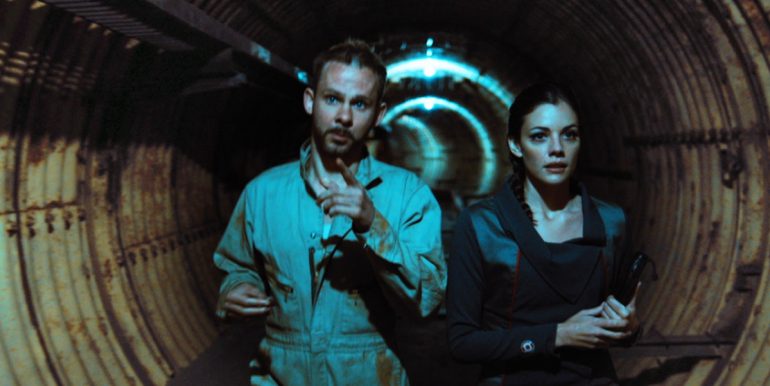 I enjoyed Atomica but couldn’t help but feel that it took a long time to get to the finale and when it did, it all ended too quickly

Plot: In the near future, when communications go offline at a remote nuclear power plant isolated in the desert, a young safety inspector, Abby Dixon, is forced to fly out to bring them back online. Once inside the facility, mysterious clues and strange behaviors cause Abby to have doubts about the sanity, and perhaps identities, of the two employees onsite.

Review: In the future, everything is powered by super safe generators that convert radiation into reusable energy, provided by the Auxilisun corporation. We are told they never fail, so right away you know this will not end well. When something goes awry with communications at one of their main locations, the young and green Abby Dixon (Sarah Habal) is dispatched to track down and fix the problem. Upon her arrival, she is greeted by the somewhat off kilter operations engineer Robinson Scott (Dominic Monaghan). He claims that he is alone and that scientist Dr. Zek (Tom Sizemore), left the facility days ago and he has no idea where he went or when he will be back. As the film progresses, the characters begin to unravel. Is Abby losing her mind with dreams of childhood? Is Robinson who he says he is? Where is Dr. Zek?

Dominic Monaghan is very good in this role and seems to relish tearing up the screen with his bizarre antics that manage to keep Abby and the audience on edge. Habal is also perfectly cast as the inexperienced company employee who is always trying to prove herself, and as things around her start to break down, so does her tough veneer. Tom Sizemore’s role is nothing more than a cameo really but he plays an important role nonetheless.

Overall, I enjoyed Atomica but couldn’t help but feel that it took a long time to get to the finale and when it did, it all ended too quickly. Apart from that pacing issue, if you are a fan of sci-fi thrillers, you should put Atomica on your list of movies to see.