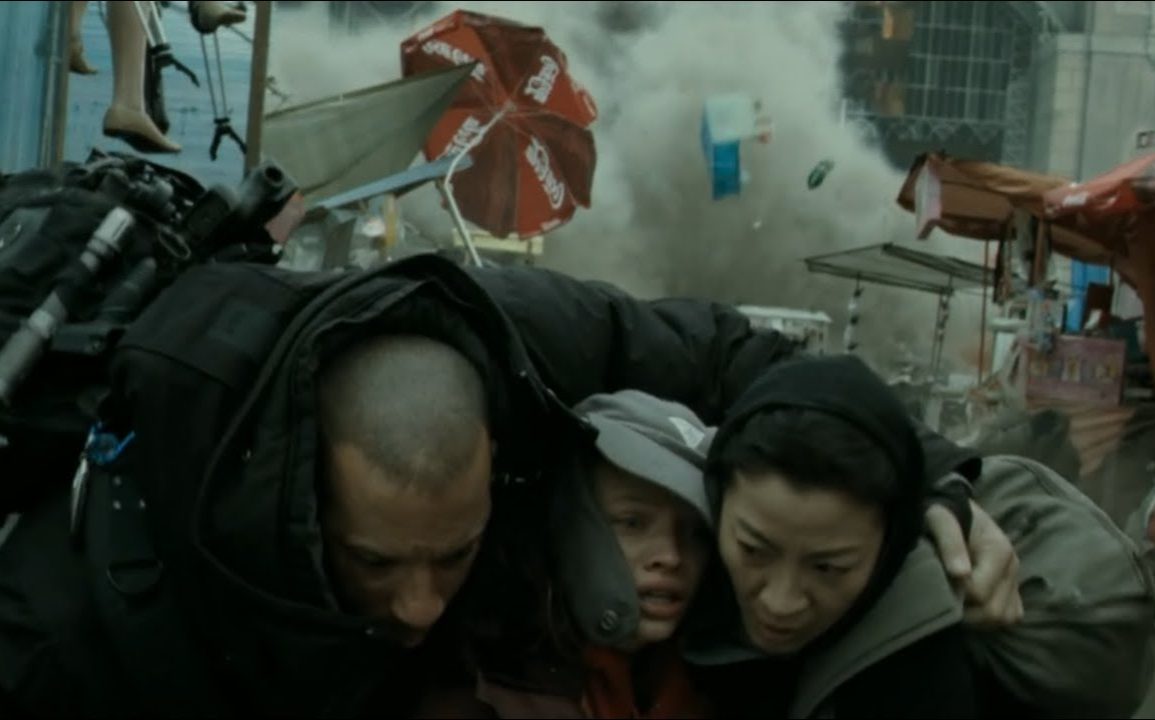 Plot: A mercenary is tasked with transporting a mysterious young woman from Eastern Europe to New York City in a dystopian future.

Review: I haven’t read the book this was based on, Babylon Babies, which was published in 1999, but it’s starring Vin Diesel, so I figured, how bad could it be, right? Sometimes, when you’re perusing the movie store and need a movie to get that 2 for $10 special, you’re willing to take a leap of faith.

Well, sometimes those leaps of faith miss – badly. This is one of those occasions. Babylon A.D. is a horrifically bad movie. Horrifically. Despite my better impulses, I sat through the entire thing – I think mostly to see if there would be a point to what I had, at that time, spent over an hour watching. By the end, I was terribly unsatisfied and wished I had spent the 100 minutes of watching the film doing something more constructive, like watching paint dry.

The movie’s plot starts out simple enough – Vin Diesel has to take Melanie Thierry from Europe to America. Michelle Yeoh comes along because she has watched over Thierry since she was a baby – okay, whatever, Michelle Yeoh always makes things better. Along the way, they come across a mysterious parkour gang, a Russian sub, a crazed church cult and a large man in a fighting cage. There’s a bunch of babble that alludes to immaculate conception, clairvoyance and A.I. being implanted in newborns. None of it makes sense, and the narrative is beyond choppy. I honestly kind of understood everything without understanding any of it. The plot for this movie stank of trying to be more than its surface, but in the end – it just stank.

The characters were also kind of weird. Vin Diesel was Vin Diesel – he’s the gruff anti-hero with a heart of gold he’s played in the Fast and the Furious movies. Michelle Yeoh is rock-solid but seems somewhat embarrassed to be in the film at times. Melanie Thierry is all over the place. I could not figure her out – she’d scream and act out and then be all calm. She’d try to get with Vin Diesel (which came out of nowhere) and then be all pensive and shy. It was just really damn weird, and I would love to have heard the direction she was given for her character. An unrecognizable Gerard Depardieu was actually quite fun as an Eastern European terrorist, but Charlotte Rampling, Lambert Wilson and Mark Strong all struggle in this movie to give the trite dialogue any meaning or purpose. They’ve all done better than this film.

Now let’s move to the action – which, again, was just frickin’ weird. You had all sorts of shaky-cam, which was uber-annoying in the fight club because it was the first real action we got, and you couldn’t see a damned thing. Then, there would be scenes where they would do slow-motion so you could see a particular hit or a missile rocketing by someone’s face. Then back to quickly edited shaky-cam. Rinse and repeat. It was a blend of awful. You have one of the world’s biggest action stars in Vin Diesel, and you have a living legend martial artist like Michelle Yeoh, and you don’t utilize them properly? That’s just frigging criminal.

As for the rest, the cinematography is nice in parts but drab and uninspiring in others (it was literally like two different people made this movie). The soundtrack was generic, though I did enjoy the opening song. I think somewhere, buried under the layers of shit, there was a decent movie somewhere, but it just got lost in what it was trying to be, so it was a hodge-podge mismatch of nonsense.

Oh, and I saw the “unrated and raw” cut that gave 11 more minutes than the theatrical release. I don’t think the theatrical release would have been much better, though there was a scene at the end of that cut different from the unrated one. I read up on it, and all I can say is, doesn’t sound like I missed much. Do yourself a favour, though and skip this one because, believe me, there’s few things that you could spend 100 minutes on that would be worse than watching this mess.