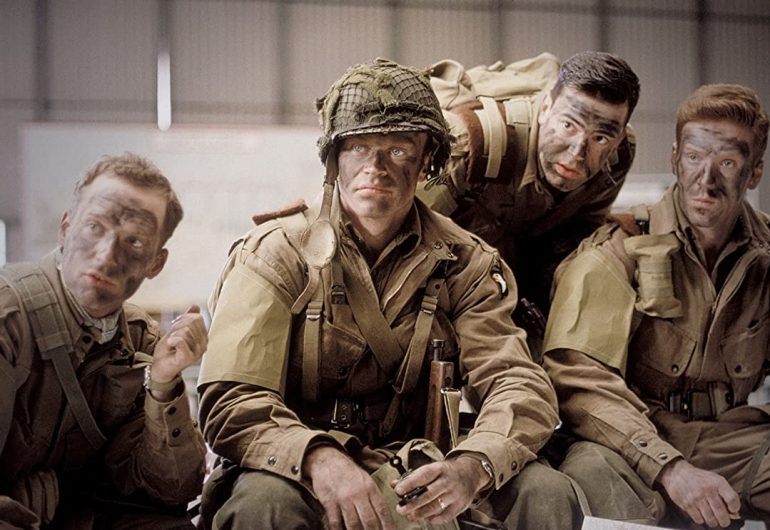 Required viewing for all WWII drama fans while being a pitch-perfect history lesson!

Plot: Based on the novel by Stephen E. Ambrose and done in the style of Saving Private Ryan, this groundbreaking HBO series chronicles Easy Company. They were the 506th Regiment of the 101st Airborne Division, and are shown through their mission in WWII’s European theater from D-Day to V-J Day. Based on interviews with survivors and shown along with soldiers’ journals and letters, this mini-series shares the experiences of these legendary men as they displayed extraordinary bravery and faced unimaginable fear.

Review: With a cast of semi-knowns and unknowns like David Schwimmer, Neal McDonough, Ron Livingston, Damian Lewis, Scott Grimes, Michael Cudlitz, Donnie Wahlberg and Dexter Fletcher, the men all look the parts that they are assigned. And like the best War films they take inspiration from, they do not seek to have this be reliant on an all-star cast- only convince and be part of an already high-scale reenactment. And because it’s HBO, it once again will always be one of their best known works while also never feeling like just any TV show with the cinematic look it contains, the horrifying depictions and the opening real-life people interview intros. The battles are both traumatic and exciting while also properly documenting all these young men who share the same emotion if not the same fate.

Often reshown on other cable channels each D-Day as remembrance of June 6th, it will always deserve to be reseen by movie/TV fans or to merely introduce to a new audience. Whether it’s the heartbreaking concentration camp reveal, snow-filled trenches or the closing days to the end of 1945, this is both a history lesson and an emotionally rewarding intense drama. There have been great TV historical series before but this is the key one that raised the bar since.