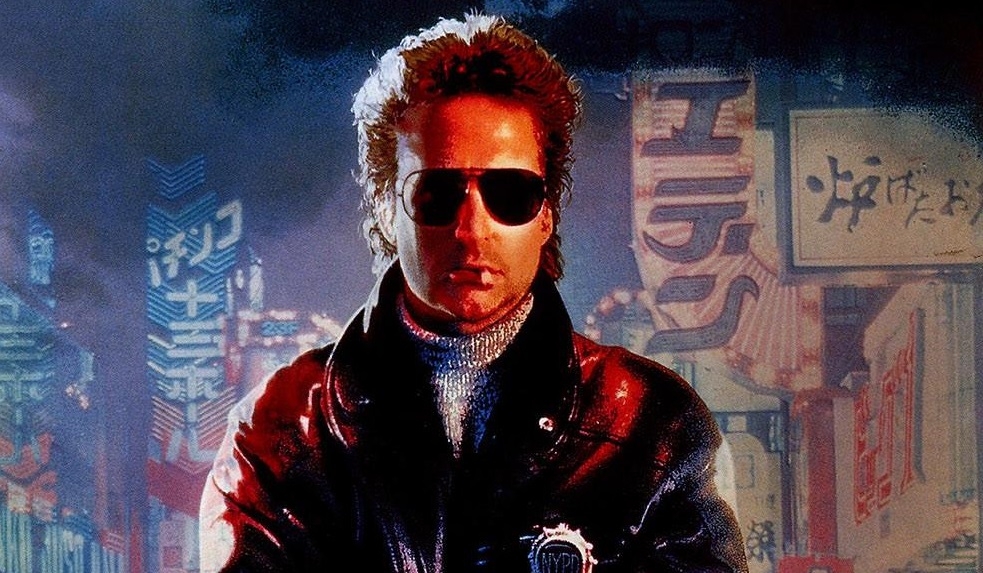 Released thirty years ago this week, Black Rain is one of those films you often forget exists, in large part because the director Ridley Scott is routinely thought of for bigger, bolder and more expensive productions.  It was released on September 1989, just sneaking into the eighties and contains a hefty central performance from Michael Douglas, who was back on the big screen after 1987’s Wall Street. The plot of the film is a pretty run of the mill, fish out of water, revenge thriller, however it is the aforementioned performance of Douglas and his supporting cast, with some beautiful neon-dripped imagery from Scott and cinematographer Jan de Bont, that really sets the film apart form the raft of cop thrillers/actioners that pepper the eighties and early nineties.

Douglas plays Nick Conklin, a rough and ragged NYPD detective.  The film opens with Conklin driving a motorbike across a bridge into New York with a beautiful sunrise back-dropping him as he pulls in under a bridge to take part in an illegal street race for money (with a brief appearance here by Luis Guzman) this before we are even informed that he is a cop. We soon learn that all the staple character ​accouterments are present, the ex-wife, the kids he struggles to see and Internal affairs is breathing down his neck. Now one may criticize these clichés but with the hard-bitten character of Conklin, anything other than this milieu wouldn’t seem right.

The plot revolves around Conklin and his partner Charlie Vincent (Andy Garcia) having to return an arrested Yakuza member, Sato (played by Yūsaku Matsuda in what would be his final role, Scott dedicated the film to him) to Japan. Conklin and Vincent witness Sato execute a couple of elder Yakuza members in a New York restaurant before chasing him down through the meat packing district (a classic 80s action location).

Things do not go as planned in Japan as Sato gets away and Conklin and Vincent thus have to extend their stay in order to bring him back in.

As Conklin and Vincent descend the underworld of Osaka in pursuit of Sato, we learn that Sato is an upstart thug, disrespecting the code of the Yakuza and is the enemy of the criminal gang’s older generation. Hunter and hunted are in some ways the mirror image of each other, both Conklin and Sato hold their superiors in contempt and do things their own way. Conklin’s disdain of authority is hammered home, from the illegal street racing, Internal Affairs troubles, and willingness to physically assault detained suspects.  He is the NYPD’s own Sato, the ends always justify the means.

Joining Conklin and Vincent on their pursuit of Sato is a by-the-book Osaka Inspector Masahiro Matsumoto, (played by Ken Takakura) ostensibly assigned to babysit the two NYPD detectives, but he finds this task made increasingly difficult by both Conklin’s disregard for due process and Sato’s own nefarious acts. Kate Capshaw pops up as nightclub hostess Joyce, a kind of Athena to Conklin’s Odysseus, warning Conklin that he’s out of his depth and that there’s a Yakuza war going on around them that he would be best avoiding. Andy Garcia’s Detective Vincent meets an untimely end highlighting how the hunter is actually the hunted and at that point the story pivots from a simple cat and mouse game, into a revenge driven tale.

The character arc of Douglas’ Conklin is inverse to that of Takakura’s Masa, as events overtake Masa’s strong sense of duty to his superiors and adherence to the rules, he instead feels honour bound to assist Conklin in bringing Charlie’s killer to at least some form of justice, whatever that may be.  We see Conklin meanwhile, start to make some decisions that go against his usual instinct, and what atonement he has, holds true to Kafka’s advice about siding with the world against yourself.

The parallels between Black Rain and one of Ridley Scott’s more famous films, Blade Runner, are hard to miss. The blood orange, smoke stacked skyline as Conklin and Vincent land in Japan and the dark, brooding, neon lit streets of Osaka are the real, living, breathing futuristic Los Angeles streets in which Deckard chases down Replicants.  Special mention must go to Jan de Bont, as we viewers are given a front row seat to a place that is simultaneously of this world, but altogether otherworldly.

Even during the early chase through the meat market in Manhattan, de Bont back-lights the scene with 8ft fluorescent tubing, allowing Scott to incorporate his beloved harsh light bursting through steam or smoke, setting the tone for what we later encounter in Japan, giving many scenes a beautifully ethereal feel.  The use of side lighting like noirish Venetian blinds in Black Rain are also more signature Scott elements one remembers well from Blade Runner, and an Osaka nightclub offers the opportunity for the actors to be lit from below , which Scott often uses to great effect, as he incorporates highly detailed backgrounds and the underlight helps our focus stay with the actor.

The labyrinthine streets of Osaka, and the bureaucracy of the Japanese police mirror the trail Deckard follows through the grim streets of LA and the lofty offices of the massive Tyrell Corporation.  Sato’s disregard for the Yakuza code mirroring Roy Batty’s refusal to adhere to his own pre-programmed rules, one questing for a life without bosses, the other questing just for more life. Purple hues and wet streets adorn both films as our respective hunters chase down their prey. The questions raised about who and what Deckard truly is, are reflected at various points in Black Rain, particularly in a poignant scene with Masa as Conklin has to consider that he is perhaps not much different from the criminals he goes after.  It is this inquiry into Conklin’s true character that sets up the redemption we later witness. 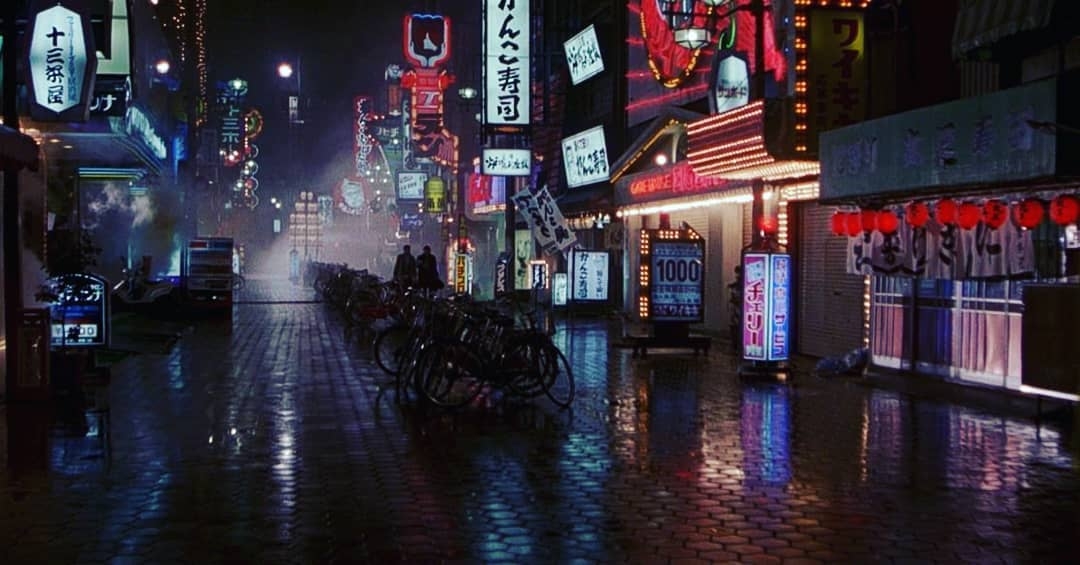 One could accuse Black Rain of suffering from ‘white saviour’ syndrome, but that would be an injustice. Conklin requires plenty of assistance and at one point has to enter into a Faustian pact with some locals.  He also needs Masa more than he cares to admit. The overbearing Japanese way of doings that Conklin is at odds with for most of the movie,  also eventually wins out and the image of Japan presented as a duty orientated, commercial behemoth reflects the economic anxiety of the period, as Michael Douglas states on one of the special edition’s accompanying documentaries, the perception in the USA at the time was that Japan’s economy was just a steam roller, that was in direct competition with America.  Many of the scenes with extras depict them at work in some form or other, emphasizing the industrious perception of the country. At one point we also learn where the title of the film comes from, as an old school Yakuza recalls how the nuclear bomb dropped by America on his home city of Hiroshima, made the rain turn black.

The soundtrack is damn good too with Hans Zimmer holding the reins and a superb power ballad by Gregg Allman. There are snippets of Iggy Pop, UB40 and an astounding fusion track by Ryuichi Sakamoto called Laserman, which is like nothing you’ve ever heard before, just beautiful.

Overall, on this it’s 30th anniversary, the neo-noir Black Rain deserves reconsideration and I much prefer it to Ridley Scott’s later bigger, brasher and more well-known films. A smaller budget and no CGI are often more of an inspiration than a constraint, and Black Rain demonstrates this perfectly.  It has a memorable anti-hero driven along by a Michael Douglas at the top of his game and set design that is a feast for the eyes.  A film that encompasses revenge and redemption, pathos and the odd moment of levity, I just wish I could experience watching it for the first time again.