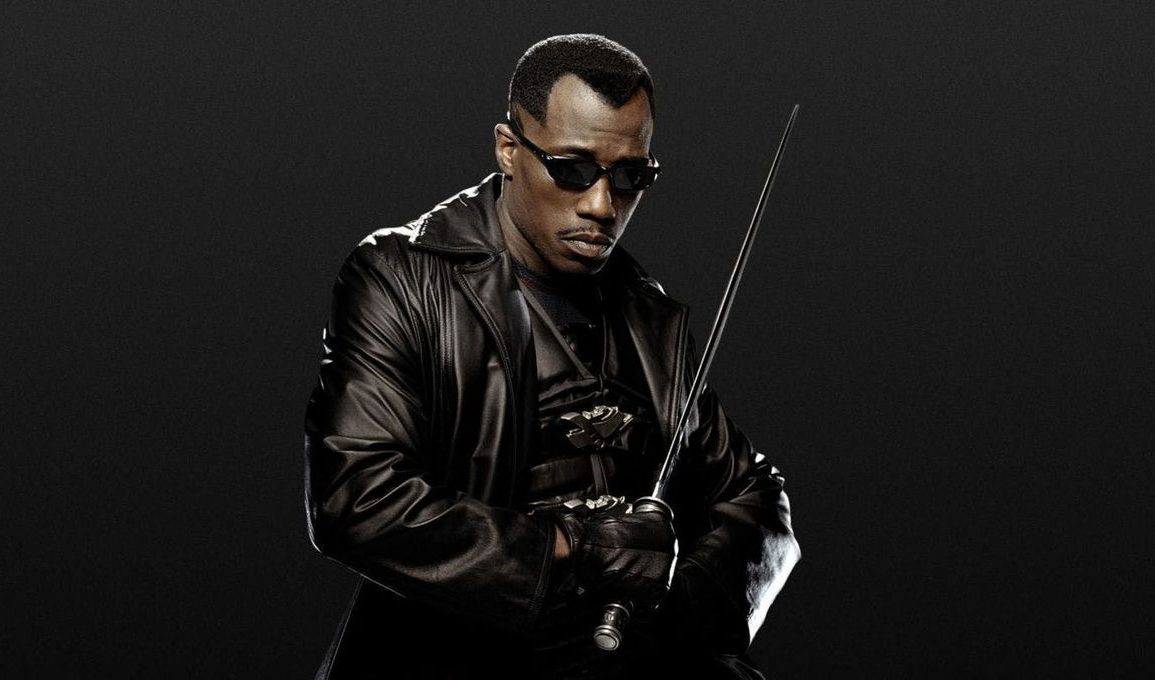 Before the X-Men or the characters of the MCU stalked our cinemas, there was Blade. The Daywalker, played to perfection by Wesley Snipes, was a new kind of comic book hero – one steeped in the supernatural. Instead of fighting intergalactic despots and terrestrial madmen, he fought…vampires.  For the second film, he found himself fighting alongside vampires, facing a new threat.  The question is, which Blade flick is better? 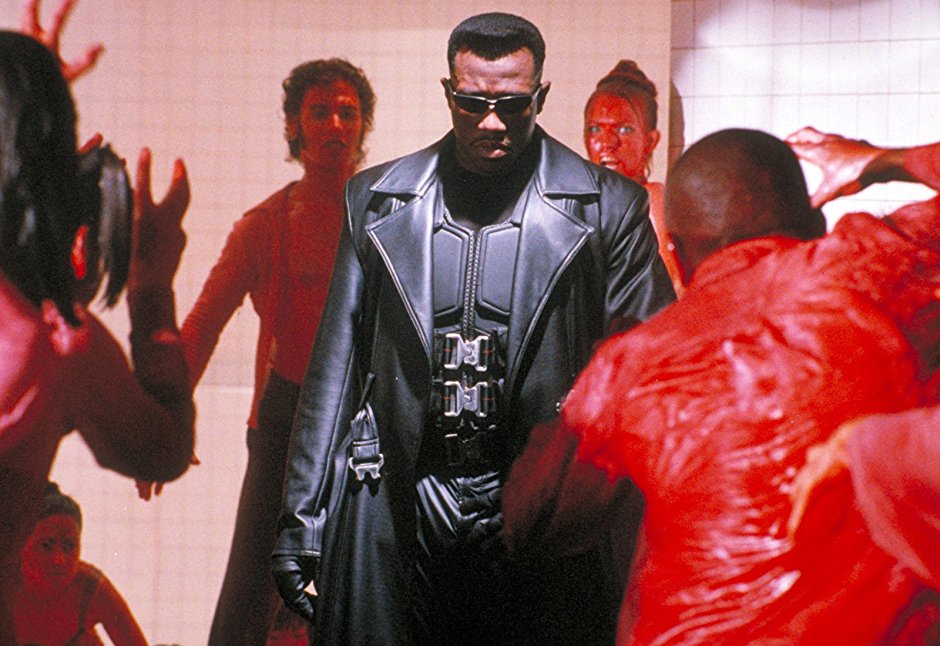 Story: The first Blade film feels very much like a 1940’s crime noir film, albeit one told in the modern era. The film is very dark (which makes sense – it’s vampires), and Blade is presented as a bit of an anti-hero.  He’s not a character who has these big noble intentions or is the sort who is going to rescue kittens out of trees – this life has been thrust on him. He is basically doing what he does out of a sense of vengeance. The writers are smart in introducing a female character, in Dr. Jenson – it is easier to learn and digest Blade’s world through the eyes of another human, who takes in the bizarre darkness of Blade’s world in the same vein that we would. While the movie follows a somewhat formulaic pathway, it does so with style and panache, giving us a hipper version of the world of modern-day vampires before the vampire craze that would spurn properties like the Twilight series and the Vampire Diaries.

Villain: No one embodies the modern-era vampire better than Stephen Dorff’s Deacon Frost. Dressing as a yuppie, he sneers at tradition and has greater goals in mind than his older brethren.  He has no problems murdering an elder (and more respected) vampire.  His goals are lofty, and he wants to attain power, something the older and more regal vampires are afraid of.  In every sense, he embodies the new generation, who rejects the old ways and tries to lead his people into a new golden age, where vampires openly rule humans.  As he not pure-blood, he is openly sneered at by the “purer” vampires, walking the same path as some of the great Shakespeare villains, such as King Lear’s Edmund. While easily dismissed at first glance, Frost is a dangerous foe, one of the rare villains in a comic book movie who ultimately achieves his plot-long goal, if only for an instant.

Action: This is not a traditional action film that I would associate with Wesley Snipes.  As the film fears more like a noir film than an action one, there aren’t a lot of big action pieces.  The only two parts that stick in my mind are the opening scene in the rave club and the final confrontation between Blade and Frost.  The rave scene is great, punctuated by techno beats as Snipes uses guns, martial arts, and of course, blades, to take on a horde of the undead. The very way that Blade is introduced facing off with the vampires as they circle him uncertainly is a great first testimony to how fearsome Blade is.  Of course, the scene also does well in showcasing Snipes’ martial arts prowess.  For the final fight, Blade again faces a bevy of skilled opponents before Frost. The scene is a bit of a letdown, as Dorff cannot match Snipes’ skill and even though they try to power him up, the fight is a little too short for the rivalry that has been built up.  Still, you get that great part where Snipes spin kicks a vial into Frost’s head that helps blow him up – nice. 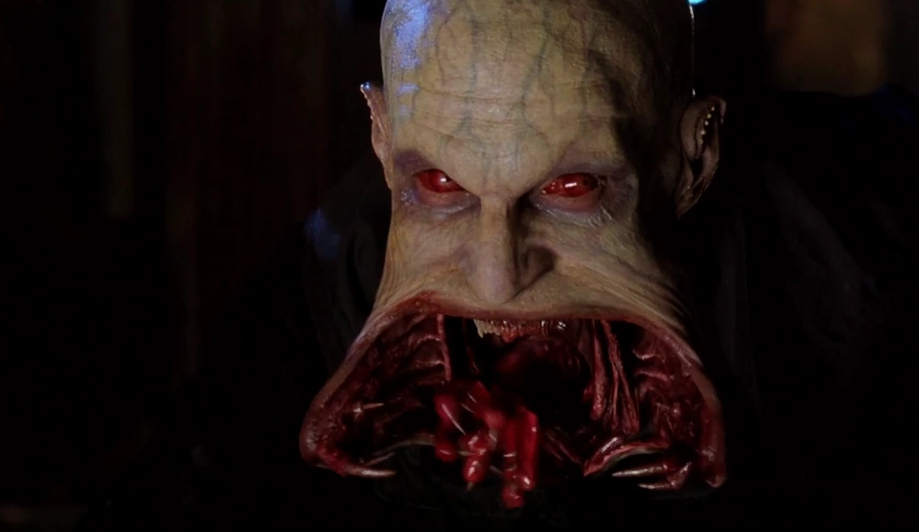 Story: For the second film, the filmmakers decided to go into a new direction: what if Blade had to team-up with vampires to face a new threat?  In my opinion, this was a brilliant move.  You have these characters who you know could turn on Blade at any moment, so there’s always this innate tension rife throughout the story.  Secondly, the introduction of the Reapers and making them such dangerous opponents – again, brilliant.  Third, re-introducing the Abraham Whistler character, but this time making him untrustworthy because he had previously been turned into a vampire – another great move.  The filmmakers really up the tension throughout the film and make this less of a noir allegory for the modern capitalistic day and more of a traditional straight-up action flick with twists, turns and danger around every corner.  While it isn’t as sleek or stylish as the first film, it definitely ups the horror and suspense.

Villain: The Reapers are truly one-of-a-kind.  While they lack the charm and sophistication of Deacon Frost, they are undeniably dangerous, an animalistic killing machine that has no problems attacking vampire or human. Yet, they are somehow sympathetic, as they are a result of a botched vampire experiment and truly are unable to resist the urges they feel to attack and feed – in a way, they are more like zombies than vampires. I also really enjoy their look, the whole Nosferatu resemblance, and how their mouths split to unleash the terror within.  They are also tougher to kill, which just makes them an even more dangerous foe.  Their leader is played by Luke Goss, who has his own reasons for bearing a grudge against the vamps – I always thought Goss was underrated for what he brings to the table. In this film, he perfectly walks the line between pathos and hatred. The Reapers are some of the scariest villains in any comic book movie and definitely are one of my favourites.

Action:  While it seems to have more action than the first film, again this movie has two big action set pieces in my mind – the scene in the House of Pain and the end battle.  I will say that I was a tad disappointed that they returned to another nightclub setting after the iconic opening of the first film – that feeling is somewhat diminished by the fact that they call the place “The House of Pain” (which I think is great) and the sheer epic nature of the battle within.  You have sheer pandemonium with multiple battles both within and outside the club with casualties on both sides.  The second piece is at the end of the film, where you have the final confrontation between the vampires, Luke Goss’ character and Blade.  Again, you have multiple fights and confrontations, with a great fight between Blade and Reinhardt’s vampire horde (and includes a kick-ass soundtrack to boot).  Goss’ Nomak is a worthy final opponent for Blade, with the villain’s final demise had as much to do with his desire for death as Blade besting him.

The first Blade movie was undeniably a trend-setter, showing that a comic book property could exist in the shadows instead of being bright and cheery. While I find the first film is more sophisticated and stylish, I give the nod to the second film.  There is just more cool things happening, and I feel that the Blade film makes sense more with a horror than a noir vibe, though I applaud the first film for its ingenuity and daring to buck trends. Blade helped drag the vampire genre into a new generation and the second film displayed a bevy of twists, turns and thrills, delivering the sort of punch that most would not expect of a movie of that kind.