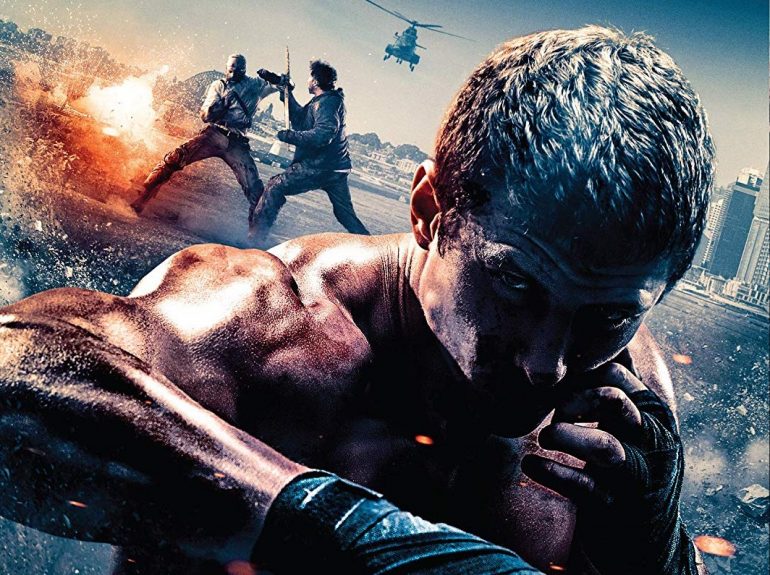 Blood, Sweat, and Terrors has its stronger entries and its weaker links. There’s no connective tissue to tie them together, but it’s nice to see some real talent at work here, and it’s a great way to finally see Bernhardt’s long-on-the-shelf Fetch. It’s geared more for action than horror fans.

Review: A series of bone crunching short films soaked in blood, gore, violence, and nudity pack Blood, Sweat, and Terrors. The first short “Empire of Dirt” features a haunted hitman who is cursed to keep living and seeing his victims; this one is the most sexually explicit and disturbing, with creepy horror vibes all throughout.

The second short “Awesome Runaway” is an amusing one-take stunt exercise about a prisoner who is injected with drugs and escapes, laying waste to his captors, but what we’re seeing is actually his drug-induced fantasy, and not his reality. “Flow” is the least impressive short of the collection: Two female soldiers on their period are on the frontline of a battle and bicker over the fact that they’re fresh out of tampons.

“Jacob’s Wrath” is an unusual surreal psychological piece about a man named Jacob whose daughter was killed by her boyfriend, and Jacob plunges into a deep, apocalyptic depression, and plans his revenge. The post-plague apocalypse short “Get Some” focuses on a reality TV personality who roams the urban wastelands of the UK with his assorted weapons and camera and sound crew. A scientist (played by John Hannah) is on a ride along with the crew when the crap hits the fan and the infected “outsiders” (raging zombies) overwhelm them, dwindling their number to just two. The short, from director Joe Horton, ends on a cliffhanger, but it was one of the few pieces in this collection that felt as though it was taken from a feature film, so it’s easy to imagine it being expanded into a feature.

“Express Delivery” is the most impressive short of the bunch (but with the worst sound, ironically) with a rascal (played by Beau Fowler) who gets out of the trunk of a car where he’s been kept prisoner, and he engages in an epic fight with the tough driver of the car. “Olga” is a sobering action piece about a Russian girl who goes out for revenge against the mob for making her kill her father on Christmas morning as punishment over an unpaid debt. “Turncoat” is an ugly episode featuring a bucket of gore, and Daniel Bernhardt’s 2007 short “Fetch” features future director of Deadpool David Leitch as a private eye with a cold on his latest case.

As per custom with most short film compilations, Blood, Sweat, and Terrors has its stronger entries and its weaker links. There’s no connective tissue to tie them together, but it’s nice to see some real talent at work here, and it’s a great way to finally see Bernhardt’s long-on-the-shelf Fetch. It’s geared more for action than horror fans.

The DVD is out today in stores from RLJE.