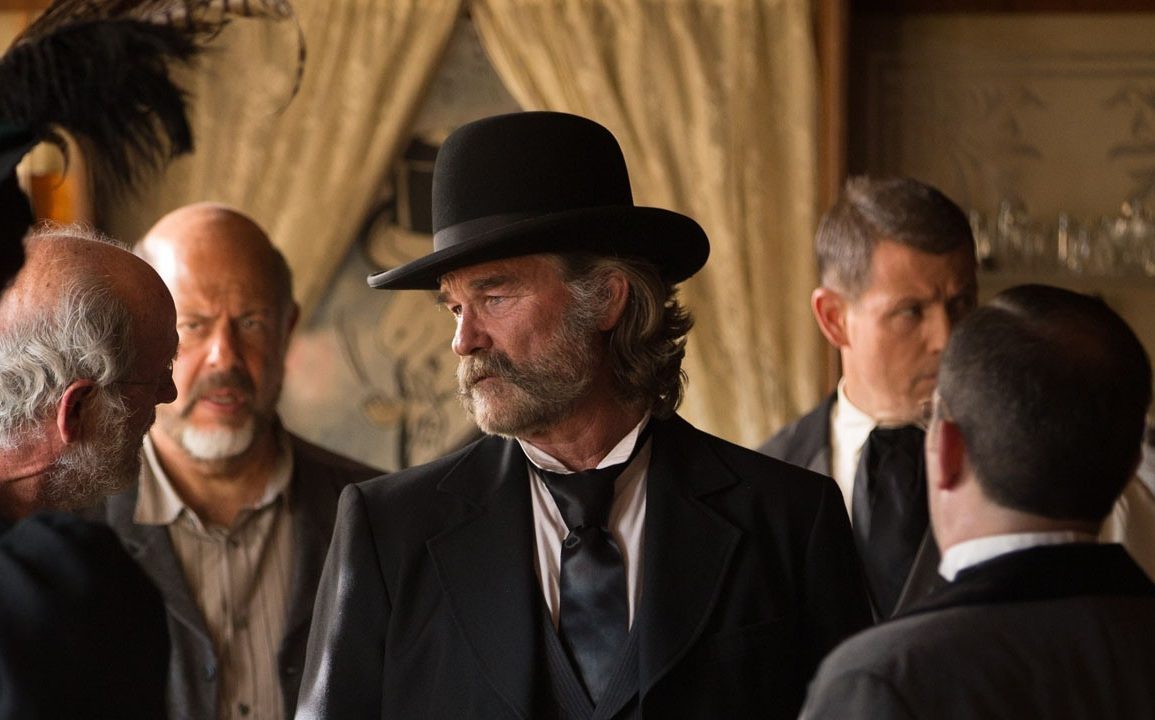 It’s gorgeous and horrifying. It’s one of the best films of the year and will stand the test of time.

Plot: When a group of cannibal savages kidnaps settlers from the small town of Bright Hope, an unlikely team of gunslingers, led by Sheriff Franklin Hunt, sets out to bring them home. But their enemy is more ruthless than anyone could have imagined, putting their mission – and survival itself – in serious jeopardy. This is a gritty action-packed thriller chronicling a terrifying rescue mission in the Old West.

Review: The tone is set when the first throats are slit. The movie starts, and two unkempt bandits raid a camp of sleeping travellers, and the bandits – Buddy (Sid Haig) and Purvis (David Arquette) – murder everyone before any of them have a chance to stir. After pilfering their meager wares, the throat cutters wander into what feels like a forbidden clearing marked by strange skulls and rock formations. It only takes a second for Buddy and Purvis to realize that they’ve entered into forbidden territory, and in a blink they’re being attacked by a troglodyte sentry. It’s over in a flash.

The movie moves into the nearest town – five days away from Buddy and Purvis’s unfortunate encounter – and we meet Sheriff Franklin Hunt (Kurt Russell) and several members of the small settlement. Arthur O’ Dwyer (Patrick Wilson) has recently become invalid in a roofing accident, and his doctor wife Samantha (Lili Simmons) is a beautiful young woman who has taken out a fair amount of bullets from the legs of itchy drifters the sheriff has shot. There’s also Brooder (Matthew Fox), a dapper gunslinger who once had intentions to court Samantha, but now that she’s happily married to Arthur, there’s some friction there that can’t be denied.

When Sheriff Hunt’s second deputy, the old timer Chicory (Richard Jenkins), rides back into town to report on a suspicious drifter, Hunt goes straight to the saloon where Purvis is trying to have a drink. After an altercation over minced words, Purvis is shot in the leg and taken to jail for being such a contrary responder. Mrs. O’Dwyer is called in to perform surgery on Purvis’s wound, but sometime during the night while she’s operating on him, something mighty conspicuous happens: the entire Sheriff’s station is raided by the same troglodytes that Purvis slighted. Purvis is taken, as well as the young deputy on duty, and Mrs. O’Dwyer too.

Come morning, Sheriff Hunt holds a town meeting, and since the only clue as to who abducted the missing persons is an oddly crafted arrow, the town Indian is called in to make an assessment: What he tells them is more than foreboding – it’s downright sinister. He knows of a small, forgotten race of men who live in caves, and they’re so brutal and savage that they’d “rape and eat their own mothers.” It’s no wonder that Sheriff Hunt can only summon a few good men to lead a search and rescue party. In for the grim adventure is the hobbled Arthur O’Dwyer, Brooder, and trusty old Chicory, and that’s it. When the movie introduces us to another character named Mr. Wallington (played by action movie veteran Michael Pare), it’s only to tease us, because Mr. Wallington doesn’t join the posse. You know that the posse is going to need all the help it can get, but once the four good men head off into the wilderness, there’s no turning back and no back-up plan.

Bone Tomahawk is about to get serious. The trek through the untamed west to reach the caves where goodness knows what is going on with the vile trogs is the longest act in the film. The camera and the story stays with Hunt, O’Dwyer, Chicory, and Brooder. We get to know these guys and how different each of them is from each other. The beauty of this film is how nuanced it is, how perfect the language sounds coming from their mouths.

We know with our raw intuition that the movie is headed to the bowels of hell, but these guys have no idea what they’re in for. When they eventually get there (not necessarily at the same time: remember that O’Dwyer is crippled), the movie kicks into that supercharged, but balanced pace where anything can happen to anyone and that your eyes will witness the startling horrors of whatever the devil can imagine. This is a movie that fuses the two genres of the double-barreled, boot wearing, whiskey swigging western to the gut munching, decapitating, blood spilling, and eye gouging horror film and somehow becomes the first almost perfect movie to do that. It’s a miracle, but shut your eyes tight if you can’t handle your gore. Even a hardened horror movie vet like myself couldn’t help but drop my jaw and skew my face in disgust during several of the most potent scenes in the film.

The movie’s writer and director is novelist S. Craig Zahler, who is clearly a filmmaker to watch out for. By the evidence of Bone Tomahawk, he’s our next great director, our next auteur. He gives every single character everything they need to have an actor come in there and sing their hearts out and be great. The standout performance goes to Richard Jenkins, who deserves (at the every least) an Oscar nomination. Even though Kurt Russell (who’s awesome in this) is predominantly featured on the poster, the movie is really an ensemble piece. It’s gorgeous and horrifying. It’s one of the best films of the year and will stand the test of time.