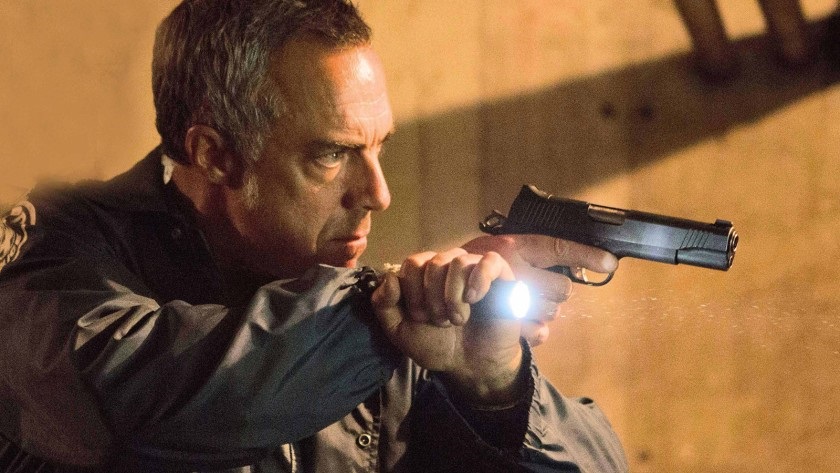 An instant classic that does lots for both the Amazon Prime streaming brand and for the action/crime/mystery genre while also being a cool book adaptation. An off-the-charts, brave thrillride in an incredibly created off-beat universe.

Plot: Based on the series of books by Michael Connelly (who also oversees the show itself), the title LAPD detective character (Titus Welliver, The Last Ship) investigates morbid cold case crimes such as a 13-year-old’s death while enduring a courtroom trial by attorney Chandler (Mimi Rogers, Austin Powers) for his brutal killing of a dangerous serial killer.

Review: Whenever something is based on a book, I always keep both the book and film/TV version as separate entities as at the end of the day everything should be judged on its own accord, whether faithful or not. I had read up to three of Connelly’s books and always adored them for their atmosphere, easy reading style and gritty mayhem. Connolly wasn’t exactly an over-the-top kind of guy like James Patterson but he did have various social commentary and vivid descriptions of the gritty investigation process. How did this fare after previous works of his like Bloodwork didn’t exactly land well? Pretty damn well I’ll say especially if you need something as brutal as Breaking Bad, Chicago P.D., NYPD Blue, 24, The Shield, Homicide, The Wire, Major Crimes, Criminal Minds or Law & Order: SVU!

Season 1 involves city politics being threatened by the district attorney’s agenda and deciphering whether or not a serial killer’s link to a cold case has any legitimacy. Season 2 details a Mulholland Drive murder that has be ties to the Albanian mob, crooked cops and the porn film industry. Season 3 dives into Bosch’s hunch that he might actually find the murderer of an earlier case he tried to solve. Season 4 covers the quest to figure out a suspicious murder of a civil rights attorney who was repping a victim of the LAPD’s methods as well as the death of someone else close to Bosch. Season 5 notes an unlikely alliance between Bosch and attorney Chandler when another murder conviction unexpectedly calls into question his previous cases and endangers his career! Season 6 has a medical physicist killed and L.A. is threatened when the dead man’s radioactive material is found missing. Season 7 wraps up the saga with Bosch pursuing an arson murderer and having unseen forces put him in peril while two other key characters pursue their own complicated legal affairs.

Fans of unsolved real-life crime novels and podcasts might dig as much as those looking for far more believable CSI and Cold Case type entertainment. No episode ever drags and I found it to be pretty faithful based on the 5 books I read prior especially getting the style of the novel City of Bones down to a T. The political underbelly and legal cases help enforce (no pun!) the plot to become more tangled up without being annoying, confusing or rant-filled and always lead to one of several shocking plot twists. The media is always an intriguing part of each affair and helps build the world instead of feeling like endless yet gratuitous opposition or like a cheap plot device.

The cast is phenomenal and allows plenty of opportunity for each character to have their own development without having too many peeps for any viewer to keep track of or not get a sense of the main plot that’s developing. It’s an altogether well-paced combination of grit, intriguing personas and complex mysteries that both serve the genre well, show grey areas that prove for bigger consequences and don’t resort to black-and-white arguments. Each season makes sure that it’s own mystery doesn’t overstay its welcome or become padded out with a needless filler episode. Each character has a new predicament connected to their previous season appearance and end up having to face the music for anything whether its harmless or was foreshadowed as a growing cause for concern.

This all helps the show avoid plot devices, overdone cliches and propels to the finish line fully intact for all seven years. If you want the brutal noirish nature of films like L.A. Confidential and Se7en and interconnected with other hard-boiled cop films like Serpico and Street Kings, have at it 100%. You might even find it to have the same level of detail as other L.A. pot-boilers like Heat and amount of tension-fueled character study like Dog Day Afternoon. I keep reading that there’s a spin-off show in production so I definitely think that will raise the bar for this genre while keep showcasing those pre-established fascinating characters in full gear.