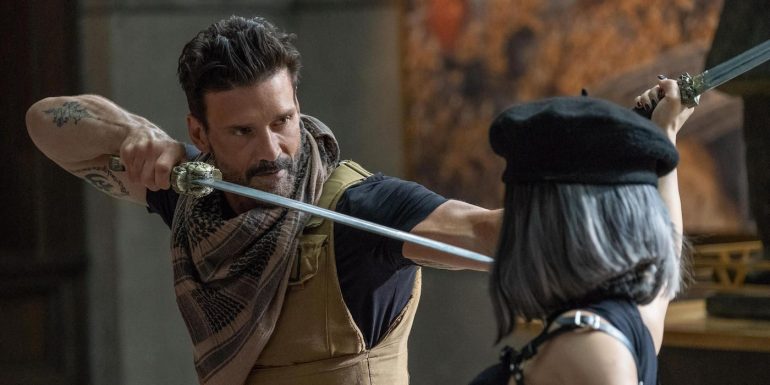 Boss Level takes us on a crazy, wacky, hilarious and violent ride that is a must-see for action fans.

Plot: A retired military operative finds himself in a never-ending time loop on the day of his death.

Review: One day director Joe Carnahan must’ve watched Groundhog Day and decided that it needed gunplay… and swordfights. And the end result is his superlatively over-the-top, mind-bending time-travel-actioner, Boss Level.

The marketing for this film is damn-near perfect – it’s funny, violent, weird, and also, rather unexpectedly, has a heart. The story reads like this: Delta Force Captain Roy Pulver (Grillo) finds himself reliving the same day over and over again. And each day, he’s hunted, and eventually killed, by a team of quirky assassins for reasons he doesn’t know or can’t understand. Like a video game, every time Roy defeats one of these killers, he progresses a little further into the day and learns a little more about the deadly conspiracy that’s at play that’s plaguing his life. It doesn’t take a Harry Bosch-like sleuth to figure out that the shady government agency, run by the mysterious Colonel Ventor (Gibson), that’s employed Roy’s ex-wife Jemma (Watts) to build them a time-defying machine known as The Osiris Spindle is behind it.

With the story, mood, and pace set up rather effectively in the first five minutes, Boss Level takes us on a crazy, wacky, hilarious and violent ride – and everyone involved seems fully committed to bringing this twisted tale to life.

Frank Grillo is superb as our hero, Roy, and thanks to his imposing physique and quick trigger finger, he’s utterly believable in the film’s many explosive action scenes. He also gets to flex his acting muscles when the film’s unexpectedly moving sub plot kicks in. Grillo is one talented SOB who can act AND perform outlandish action scenes. He has to carry this film’s crazy premise on his muscular shoulders, and he does it with ease. Well done!

Mel Gibson as the villain Ventor. What can I say? Mel is a legendary actor and the film burns bright whenever he comes on screen. His villain is cold-blooded, but also three-dimensional – sure he’s after world domination, but he believes he’s doing it for the right reason. And Gibson sells it perfectly, with his weary face and take-no-shit- attitude.

Naomi Watts is pretty good in her role as Roy’s long suffering ex, and all of her best scenes are with Grillo, and the two have a good chemistry.

Funnyman Will Sasso turns up as one of Gibson’s Heavies – and he has some of the funniest lines, and one of the better deaths that had the audience in my screening laughing out loud!

Then there’s the assassins Ventor sends after Roy. Ventor says he wants killers who are off the grid, weird. Real freaks. And he gets them. Each one of these dynamic assassins is odd to say the least, and all of them are highly creative at killing, but my favourite would have to be Guan Yin (Selina Lo) – a lethal sword master who hides her ruthlessness behind her beauty. This character has a catchphrase that’s funny, and ultimately tragic when it’s used against her, that makes her highly memorable. I think she’d also hold the record for murdering Roy the most times.

Director Joe Carnahan does a good job keeping the film moving and shooting the action set-pieces with a fresh eye and flair for detail. I don’t recall any excessive shaky-cam or annoying camera tricks. I hope Carnahan does more, dark, character-centric films in the future like this.

My one complaint with Boss Level would be that the CGI that appears throughout. Some is very good. And some… not so good. All the gore effects and tech stuff looks fine, but some of the explosions look a little too clean and precise, but I’m being picky.

The score by Clinton Shorter ain’t half bad either and the cinematography, by Juan Miguel Azpiroz, is fittingly dark and stylish.

Overall, Boss Level has all the makings of a cult film, from its violence, to its tone, but it’s the performances that set it apart from the bland action films we see today. Thanks to the top talent on show (Grillo, Gibson, Watts), and Carnahan’s riotous action scenes, hopefully the film will find its audience in a field populated by PG-rated superheroes movies and cookie-cutter rom-coms. I had a blast with Boss Level and I recommend everyone check it out!