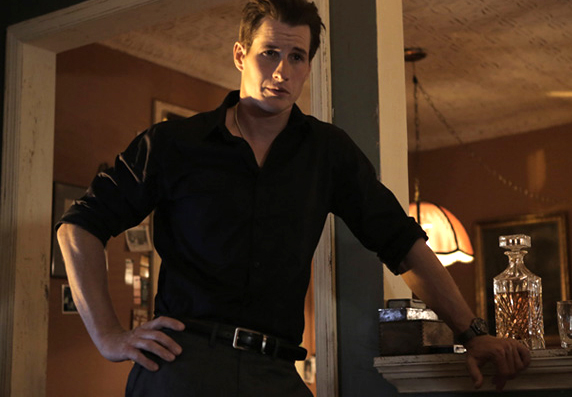 Currently he can be seen as Dr. Drew Alister on the NBC drama The Night Shift, and as the lead in the new crime drama film Zarra’s Law. Brendan was kind enough to speak to us about the film and his career.

Your new film Zarra’s Law is based on a true story; in a role like this do you feel there’s more pressure playing a real life character?

I know it was based on real guys that the writer knew, but we had taken so many creative liberties that we had always thought of it as doing it our own way so this was one where there wasn’t too much pressure. Obviously you have the script as your template and you take what the character is going through as far as situations and relationships and try and make it as authentic as possible.

With so many mob movies such as The Godfather and a show like The Sopranos (which Tony Sirico was on), being so ingrained in people’s consciousness is it an effort to be sure not to focus on the same sort of themes while you are filming?

Yeah, you watch all those shows and films and see what they did and why they worked and see what you can learn and take from those that will benefit your character, your story and film as a whole. At the same time though, you want to be careful not to simply copy those, it’s not possible. You are going to fail and you will fail miserably. You want to do your own thing and put your stamp on it in the best way that you know how and obviously that comes down to everyone working together. My responsibility is my character – working out those scenes and making them the best as possible and as an actor there is only so much that you can control so you have to just focus on your own thing, so with that kind of pressure you are aware of it and you feel it but there is little you can do about it so you just hope you are working with some great people; writers, directors and DPs who are going to steer it in the direction so it stands out on its own. A film like this has a relatively small budget and shooting schedule, so although you don’t go into it limiting yourself, but there is a reality to our time-frame and resources compared to The Godfather or any of these other films, so you try make look a little bigger and better than what you have then you should walk away having been successful. That’s what we tried to do.

I think you succeeded…

Yeah, it’s certainly got that mafia and mob aspect to it, but is also a bit of a whodunit in terms of figuring out what has happened and the fallout from that. How it is affecting both my character Gaetano and Tony’s role as my uncle, and pulling us into different directions of the people we want to be. You always try to play the humanity of it and let the other stuff on the page do its own work.

You mentioned a shorter shooting schedule and lesser budget. Do you find as an actor it forces you to work a bit more? For example, if you had unlimited budget and months to shadow a lawyer or go on a ride-along with the police it may help see how a real life counterpart would act and get more of an idea of the character. By not having the benefit of that, does it make it tougher for you or do you find that extra challenge exciting?

It certainly makes it tougher but it does make it more exciting as well. Acting is a muscle and if you are always exercising it and you have the right game plan, you will need less and less time to be able to get into character. There are certain things that if you had the time to do would be very beneficial, like you said, a ride along or training to get into shape, riding a horse – that stuff I think is invaluable because it gets you into a mind-set. Imagination is a hugely powerful tool, but if you were playing the part of a soldier, nothing would be better than doing a boot camp.

So it’s one of those things where I like the pace of it. You are always working and going and forced to be efficient – there is no sort of down time, and I certainly like that aspect of it. But at the same time, every once and awhile you get that feeling of ‘man, we need more time on that scene’. You can feel as though you are not giving the scene or the film it’s due and there is always that middle ground – sometimes big budget movies can drag and really take a long time and the shorter films which are go, go, go, go. The sad part is it’s the mid-budget films that are disappearing. They really struck a balance between being efficient and not spending too much money, but at the same time making sure that you have the money and resources to make the film that needs to be put out there.

I liked how the film is actually shot in New York rather than say Toronto or Vancouver. Was that important to the production and add an authenticity and grittiness to it?

Oh I think so. That was one thing I was really looking forward to when I realized we were shooting in New York. It was something I had always wanted to do and it is something that for my character was totally invaluable. Accents are not my strongest suit so, as we discussed with little prep time, to get an Italian New York accent I was a little worried, but by just walking the streets of New York and listening and looking at the attitudes and the swagger and just soaking up the intangibles that are hard to duplicate, I feel I did justice to the character. I think if we had shot that in Toronto I would have been doomed. Of course the second day in New York City shooting in 101 degree weather and wearing a suit, I quickly regretted my decision. (laughs)

No, I really loved it. It was a great experience for me.

You’ve worked on both television and film; do you have a preference?

Artistically film I think still allows you to do and say more, obviously cable has changed the game a bit, network television you’re still limited on some levels but at the same time, I am on The Night Shift now, and it is probably the best experience I have ever had.  The cast is just great and I have had so much fun doing it, so it is one of those things that with a family and having made a living at it without needing to bar-tend or fix cars on the side for a living, television is one where you get that season and more consistent paycheck, it reduces the stress level of trying to provide for your family. But at the same time, the grass is always greener on the other side to a certain extent. Doing films is always fun and exciting. I used to be ‘only film, only film – who wants to be a television star?’, but my tune has definitely changed. I am just happy to work on a project with great people and great writing, whether that’s in cinema or television, I’ll do that any day of the week.