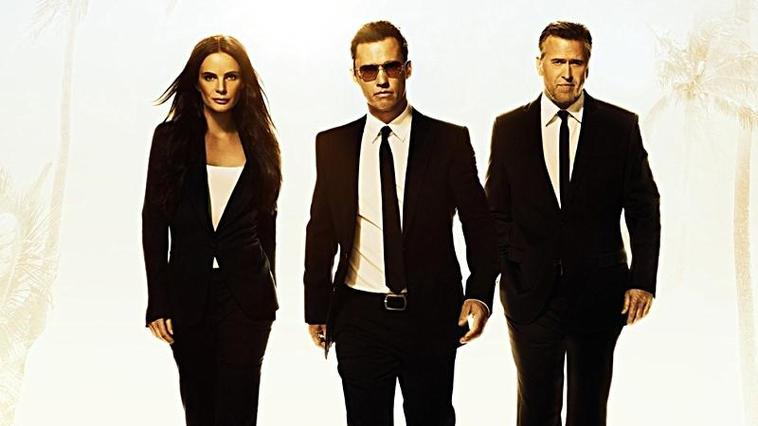 A vibrant dose of comedic action espionage back when summer cable TV shows were a fun event to look forward to annually.

I first got into the show back when the second season was being rerun on USA Network and enjoyed it so much that I later went and saw how it all began before Season 3 started. The whole show is essentially fun buddy genre romp and is an amusing version of The Equalizer, only this time, the vigilante/anti-hero is a fugitive who narrates the whacky action going on, only wounds people to avoid the heat (sort of like a PG version of the Grand Theft Auto videogames), runs away from Commando type cartoonish (yet welcome) explosions and the visual look of the show isn’t any different from any other popular Florida-based shows (i.e. CSI: Miami, Miami Vice), only it’s done as an amusing self-aware nod.

It was instantly easy to see why the comedy gelled; the show was a rival for other addicting spy shows like 24 and reinvented the USA Network as a place for amusing romps that aired new episodes each summer. Instead of the guilty pleasures or laughable trash they had aired before (and later after), they instead were using this, In Plain Sight, Monk and Psych to complement their new channel’s slogan “Characters Welcome.” It worked rather well for a time, but I later stopped bothering with it after being unimpressed with the Season 4 premiere and getting addicted with other (and better) shows during my first few years in college. I later went back and finished it and was glad I did as it and have to say it was all worth seeing; no matter the season or episode, it was always manic energy and low-brow guffaws all while carefully trying to make everyone in its target audience happy. Any time, I saw another spy action-comedy years afterwards like Chuck, White Collar, Scorpion or Human Target, it was pretty easy to see how those shows owed their existence to this O.G. All the seasons are streaming on places like Hulu and I’m sure you can find any home media set discounted. The show also has awesome recurring and guest stars playing clients, witnesses, allies, traitors or villains of the week such as Danny Trejo (Heat), Andrew Divoff (Wishmaster), Sonja Sohn (The Wire), Lucy Lawless (Xena), Tricia Helfer (Battlestar Galactica), Tyne Daly (Cagney & Lacey), Robert Patrck (T2: Judgment Day), Carlos Bernard (24), Lauren Stamile (Community), Alex Carter (CSI), Richard Schiff (The West Wing), Max Martini (The Unit), Chris Vance (Prison Break), Marc Macauley (Bad Boys), Callie Thorne (Homicide), Kristanna Loken (T3), John C. McGinley (Scrubs), Danny Pino (Cold Case), Moon Bloodgood (T4: Salvation), Richard Kind (Spin City), Clarence Williams III (The Mod Squad), Eric Roberts (Runaway Train), Jay Karnes (The Shield), Al Sapienza (Sopranos), Jere Burns (Justified), Robert Wisdom (Volcano), John-Pyder Ferguson (Unforgiven), Todd Stashwick (The Rundown), Johnny Messner (Tears of the Sun) and Michael Shanks (Stargate SG-1). Eat it up while you can because you’ll be glad you did!

Just like Cameron, I also was introduced to the show during the second season thanks to both my dad and brother having mentioned it to me at the time. Ever since then I’ve become a huge fan of this show, not only due to the cast who all showcase here the amount of wit and range that they have, but also the story which takes a familiar trope that we’ve seen a bunch of times and put a creative twist on it. This is one of the few shows that stayed consistent throughout its 7-year run without feeling overlong or drawn out like some shows start to become after a while. Not only was it self-aware at times without resorting to parody, it also delivered some solid action whether it’s the car chases, shootouts, fight scenes, or explosions; this delivered just the right amount for each episode. Another thing I appreciated was while this has certain elements of spy films that we love whether it’s the Bond films particularly with some of the one liners, it never strays away from the story and fits within the characters with their personalities.

Overall, Burn Notice was a show that managed to blend elements of the spy genre with a fun sense of humor to a satisfying degree. Hopefully, someday we’re finally get their own film adaptation of this, because it deserves one!