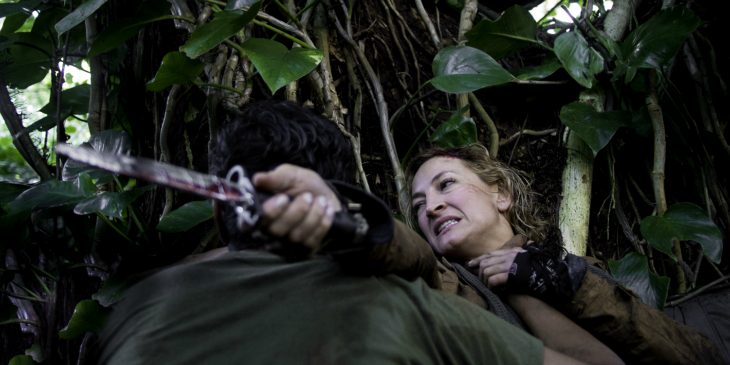 Seek it out if you’re up for a heavily geared score that is bound to challenge your soft pallet for easy music. There’s nothing easy about this music, and that’s the appeal.

Review: Josh Waller’s ultra suspenseful action drama Camino received a rather quiet release earlier this year and it’s a film worth taking a look at, in case you missed it. Action star Zoë Bell from Death Proof and Angel of Death stars as a photojournalist who goes to South America in the 1980’s to hang out with a group of revolutionaries and take photos of them, but her trip turns sideways when she takes photos of one of them murdering a child and trafficking drugs. The group of soldiers turns on her and she has to run through the jungle for her life. It’s a great concept, and the production overcompensates for a low budget by filling the screen with good actors, strong action, and an intense music score by composer Kreng, who also did the score for the horror comedy Cooties last year.

Kreng’s work on the music for Camino is unpredictably unsettling, lyrical (at times), and always edgy. With a shadowy menace lurking in its cues, you can never get comfortable listening to it, and just when it’s at its quietest, it springs heavy shrills and screeching unease into your ears, but that’s not to say it doesn’t have plenty of tracks where the music has a life of its own beyond the film itself. His theme for Camino is memorable, and the final credit piece is a synth wave hybrid that should have you playing it on repeat. For most of the score, he builds character and textures within deep, dark passageways, and then the music surprises you with hopeful clearings with a piano melody or insightful cues that clue you in to the promising scenes it’s underscoring. It’s a sinister score, to be sure, but it should keep you awake and alert if you’re driving down midnight roads.

Lakeshore Records recently released the soundtrack to Camino digitally, and the CD was also just released. Seek it out if you’re up for a heavily geared score that is bound to challenge your soft pallet for easy music. There’s nothing easy about this music, and that’s the appeal.