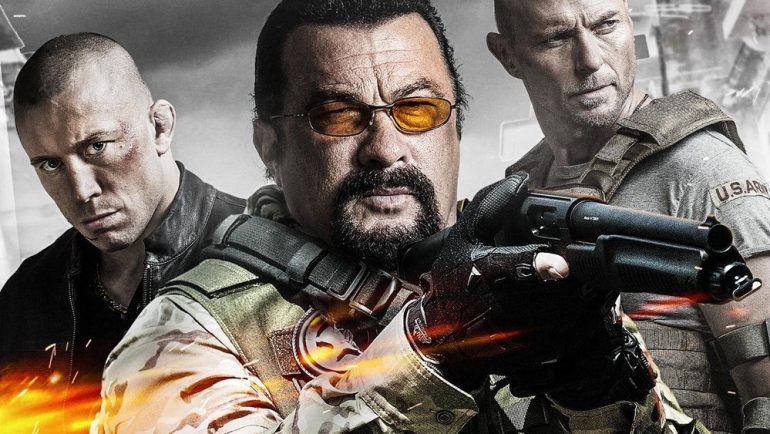 Cartels is better than most recent Seagal efforts but even then there isn’t anything all that memorable about it.

Synopsis: An elite team of DEA agents is assigned to protect a dangerous drug lord and take refuge in a luxury hotel while they await extraction. They soon find themselves at the center of an ambush as the drug lord’s former associates launch an explosive assault on the hotel.

Review: A drug kingpin is captured by a team of US Marshalls, and they’ve got him at a Romanian hotel, waiting for orders on what to do with him. Over the course of 24 hours, the US Marshalls will have to fight for their lives as the hotel comes under assault from hitmen and soldiers paid by the kingpin’s second-in-command (played by UFC fighter George St-Pierre). As the hotel becomes a battleground, another team of agents – led by Harrison (Steven Seagal) – show up and get caught in the crossfire. In the aftermath, Harrison is left to pick up the pieces and get to the bottom of who has betrayed the US Marshalls and who might be working for the kingpin.

I’ll preface this by saying that I saw Cartels theatrically earlier this summer. Every time Steven Seagal has a limited theatrical release, I go out of my way to be there to show my support. In the past three years, he’s had six theatrical (Absolution, Code of Honor, The Asian Connection, End of a Gun, Contract to Kill, and Cartels) releases, which not many people will be aware of. I was there for all six of those. He’s also released as many releases that went straight to video, so this guy has been busy. He passed the point of no return as far as quality goes quite some time ago (his last great one was Urban Justice), but he’s still at it, and if his fans still care you can always look forward to the next 3-6 months when he’ll have another one out. Cartels is one of the average pictures he’s done. He doesn’t do much in it, and his seemingly improvised dialogue is rife with “F”-bombs and double speech. He has a fight with St-Pierre, who astonishingly knocks him down in one quick moment. If you want to see Seagal get floored by an opponent, here’s your chance, but savor it because if you blink you’ll miss it. The story of Cartels sort of makes sense, and action guy Luke Goss has some scenes in it, but the only reason why the film is worth watching is because Seagal is in it, but you won’t be missing much if you skip it. Longtime and long-suffering Seagal collaborator Keoni Waxman directed it.