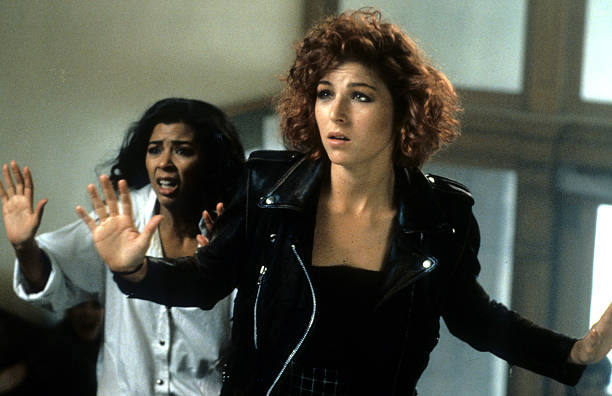 Kino Lorber’s brand new Blu-ray of Certain Fury looks and sounds better than it will ever look and sound from here on out. This is the definitive edition of this movie, but it’s a shame the movie is abominable.

Synopsis: During a shooting in court young prostitute Scarlet manages to flee. In a state of confusion, Tracy, who was arrested for a minor crime, follows her. When she decides to leave Scarlett, an accident makes it impossible. So they’re bound together on a flight from the police and some of the meanest criminals of New York.

Review: Some young women filter into a courthouse. They’re all accompanied by their exasperated lawyers. Each woman is about to face the judge for various crimes. One of the women starts singing obnoxiously, upsetting the order of the court. Everyone is distracted, the judge is annoyed, and one of the armed guards thinks it’s a joke. Suddenly, the singing woman has a knife and slashes the old cop in the throat and grabs his gun and blows another cop away. Chaos erupts as the murderer’s accomplice grabs the dead cop’s shotgun and blows the judge’s brains out. More cops arrive, random gunfire sprays innocent people right and left. In the pandemonium, two prisoners – Scarlet (Tatum O’Neal) and Tracy (Irene Cara) – escape, but suddenly the police think they were the one’s involved in the killings in the courthouse. They run for their lives and end up in the sewer, leaving a trail of carnage in their wake. A cop tails them to the sewer, and he almost has them, but he drowns in a wave of sewage. Scarlet and Tracy (who never met before) are forced to become allies as they keep running from the law, putting themselves at further risk from the media, which has tagged them as the culprits of the slaughter. Drug dealers and city scum are also out to get them as they become desperate and steal drugs to make a quick dollar on the streets. With no allies and only enemies, their certain fury comes to a boil when they run out of options.

I so wanted to like this movie. The premise is good and the first ten minutes are shocking and outstanding. Unfortunately, the movie swiftly degrades into poorly written and acted scenes that insist on making sure the audience won’t be able to stand the company of either of the protagonists, who bicker, curse, and make completely idiotic decisions that continue to show how stupid they are. The tone of the movie is mean and nasty. The bad guys are disgusting. The settings are gross and ridiculous. There’s a scene at a drug haven full of addicts shooting up and having sex. The place is a tinderbox, but there are lit candles everywhere. The movie is ugly as hell, and by the time it’s over you realize you hope both Scarlet and Tracy are thrown in jail for years and get some rehabilitation for their terrible, foolish, and moronic behavior.

Kino Lorber’s brand new Blu-ray of Certain Fury looks and sounds better than it will ever look and sound from here on out. This is the definitive edition of this movie, but it’s a shame the movie is abominable. It’s a New World Picture, so if you’re a fan of films made by New World and would like to add this one to your collection, now’s your chance. The slipcover is reversible with two nice pieces of original artwork. There’s also an audio commentary.