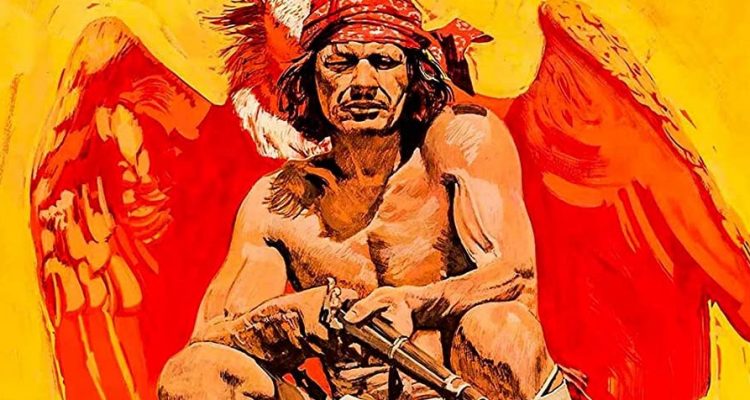 Kind of one-note and unimaginative, Chato’s Land might as well be a slasher set in the Old West, with a justified (but vindictive, and rightfully so) killer eliminating his hunters one by one.

Plot: After being wronged, a half-Indian man goes on a killing rampage of revenge.

Review: Half-breed Chato (Charles Bronson) is minding his own business at a saloon when a racist sheriff threatens him, and Chato doesn’t hesitate to shoot the sheriff dead in self-defense. A hanging party goes out to catch him, but he leads them on an odyssey of death, as he takes them through Apache country where he knows the lay of the land. The posse’s leader (played by Jack Palance) eventually gets the picture that their trek is useless, and when his team begins turning against itself with infighting, murder, and bad decisions, Chato ultimately wins.

Kind of one-note and unimaginative, Chato’s Land might as well be a slasher set in the Old West, with a justified (but vindictive, and rightfully so) killer eliminating his hunters one by one. The conclusion is pat and abrupt, and more or less unsatisfying. Bronson barely says a word in the movie, and he is unfortunately not on screen very often. Directed by Michael Winner, who made The Mechanic and the first three Death Wish movies with Bronson.

Kino Lorber has just released a special edition Blu-ray of Chato’s Land that reissues what Twilight Time released years ago, but without the isolated score track. Kino has added a new audio commentary by two film historians, and keeps the archival interview with the screenwriter, and the trailer. The picture quality is more than adequate, and it’s nice to have the film back in circulation.