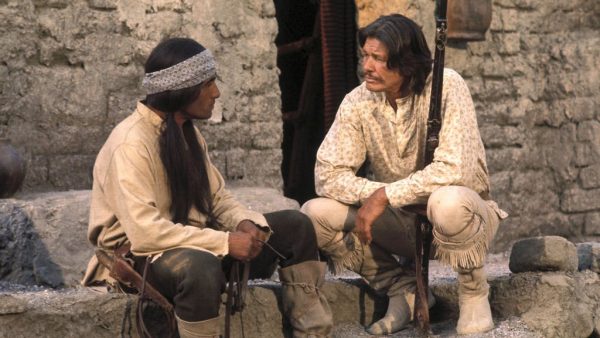 Chato’s Land is a Bronson classic and essential for every fan of his.

Plot: After Chato (Charles Bronson), a half-breed Apache Indian, kills a vicious sheriff in self-defense, a posse pursues him led by Quincey Whitmore (Jack Palance), but as the white volunteers advance deep in Indian territory they become more prey than hunters, leading to internal strife.

Review: Charles Bronson plays Chato and he is perfect for the role; he was in great physical condition at that time, in fact he was arguably at his peak. He had a great presence, which was needed because Chato only has a few words in the entire movie and speaks more with his physicality and his eyes.

After two minutes in the story is set and we jump right into it. Before the opening credits, Chato is on the run and the sheriff is dead. It sets the tone immediately. The Story, with the music, the actors and the big landscape shots together create a great, intense atmosphere. This is a very manly movie. There are only a few women in the movie and they are only there to push the story between the posse and Chato forward. The first half of the movie is basically about the chase and how Chato seems always one step ahead.

The second half is about revenge, after the posse did some horrible things to his family. Where the tension is slowly building in the first half, it erupts in the second. From there on, Mr. Bronson is at his Badass best. The movie itself is as much about revenge as about group psychology. All this hate, racism, the failure to catch Chato and the loss of some members gives way to group disintegration and leads to their ultimate downfall. Jack Palance plays the leader of the posse and a former Confederate soldier. What seems in the beginning, like one of his classical standard villain roles develops into much more as the story progresses. Quincey is basically a man in search of a purpose in his life (after the war). He is not a particularly strong leader like you would maybe expect. He has doubts, he is more reasonable than others, but he loses control over the group. He is kind of a tragic figure and Palance does a great job. The rest of the casting for the other members of the posse was spot on too; everyone has their own beliefs, struggles and motivations to catch Chato.

The movie is directed by Michael Winner and it was his first collaboration with Charles Bronson (they also did The Mechanic, the Stone Killer and the first three movies of the Death Wish series together). He did a good job, but his obvious obsession with rape sucks. The scene in Chato’s Land is not as disgusting as later ones (Death Wish II), but still it is not necessary and we could ave doe without it.

Overall, Chato’s Land is a Bronson classic and essential for every fan of his. It is a dark, gritty western, where there are no heroes and the white man is really the animal.