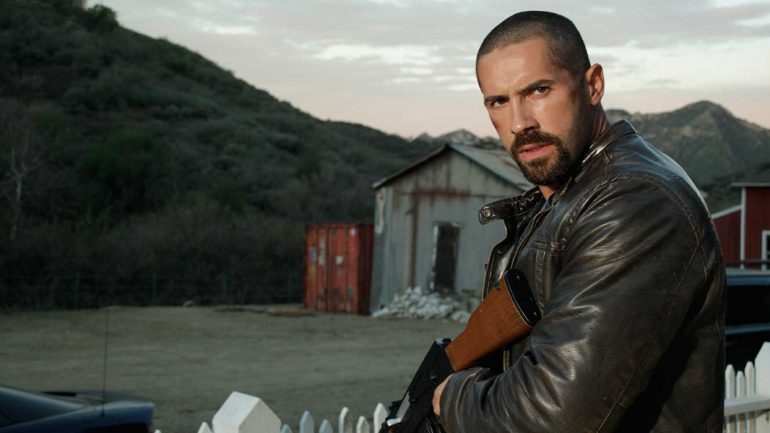 When the action is this good, it’s easy to take it for granted that no one else is even coming close to what Florentine and Adkins have been doing for the better part of a decade.

Plot: A rogue soldier turned outlaw is thrust into a relentless fight with a corrupt sheriff, his obedient deputies, and a dangerous drug cartel in order to protect his sister and her young daughter.

Review: The kicks and fisticuffs get started right away in director Isaac Florentine’s latest action film Close Range, starring underrated action star Scott Adkins from Florentine’s films Special Forces, The Shepherd: Border Patrol, Undisputed II, Undisputed III: Redemption, Ninja, and Ninja II: Shadow of a Tear. They’ve already shot their next film Boyka: Undisputed IV, so it’s more than obvious that these two guys are a match made in “B” movie heaven. It’s almost criminal that Adkins hasn’t been able to reach beyond his core, niche audience, and the same could be said of director Florentine, who has been making martial arts-infused action films since the early 1990’s when he directed the 21st Century (a splinter faction of Cannon Films) release Desert Kickboxer. That Florentine has kept at it for almost 30 years is a testament to his will and his fortitude to keep hard-pounding martial arts action alive in this downloadable age when these films have gone the way of VHS. Both Florentine and Adkins (a great team any way you look at it) are the hardest working guys in the business that still after all these years refuses to give them the respect they deserve.

In Close Range, Adkins plays a one-note ex-soldier named Colton MacReady, who is on the warpath to rescue his estranged niece from a drug cartel south of the Mexican border. All we need to know is that Colton is a dynamo with his fists and feet, and the fact that he has outstanding warrants for his arrest for past crimes is just a footnote to the simple outline that would describe his character. He breaks into a building full of hardened drug enforcers, kills a bunch of them in close quarters – close range – fights, and saves his niece, but somehow ends up with a key chain with a flash drive on it that will be the catalyst for the rest of the movie. When the cartel jefe realizes that some gringo killed his best men to rescue his niece (who is the stepdaughter of a loser who wronged him), it bothers him even more that the gringo made out with the precious flash drive that has all the secrets of his cartel. This won’t stand, so he throws a dozen more of the cartel’s toughest-of-the-tough at Colton, who is headed to the ranch where his niece lives to deliver her back to her mother. The rest of the film is essentially an extended standoff with neck breaking, arterial spraying, and flying fragments of glass and wood splinters, with a showdown that has a satisfying conclusion. The good guy (or is he a good guy? Doesn’t matter) wins, rides off on a dirt bike, and the credits roll.

If you’re going to compare the movie with anything, compare it to the Jean-Claude Van Damme-starring picture Nowhere to Run from 1993. Where that film has Van Damme starring in one of his most dimensional roles as an escaped convict, drifting through Middle America where he comes to the aide of a down-on-her-luck single mother and her two cute kids, Close Range never veers into character development of any sort, and there’s barely a moment for drama, let alone last names, but Close Range uses absolutely every resource that was made available on its very small budget (3 million, if reports are correct), and it delivers in spades on the action. Star

Adkins wasn’t given rich material to work with the way Nowhere to Run gave Van Damme room to stretch his acting muscles. That’s one of the big problems Adkins has against him: No one is giving him a chance to act while he’s doing these small action films. He growls, he grimaces, and for lack of a better term, he’s not showing any range in this film or in the last few he’s starred in, but it’s not his fault. As far as I’m concerned, he has every sharp tool in the shed to build himself a great career, and he can be one of the great ones if there’s a filmmaker out there willing to take a risk in allowing him to capitalize on his talents and abilities as both a fighter and an actor. Director Florentine has gone above and beyond in the action and martial arts departments (as usual, no complaints from me), but it might behoove him to simmer down the action to give his stars (namely, Adkins) a little breathing room in between the nonstop fights. It’s okay to breathe and have a conversation or two before the next showdown. Adkins certainly has it within himself to be more interesting and dimensional on screen than he is in Close Range. But when the action is this good, it’s easy to take it for granted that no one else is even coming close to what Florentine and Adkins have been doing for the better part of a decade.