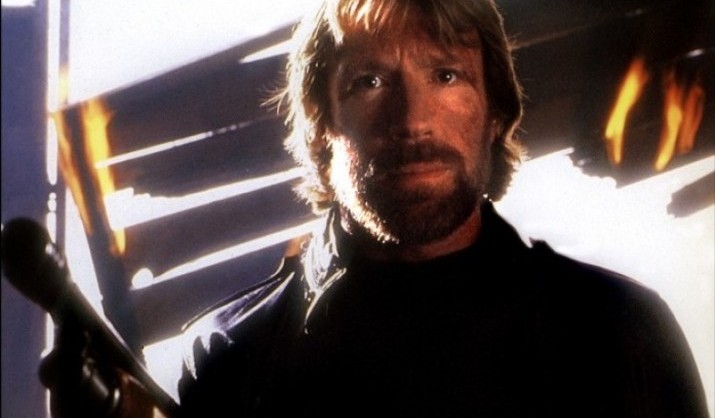 If you bought the previous Blu-ray from MGM, it’s time to retire it and grab this upgraded edition.

Synopsis: A Chicago cop is caught in a middle of a gang war while his own comrades shun him because he wants to take an irresponsible cop down.

Review: A drug bust is botched, and detective Eddie Cusack (Chuck Norris) is put to the test for being in charge of the operation. One of his subordinates (played by Ralph Foody, the black and white gangster from Home Alone) accidentally killed an innocent man during the drug bust, and he covered it up by planting false evidence, which puts the heat on Cusack’s unit. Cusack takes the high and moral road, while his entire unit turns against him, and when the drug lord they’re up against – Camacho (Henry Silva) – gets serious about getting revenge, Cusack finds that he has no one to back him up (not that he especially needs it). He commandeers a prototype robot cop to assist him when he decides to go up against Camacho and his men in a warehouse.

One of Norris’s best films, Code of Silence gives him plenty of room to be Chuck Norris while also giving everyone around him an opportunity to shine too. It was scripted by Michael Butler and Dennis Shryack, who also wrote the superior buddy action movie Fifty/Fifty with Peter Weller and Robert Hayes. They clearly know dialogue and the flavor of Chicago, as everyone speaks and acts like any real human would in that part of the U.S. The director, Andrew Davis, should be credited for making every nook and cranny as authentic as possible, and it’s no surprise that he would later become a big director in Hollywood. His next films were Above the Law, The Package, Under Siege, and The Fugitive. The best scene in the film (and there are several great ones) has Chuck faced against about twenty guys in bar. It’s a doozy. David Michael Frank did the score.

Kino Lober will be releasing Code of Silence on Blu-ray on December 12th. It comes with a bunch of cool special features, all of which are exclusive to this release. Andrew Davis provides an audio commentary, and there are four on-camera interviews with members of the crew, as well as the theatrical trailer. If you bought the previous Blu-ray from MGM, it’s time to retire it and grab this upgraded edition.