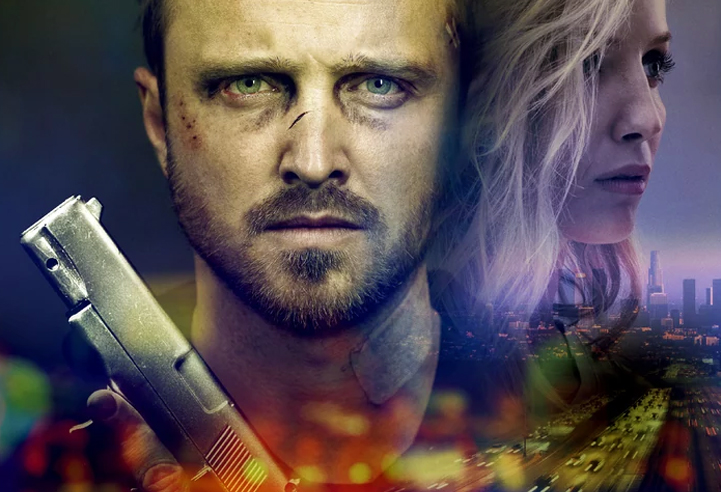 The film is well shot and played out, and the leads are good and marketable, so I don’t understand the way this movie was treated. The ending is a little unsatisfying, but some viewers might appreciate it. I really enjoyed this solid picture.

Plot: When his girlfriend goes missing, David must track down her whereabouts after he realizes she’s not who she was pretending to be.

Review: David (Aaron Paul) and Claire (Annabelle Wallis) meet cute. They quickly fall in love and move in together. Everything seems good until the day David wakes up one morning to find that Claire has disappeared. He roams the neighborhood, calling her name. After a day he files a missing person’s report. Was she abducted? Did she leave him? There simply aren’t any clues. A year goes by, and David starts packing everything he and Claire shared, including all of the photographs she took in her spare time. He studies them and finds that each one holds a small clue as to who she might have been. Then, after a violent encounter with one of her “friends,” he believes that she hid something in their backyard, and so he digs and digs, and he finds a roll of film. On that roll he discovers that she was spying on some people, and so taking matters into his own hands he tracks down the location near their home and gets himself into a pot of hot water as the place belongs to the Russian mob and he gets their attention. This leads him to several other dangerous situations where his life is on the line, and soon some government spooks are on his trail. He’s captured, tortured for information, and not understanding what he’s up against or what really happened to Claire, he fights back with pure ignorant fortitude and opens up a can of worms. Who are his enemies? Is Claire alive? Will David survive his quest for answers?

Quietly released to some theaters last year, the engaging mystery/thriller Come and Find Me is a surprisingly strong little film for Lionsgate to dump without any ado. Now that it’s on Blu-ray and DVD, audiences will get a chance to discover it, and it certainly deserves a big audience. The film is well shot and played out, and the leads are good and marketable, so I don’t understand the way this movie was treated. The ending is a little unsatisfying, but some viewers might appreciate it. I really enjoyed this solid picture. Zach Whedon directed.

Lionsgate’s new release Come and Find Me is currently available to own on Blu-ray and DVD. It comes with an audio commentary by the director, and a feature called “Unraveling the Mysteries of Come an Find Me.” It’s affordably priced to own, and it’s worth a pick up.