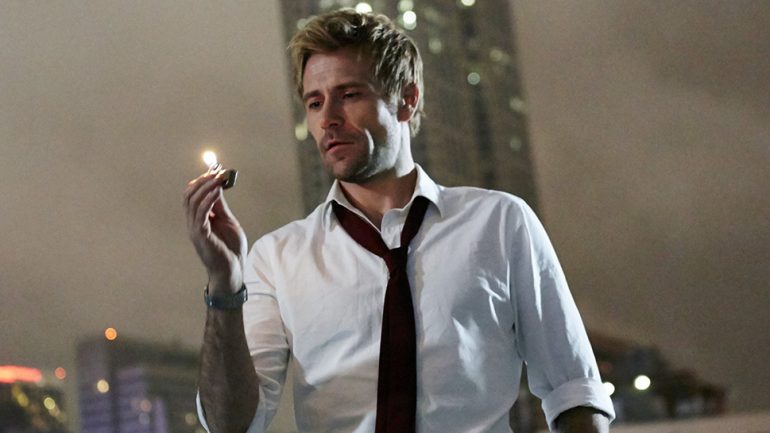 This is the perfect way to watch Constantine, but it’s too bad the show wasn’t a sure thing.

Summary: A man struggling with his faith is haunted by the sins of his past but is suddenly thrust into the role of defending humanity from the gathering forces of darkness.

Review: Remember when Keanu Reeves played the comic book character John Constantine in Constantine in 2005? The film had a lot of potential and might’ve gone on to spawn a franchise, but for whatever reason the film didn’t ignite a spark with audiences. About a decade later, the Vertigo / DC comics character (the name of the comic series is Hellblazer) was revived for network television in Constantine, which was cancelled after only a single season (13 episodes total), once again proving that this character just can’t reach its intended target demographic.

Constantine, this time is played by British actor Matt Ryan who has an attractive put upon look to him, haggard, but not too sleepy looking, clean, but somehow unwashed. He doesn’t appear to be too haunted for a guy supposed to be playing a cursed demon hunter, but that’s network TV for you. I mean look at those Winchester brothers on the long-running show Supernatural. Those dudes are pretty, but they keep slaying demons and ghosts, and even go to hell on occasion. Ryan’s Constantine has a series of adventures involving demonic possessions, vengeful angels, and the various ugly forms evil takes, and his companions are an angel named Manny (Harold Perrineau with contact lenses), a soothsayer named Zed (Angelica Celaya, poorly cast), and a guy named Chas (Charles Halford) who can’t die (technically, he can, but one of the episodes is all about that). This is a well-produced show with all the expensive trimmings (lots of good looking special effects, particularly), but it still never quite catches fire the way it should. The chemistry between the cast is never “just right,” and the quality of the scripts and plots for each episodes never quite rises above mediocrity, but there are occasional standout episodes or cool moments for Constantine to shine as a character. The gore and action quotient is fairly high from episode to episode, so fans of the genre (and probably the source material too) should appreciate the show.

My stance has always been that all the best shows get cancelled early on. Perhaps it’s a blessing that Constantine was axed before it had a chance to really suck, but in this case I wonder if it was cancelled too soon because it never got to spread its wings to soar. It certainly had enough time and money behind it to find its footing, and I don’t blame the network for shutting these doors when they did. It’s also very telling that Warner Brothers took their sweet time in delivering a DVD or Blu-ray release of this show. It was finally relegated to their Warner Archive home video division, which means that this show cannot be purchased in stores. You have to order it online (it’s an “on demand” pressing), and like me, I was excited to finally get my chance to watch the show in my own good time. The Blu-ray edition looks and sounds just as good as any other major Blu-ray release, with ultra crisp high definition picture and sound, and while there aren’t any special features on this release (and no slipcover, only a Blu-ray case with three discs), it does lend itself nicely to a fan’s library. This is the perfect way to watch Constantine, but it’s too bad the show wasn’t a sure thing.