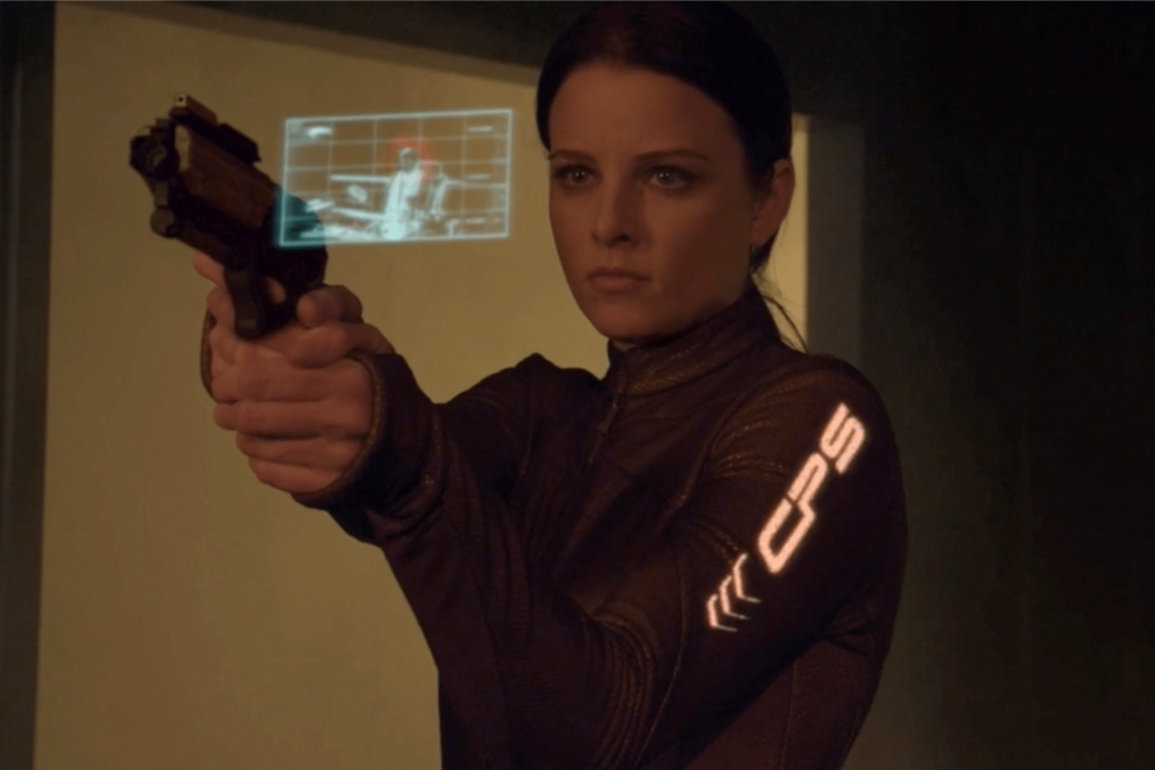 The best non-cliché time-travel action show in recent history that takes off immediately and never slows down.

Review: In spite of being many years early, the terrorist group decides to continue its violent campaign to stop corporations of the future from replacing governments, while the police officer endeavours to stop them without revealing to everyone that she and the terrorists are from the future. Season 1 and 2 deal with Kiera and Carlos having to trust each other while Alec finds out shocking secrets about his family. Much other political intrigue and questionable police ethics are also explored while Kiera questions if she can even get back to her timeline and if her son and husband will even exist when she gets back.

Season 3 surprises by covering the bases of the other plot twists introduced in Season 2. Here, Keira is forced to reevaluate how she views Alec after finally finding out that he’s a key part of how crap started to hit the fan and cause the whole time-travel paradox.

Season 4 is a shorter final season that has Kiera team up with time-traveler Brad Tonkin (Ryan Robbins, Falling Skies) to face off against the Future Soldiers, who arrived with a flash of light at the end of Season 3.

With a Timecop type premise, Blade Runner-ish future cops, 24-like addicting terrorist mysteries, Minority Report type future visions and containing many of the cast and future plot twists of other Canadian scifi shows like Stargate and The X-Files. Based on these comparisons, this series is already pumped up for an easy binge-watching spree. The dialogue won’t win awards and some time-travel may be too overfamiliar for the geeky crowd but the series is hardly trivial and not downright insulting at all. It often keeps it all focused on Kiera’s problem-solving, the terrorists betrayal of one another, Alec’s timeline altering and Carlos’ gray morals. When it’s not focused on the battle between the good and bad guys’ equally intriguing stories, it hints at a crooked conspiracy involving the both Vancouver political and police divisions who are hiding a bigger agenda.

Somehow, it never feels needlessly overdone, repetitive or overcomplicated, and that truly is a miracle that it doesn’t as most shows get too messy or feel the need to have filler episodes. Alec’s girlfriend and goofing up the timeline subplots during Season 2 did get occasionally irritating but it did serve a purpose and wasn’t the only thing featured in their respective episodes. The time-travel genre often feels the need to be pretentious and showcase endless future realities while injecting it with implausible plot twists and explosions for a cheap thrill ride. And here while there was insane plot reveals and gruesome action, it felt just as keen on the characters’ fates and undoing the deadly alternate future but without trying to be derivative and pretend to be smarter than the average bear. No sir, this was organized action with fascinating chaos and never felt unintentionally goofy or schlocky in any part of its execution.

In fact, I’d say it was pretty well-made in all areas. The dialogue while sometimes generic sounding wasn’t poorly delivered and was simple without seeming like lame exposition. The action scenes and CGI effects were both catchy because they move the story forward, felt needed and looked bigger than a typical lower TV budget actually allows. The veteran character actors earned their keep especially here; Rachel was dialed in as the heroine Kiera and Roger Cross should totally have his own movie after showing how his Travis character and his band of terrorists aren’t much different at times than some of the other authority figures who have broken the public’s trust far more times than they’ve caused destruction. And by showing the imperfect good and bad cops, it was hardly a formulaic crime show and actually more of a barrier to hinder Carlos and Kiera from breaking the rules to stop all the numerous antagonists from wreaking havoc.

Continuum was, like many Canadian shows, available to view on Netflix but now you will have to seek it out on other streaming platforms or physical media. Although streaming’s absolutely the best way to see it so you can skip thru the theme song and recaps, and you’ll have a season over and done within a day due to the commercial ad cut-to-blacks spaces being removed.