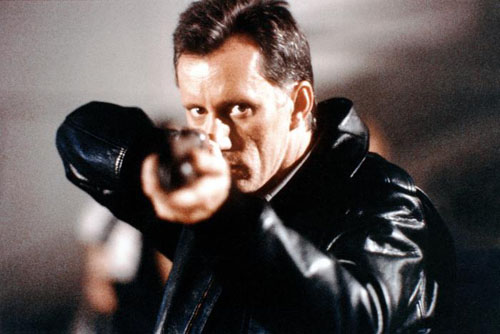 Cop on Blu-ray is a must-own for fans of the genre.

Synopsis: An obsessive, insubordinate homicide cop is convinced a serial killer is loose in the Hollywood area and disobeys orders in order to catch him.

Review: James Woods is in top form as Lloyd Hopkins, a seasoned and cynical Los Angeles police detective who stumbles onto a grisly slaying of a beautiful woman hung upside down and gutted in her own apartment in Hollywood. Some small clues lead him to believe that the murder is just the latest killing in a series of murders dating back several decades. Even when his captain tells him to cool it on his relentless pursuit to act on his instincts based on the thin-seeming shreds of evidence, he goes full bore into a one-man investigation (though he gets a little help from a fellow cop, played by Charles Durning). His leads suggest that the killer may or may not be into feminist literature, which takes him to a local feminist bookshop, and when he gets to know the owner (played by a spot-on Lesley Ann Warren) a little bit, he realizes that she’s been receiving anonymous secret admirer letters from the killer since she was in high school. This propels him into an animalistic rage as he gets closer than ever, and after another murder of a swinger he happened to have sex with a few nights previous, he also understands that the killer is on to him. After being suspended and losing his badge and gun, Hopkins says to hell with it all and goes into overdrive as he goads the killer into meeting him face to face. The final scene is stupendous.

I absolutely love Cop. James Woods has done some great work, but his performance here might be his finest hour. He worked incredibly well with writer/director James B. Harris (who did the film Fast Walking with Woods previously), and the script, which was based on a book called “Blood on the Moon” by James Ellroy, is razor sharp and nuanced and gives Woods plenty of room to flex his skills as an actor. The action is sparse but intense and explosive, and along with a select few other cop action films like Relentless, this picture is a gem.

The Blu-ray from Kino Lorber is a much-improved upgrade from the MGM disc, and an added bonus feature on the Lorber disc is that it has a feature length running audio commentary by writer/director Harris. The picture quality is filmic and grainy, but sharper than the DVD, and the sound is pretty fantastic as well. Cop on Blu-ray is a must-own for fans of the genre.