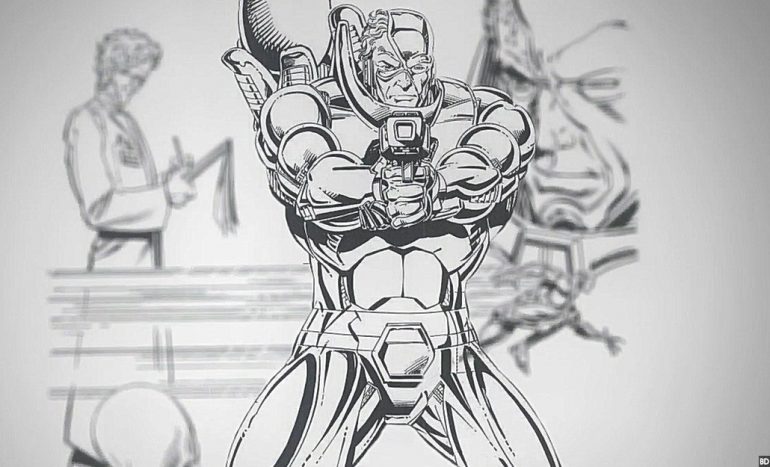 George Romero has been associated with a lot of unproduced scripts over the years. But probably most astonishing among them is his collaboration with Marvel comics which would have introduced a new character into the Marvel pantheon.

Back in the early 80’s, interested in moving on from horror titles, George Romero and producer Richard Rubinstein’s production company Laurel Entertainment had looked into acquiring the rights to comic book characters for theatrical films, but found those rights to be too expensive.  So, the next natural idea was to create their own comic character. Enter then Marvel Editor-in-Chief Jim Shooter who agreed to introduce a comic character simultaneously in movie theatres and Marvel comic books called Copperhead. Copperhead was conceived as a cyborg sheriff in the not-too-distant future of Philadelphia. Romero and Shooter wrote a treatment, and apparently a script for the project, claiming a “story by” credit each.

Shooter hired inker and writer Bob Layton (Iron Man) in 1984 to create 48 pages of concept art for the Copperhead project along with Marvel artist Jackson Guice (X-Factor). This art was also intended to be used for the eventual comic book adaptation.

The project was originally called Copperhead Conquers the Warhawks and later renamed Mongrel: The Legend of Copperhead. It would have told the story of how Copperhead got his powers, tested and used them and cycled through his first adventures. The film was to be very ambitious for its time and was perhaps Romero’s biggest, most expensive project ever. At a time when the industry was still reeling from the staggering success of the Star Wars films, Bob Layton said of the film that it was to be George Romero’s “Star Wars.”

Unfortunately, the decision was made to put Copperhead on hold after the release of Day of the Dead. Of course, Day of the Dead had its own troubles with financial backing. Unable to secure enough money to make his epic unrated version of Day of the Dead, Romero opted for the scaled down version that eventually hit theatres. The film was a commercial flop in theatres and raised doubts that Romero could secure the financial backing needed to mount the ambitious Copperhead project. Marvel put Copperhead plans on hold, where it remained ever since.

Were it made, Copperhead had the potential to propel Romero into the big leagues of blockbuster filmmaking. With the high budget necessary to realize the visuals in the film, and the very best technicians of the time combined with Romero’s filmmaking skills, the film could have been very special. Romero said of Copperhead in a New York Times article at the time “It will have some solid social values and a little social satire and there will be a lot of weaponry and vehicles.”

Copperhead would have preceded movies like Robocop and Terminator with its sci-fi themes. Another school of thought is that if Copperhead were made it probably would have fallen short of its ambition and become a cheese-ball 80’s sci-fi “cult classic”. Either way, it would have been awesome. It’s another interesting footnote on Marvel’s pre-Blade (i.e. pre-successful) theatrical film projects.

In 2005, Bob Layton posted pages from his and Guice’s work on the Copperhead project on his website. Dig the giant robot with the gun hands!