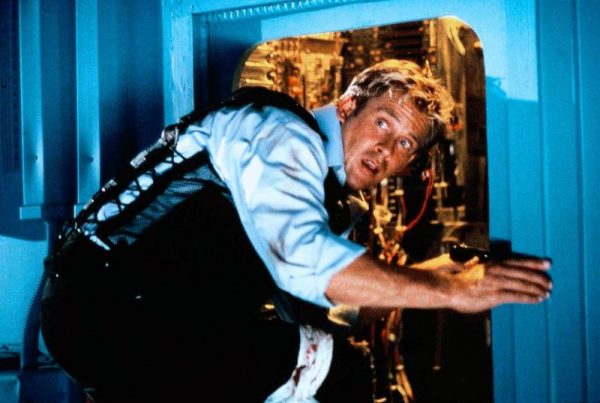 Crash Dive II is far more entertaining than Fugitive Mind. It’s not the best action movie in the world, or particularly memorable, but an entertaining b-action flick and it’s clear that the actors had fun in it.

Plot: US Navy medical officer Jake Fuller is detailed for a goodwill visit aboard a Russian submarine. But he and his companion, Lt. Swain, end up alone among terrorists, who have taken over the submarine and threaten to fire its nuclear weapons to recreate the Soviet Union by starting a new world war

Review: After Fugitive Mind this is my second Olen Ray / Dudikoff movie review. They have made four movies together (The Shooter (97), Crash Dive II (98), Fugitive Mind (99) and Stranded (2002)) and I plan on reviewing all of them. So Crash Dive II a.k.a Counter Measures is the second movie out of the Quadrilogy of these B-Movie Legends and it is better than Fugitive Mind!

It’s interesting that it has no connection to Crash Dive I, but a very similar story: the crew of a nuclear submarine rescues supposed victims of a boat disaster, but the victims turn out to be terrorists intent on capturing nuclear weapons aboard the sub.

Sound familiar?! So obviously they named it Crash Dive II for marketing reasons. This is kind of a remake, only one year later and Dudikoff has a different character name. Both characters are former Navy Seals but in this movie, he is turned into a medical officer after his brother died in one of their missions. So first action cliche check: traumatized, reluctant Hero! By the way, the opening sequence, with the death of his brother, is an entertaining but extremely stupid shootout (so not exactly a stealth mission).

You can immediately tell that the budget was not the biggest, because the submarine doesn’t look really like a sub, more like an old spaceship (from the interiors). The first Crash Dive movie had a better sub look. The submarine sequences consist of stock footage, but it is integrated well enough to not drag you completely out of the whole movie. The action sequences are not highly innovative or spectacular but solid and they squeezed every dime out of the budget. Some nudity is always a definitive plus and it is delivered here.

With a B-Movie like this, you expect some flaws in the story. The leader of the terrorists needs Dudikoff and Lt.Swain to take care of one sick person?! So instead of killing one and minimizing the threat both are still alive which makes absolutely no sense. Strange… not very smart terrorists.

The subplot about the female terrorist (Lada Boder, also in Stranded) and the ambassador was kind of unnecessary. Dudikoff does a solid job as always and has a fistfight every 5 to 10 minutes. That is the right way to do a Die Hard in a submarine clone! The villain is also played very solidly by James Horan.

Henchman Alex Veadov later rose to fame as a Russian mobster in many movies like We Own the Night and The Equalizer. Alexander Keith (or Wendy Schumacher of softcore fame) as Lt. Swain is somewhat the comic relief. (Crash Dive I in comparison had Catherine Bell as the leading lady!) Fred Olen Ray Regular, Hannes Jänicke has a part and we also see him again in Stranded.

Also interesting that in Crash Dive I Reiner Schöne, of Mortal Kombat 2 fame played the villain. To see Olek Takarov (UFC Fighter, Movies: 15 Minutes and Predators) in a small role was a surprise and he has a fight with Dudikoff. Hell yeah, that is a good use of talent and it’s a nice, short fight but it delivers the goods. The facial expressions of Takarov are hilarious and entertaining too. With Fugitive Mind there wasn’t enough craziness but this movie is really a step further. There is some really bad (but unintentionally and very funny acting) by Alexander Keith.

In true action movie fashion the bad guys can’t even shoot somebody who is only five feet away. The main actress is not much better; she is a navy intelligence officer but can’t take cover when she needs to. Something I really saw for the first time in this movie is the use of a corkscrew to remove a bullet. Hell of a scene (the corkscrew is very prominent in the movie, like a mascot)! As a Croatian patriot, the mentioning of Dubrovnik, Croatia is a definitive plus for me, even when it is not really shot there.

Overall, Crash Dive II is way more entertaining than Fugitive Mind. It’s not the best action movie in the world, or particularly memorable, but an entertaining b-action flick and it’s clear that the actors had fun in it.