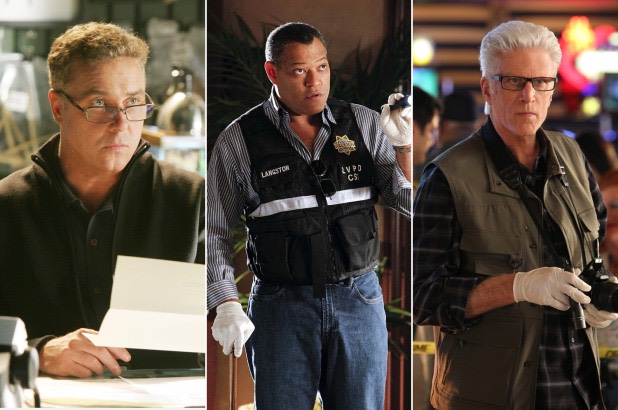 The show that kickstarted the stylish editing and morbidly fascinating crime reconstruction tech is still a fun joyride with occasionally flawed clichés in every other season/era.

The first season starts off with Dr. Grissom (William Petersen, Manhunter) and his various colleagues who in NYPD Blue/Profiler-style have all this examining expertise, testosterone-fueled manhunts, friendly flirtations, witty observations and love/hate friendship in their state-of-the-art forensics office. Seasons 2 thru 5 implement a whole different change in style by having more will-they-or-won’t-they flirting between the various cast while they explore the dark side of humanity, all in Las Vegas. Every type of crime is explored from dead strippers to mad bombers to scheming gamblers to pedophiles and rapists.

After seeing the beloved Grissom make a lengthy exit from the lab, we are introduced to Dr. Langston (Laurence Fishburne, The Matrix). A few more new supporting crewmembers are briefly introduced and both Langston and Caot. Brass occasionally find themselves having to step outside the confines of the law due to very hard-to-prove yet rampant killers harassing the team. There is also a three-parter crossover with Miami and New York shows involving Langston asking in both state divisions’ assistance in solving some kidnapped girls being taken by trafficking smugglers.

The overall show often works best when you get the stylish crime solving montages laden with electronic music, Have a final verdict monologue, have a whacky pun at the crime scenes, they get a cool kidnapping of one of the various characters every other season and/or when they get a twisted serial killer case. It makes up for its unrealistic antics (as rarely are the forensics guys also the supercops who arrest) by continually being consistent with such comic book logic and still having cool chemistry between its huge cast. This is easy to see how this show both changed the ever-evolving crime TV formula while also in a way inspiring other derivative, lesser quality shows.

At the end of the day this is the best example of how to do a style over substance show with rapid energy and fun adventure thanks to Jerry Bruckheimer hiring creator/Vegas native Anthony E. Zuiker to run free with such different approach. Head writers Carol Mendelsohn (Tour of Duty), Naren Shankar (Star Trek: TNG) and Ann Donahue (Murder One), among others, all supplied an organized formula that while not always surprising was a better way to approach the tired cop formula: show a bizarre murder, show the various tools used to solve the crime in flashy yet morbidly fascinating ways and then have have the rest of the episode involve a recurring subplot with one or more characters.

When it wasn’t using that format, it often regulated itself to two-parters or a multi-episode arc involving a season long serial killer terrorizing the heroes. It was all the better for having the crime lab be the heart of the show and while many critics wanted to create a rivalry between this show and other Law & Order type franchises, there was honestly no need for any comparison as it was a different style and focus for the MTV generation. I remember various teens, young adults and elders all digging thus format while everyone had their own nitpicks. Nevertheless, while I was late to the party, I got into this show during college in 2012 and found it to be its own relevant puzzle piece that brought different material to the table while otherwise just trying to be slightly above-average popcorn entertainment.

I would say that like other long-running shows that made inevitable cast changes, it definitely fell into that same hole of despair where fanboys just want to argue about who was the best lead doctor on the show despite the other cast staying on-board. When it wasn’t having those issues, the show itself was definitely being overshadowed, let alone in competition, with its spin-off shows Miami and New York. Both spin-offs both created their own identity while also, much like the Star Trek shows, sometimes were the version better known to some viewers which is why when you bring up this show with some peers, they either remember the premise, the Grissom character, the sexy supporting people, the crime lab tech, the New York show’s scenery, the various The Who featured theme songs or just David Caruso putting on his glasses while he makes a pun-tastic punchline.

Everyone has their favorite of the three entries but I would still say that this first one was the best of them all due to always being engaging in most areas. If I didn’t like how certain episodes ended, it was still rather fun getting to the finish line; if there was a weak episode, it was still engaging to look at let alone endure without feeling dull; if something felt too unrealistic, it felt like it still fit the over-the-top tone it overall had unlike other shows which fell victim to ego-headed producers or no organized writing. This show definitely was on a little too long but at least most of the cast got good farewell exits or made surprise returns later on.

There was also that many subplots that ended up being random or unfinished which is something the New York spin-off fell victim to. And while the Miami show was good with escapism, this original show arguably contained everything better and gave more equal time to each individual as a whole. Overall for the seasonal arcs or crossovers that didn’t have good execution still feel rather tame compared to most TV franchise mishaps. And since the style was the main star, this show overall benefitted from the crime scenes being better detailed, which was really good especially if the main storyline wasn’t as interesting that week. So long story short, this arguably had more hits and misses but went on a little long at 15 seasons- but never enough to where it shat on the bigger accomplishments it had achieved earlier. Whether you were a long-time viewer or casual one, the show benefitted from the way it got the average person’s attention while creating its own world. And while the cast was rather beautiful, they weren’t shabby in the dramatic acting department and most of them all had enough to do instead of an uneven divided narrative.

If there’s anything I would’ve changed about this show, I would’ve kept Grissom on as the lead and shorted this show run from 15 seasons to just 10 years and still used some of the same featured serial killer villains and frightening mind-games while wrapping it up quicker. I know some viewers didn’t care for Fishburne and Danson’s characters but I think they would’ve been better as just supporting cast as they did have huge shoes to fill being the new lead roles. Overall, it is a fun ride altogether if not always a successfully flawless thrill-ride.