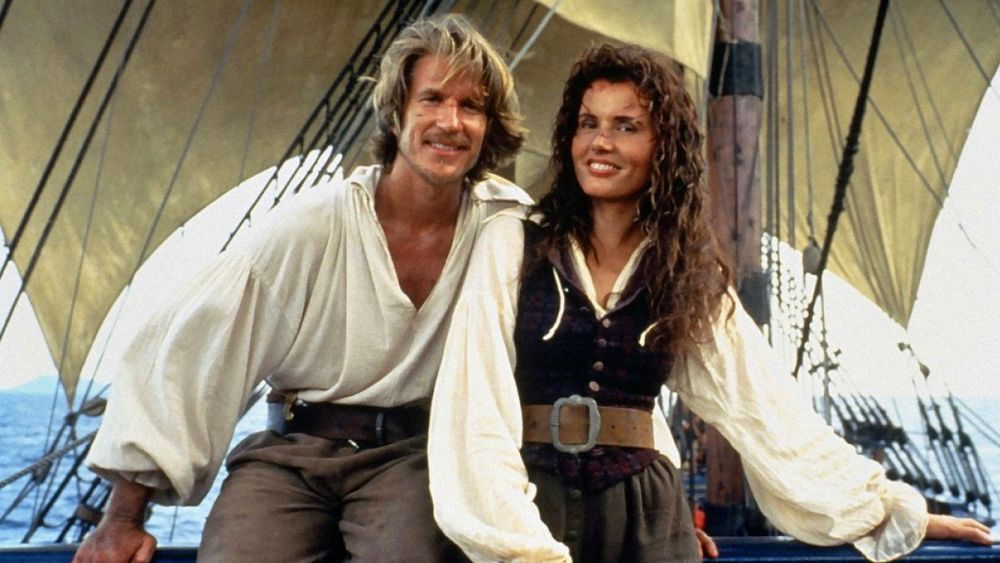 This is an outstanding release, worthy of a purchase, and at only 1500 units, it’s extremely limited, so pick your up before it’s gone for good.

Review: One of the biggest financial fiascos in cinema history, Cutthroat Island also happens to be perhaps one of the greatest and most exhilarating pirate movies ever made, far outshining the future Pirates of the Caribbean movies with Johnny Depp. The story is textbook pirate stuff: Pirate captain Black Harry (Harris Yulin) is murdered by his brother Dawg (Frank Langella) for his third of a treasure map, and Harry’s daughter Morgan (Geena Davis) recovers the map (it was tattooed on his scalp), sending her father’s crew across the ocean to find her other uncle, who is in possession of the other third of the map. Dawg pursues her in his ship, but along the way, Morgan picks up a rapscallion slave named Shaw (a charming Matthew Modine), who supposedly can read Latin, which everyone thinks the map is written in (it’s not; it’s just written upside down). When Morgan has two parts of the map, Dawg and the British Empire are on their trail to beat her crew to the uncharted Cutthroat Island where a massive wealth of booty lies hidden in a cave.

Lavishly produced and inimitable in its rollicking action and sense of scope, director Renny Harlin and production company Carolco (which went bankrupt because of this) gave audiences something they clearly weren’t ready or willing to watch: a splendid adventure worthy to be called great. Underrated in every sense of the term (I don’t care what anyone else has to say about it, frankly), Cutthroat Island has my vote as the best pirate movie to be produced in the latter half of the twentieth century. Everything on screen looks like it cost untold millions to produce (and obliterate), and it’s the most fun I’ve ever had watching a pirate swashbuckler. I saw it Christmas of ’95 in a theater and have never stopped loving it.

… but this isn’t just a movie review: This is also a review of the recently released two disc set from La La Land Records. Composer John Debney (who would go on to compose scores for The Passion of the Christ and Iron Man 2) delivered what might very well be the crowning achievement of his career with his score to Cutthroat Island. Reminiscent of the classics (think Korngold meets Williams), it has a rousing, robust sound, with instantly recognizable themes, and the budget for the score (like the film) allowed for a no-expense spared tapestry of the finest music money can buy. La La Land Records’ release (it was previously released twice under different labels, but this is the most definitive edition yet) contains over 146 minutes of music and has an informative sleeve, with liner notes that explain the history and troubles of the production (some of the info even I didn’t know). Honestly, this is an outstanding release, worthy of a purchase, and at only 1500 units, it’s extremely limited, so pick your up before it’s gone for good.