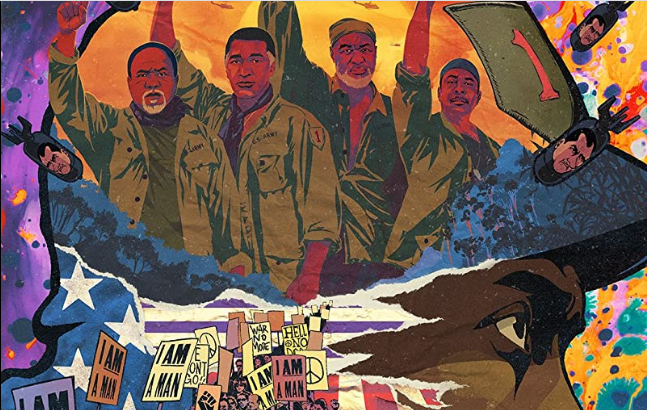 Another near recent entry by Spike Lee filled with more edgy imagery, organized rants, unexpected twists and greed-based themes in one thrilling yet fancy package!

Review: Spike Lee, having found another great hit with the recent history-crime thriller BlackKklansman, hits even harder this go-around and this film is not only, like others have stated, a neat combo of The Treasure of the Sierra Madre and Platoon but also a greatest hits in terms of all the signature Spike Lee moments you know and love. Everything from what kind of douchebags we’re detailing based on how they’re dressed and speaking to even the trademark Spike having-the-protagonist-talk-to-the-viewer moments. Delroy Lindo and Isiah Whitlock Jr. are no strangers to appearing in some of Spike’s earlier works but these aren’t just some of their better characters in his films but also just career best roles (let alone for everyone else involved).

It might be cliche to say that everyone played against type but it just speaks to not only their range but how well-versed the film was at handling all of these elements, themes and characters- all without feeling monotone, pointless or disorganized in scope. We’ve seen greedy soldiers, people returning to ‘Nam for various reasons and other war crimes on-screen before so why is this new you ask? Because of the handler (i.e. Spike), the way the story is told and new easter eggs that the filmmaker has on-screen this go-around. And believe it or not, that is more than enough to merit and this isn’t just one of the best War pictures of the end of the 2010s but also an altogether great racial drama and kick-ass adventure blended altogether.

Spike, like Oliver Stone, has had his hits-and-misses but always been beyond respectable because of the ballsy way he handles such controversial material while blending it in with attention-getting loaded questions, relevant subject matter and other creative ways to charge one’s anger yet successfully get them to listen. So many other filmmakers have tried to imitate Spike only to absolutely fail because you can’t replicate or tell a story the way he can. This film will anger you, excite you, devastate you and blow you away much like some of the characters in this film does. And while I wasn’t as impacted as I was by BlackKklansman, Crooklyn, He Got Game or Inside Man, it’s still easily one of Spike’s best pictures to date and shows how he’ll always have perfect surprises in store for audiences of various kinds. The only way anyone will dislike this film is if they’re not familiar with Spike’s bag of tricks, expecting just typical genre expectations or just flat-out suck at paying attention to anything in general.

The only sad fact is that this went straight to Netflix streaming as it would’ve merited being seen on a big screen opening night (which also says alot when the past dozen or so Netflix films have caused such a stink that there was a reason they barely played in theaters). Overall, it’s at the tips of your remote control so don’t hesitate to dim the lights and let your jaw drop at the chaos that gets unleashed in this edgy picture!