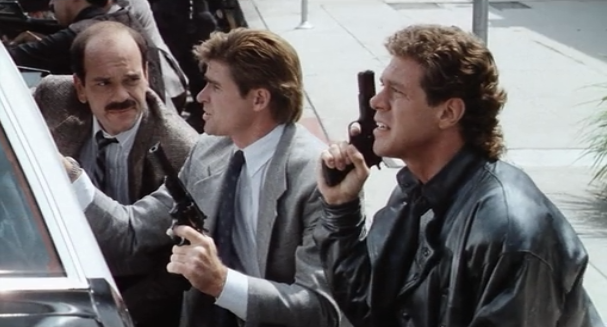 Dead Heat is the ultimate guilty pleasure with a very dark humour; the f/x are very good; it has many flaws but I was having too much of a blast to notice any.

Plot: Violent criminals who can’t be killed are shooting up Los Angeles, and the investigation leads LAPD detectives Roger Mortis (Treat Williams) and Doug Bigelow (Joe Piscopo) to a mysterious pharmaceutical firm. But when Mortis is suddenly murdered, his coroner girlfriend and loose cannon partner discover the company’s “resurrection machine” that turns Roger into the walking dead. Now the department’s most unstoppable cops must battle zombie hit men, a butcher shop gone berserk and the deceased industrialist (the legendary Vincent Price in one of his final film roles) who may hold the key to it all. But can Mortis solve his own homicide case before he completely decomposes?

Review: First of all I gotta say that I was lucky enough to see the most complete version of this film all because of a fanedit; you are not gonna find that version on retail. If you wanna check that particular fanedit that combines the Anchor Bay DVD with the Norwegian VHS visit the IFDb (Internet Fanedit Database) site. Kudos to Tranzor for making this edit.

This is an awesome SBIG (So Bad it’s Good) movie; it’s a buddie cop movie with a Re-Animator twist and it’s freaking hilarious. A movie that has a liver attacking Treat Williams is definitely a winner in my book. The dialog is also another A+ in this movie. You’ve got quotes like:

“Sorry to interrupt your erection.”

“You remember when we were in training? They always told us, “You can’t be a good cop if you’re a dead cop.” Here’s your chance to prove them wrong. You’re good and you’re dead.”

Amazing stuff really. And then we have the acting, it’s delightfully bad. In a movie where Treat Williams looks like he’s a great actor you know something is really wrong. Even Vincent Price in this one looks like he wishes that he was dead already instead of being in that movie.

The f/x are actually good and gory, and that also helps to swallow this movie down.

So SBiG movie? Check. Dark humour? Check. Violent and gory? Check and check. Don’t know about you guys, but this is just my kind of movie.