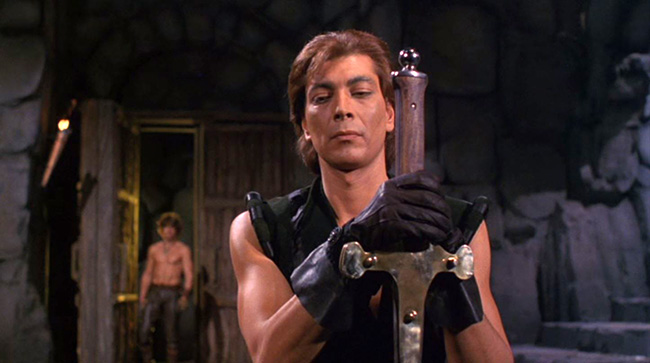 This is a hilarious romp with plenty of nudity and action. Could use more nudity though…

Review: What’s that you say? You’ve never heard of Deathstalker, much less Deathstalker II? Well lemme tell ya, neither had I until this weekend. In the early 80’s, with the surge of sword & sorcery flicks, producer Roger Corman threw in his 2 cents and the world was treated to the original Deathstalker in 1983. It was a fair box office success and from that came one of the greatest B movies of all time!

I will be honest. I purchased a used VHS copy of Deathstalker II at a thrift store completely on a whim.I love Return of Swamp Thing, which is another B flick that was directed to cheesy perfection by Jim Wynorski in 1989. I have also been a fan of Monique Gabrielle since I was a young kid. She is one of those faces (and bodies) from the 80’s that would show up in some of the worst/best movies and demand my attention, including the aforementioned Return of Swamp Thing. When I saw the purposefully awful cover on the box and quickly recognized Monique and Jim’s names on the credits I couldn’t resist. I knew it was going to be hilariously bad, but boy… was I in for a treat.

I will spare you the plot. One, because it’s not really important and two, because it’s a B movie so there really isn’t one.  What there is is amazingly witty dialogue, hilariously over the top sound effects and music score, incredible cheesy fight scene after fight scene and of course T & A galore! The film does everything that a B movie is known for to perfection and the best part is that it knows that it is doing it and isn’t ashamed of it one bit!

As I mentioned, I had never heard of, much less seen any of the Deathstalker series. Which it turns out there is a total of four. Needless to say, even after doing my Internet research and coming to the conclusion that I purchased the best of franchise, I still could not resist going onto Amazon and adding the other three to the collection. I hope to be watching them very soon and without a doubt I will be watching the series in order and throwing back in Deathstalker II for an encore performance!