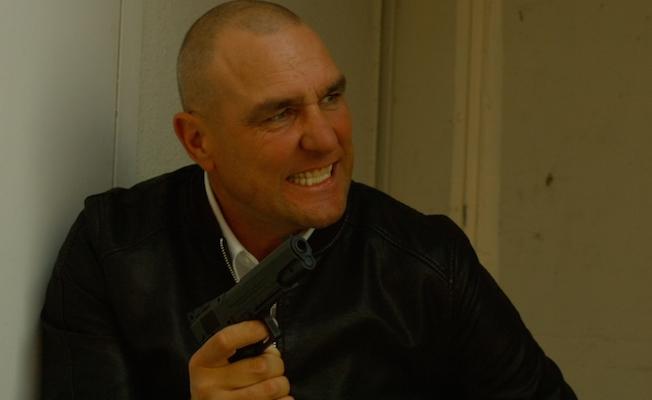 Woodward’s efforts here seem to be done on autopilot, which is disappointing because I saw what he could do with his western Traded. Unsophisticated and bored action fans willing to pay $10-$13 for a DVD of Decommissioned and 80 minutes of their time might want to check this one out at their local Wal-Mart. Others need not apply.

Synopsis: A retired agent’s life is turned upside down when he discovers he’s the patsy for an impending CIA planned presidential assassination.

Review: You’ve got to hand it to director Timothy Woodward Jr., who has had something like three (maybe four?) releases in 2016 alone. His cyborg action movie Weaponized was dreadful, but he really rebounded with the really engaging western with Michael Pare Traded that gave me a new confidence in him as a filmmaker. That was an accomplished piece of work, with rich characters, nice pacing, great acting from Pare and other members of the cast (even Tim Sizemore), and I consider that movie to be one of the nice surprises of the year. He’s back with the by-the-numbers actioner Decommissioned which features an action-ready looking Vinnie Jones on the DVD cover artwork, which (no fault of Woodward’s) is an outright lie, meant to lure paying customers in because they might recognize Vinnie’s face more than the actual star of the movie Johnny Messner. Messner, who had a shot at the big leagues with his starring roles in Anaconda 2 and Tears of the Sun (amongst others), has been making his bread with sometimes very cheap and scuzzy action movies that go directly to video, namely with his frequent director Woodward, whose previous two films with him included Weaponized and the absolutely awful 4Got10, co-starring Dolph Lundgren. This time Messner looks like he’s completely hulked out and bloated, but he’s not the problem with the film. Decommissioned (with its 80-minute run time) is on speed dial with its truncated story: a former agent of the CIA named Niles (Messner) is trying to live a regular life until the day government spooks break into his home, kidnap his wife (played by another former A-lister Estella Warren) and son, and torture him into accepting a suicide mission. They want him to assassinate the president (played by Robert Burgi who has two or three quick scenes where he’s talking to the press, meaning he’s on a set talking to a camera), but Niles is no pushover. He kills his torturers, escapes, and goes hunting for the spooks that have his family. Also on his trail is a determined detective (played by Michael Pare) who realizes the trail of bodies Niles is leaving is somehow connected to the CIA. And Vinnie Jones? He’s in there too (in a rare good guy role!) as Niles’ old boss. He has a few quick scenes, but nothing to warrant his face on the cover of the DVD.

Lionsgate recently quietly released Decommissioned onto DVD (not Blu-ray, sorry), and the film itself is pretty cheap, with ugly sets, murky camera work and quickly staged fight scenes (and plenty of them). Messner is sort of in line with the kind of work Luke Goss is doing these days. They’re “almost-but-not-quite” action stars, but they’re doing the kinds of thing guys like Steven Seagal, Dolph Lundgren, and Don “The Dragon” Wilson have made a living at. Messner doesn’t really have much to offer but his buff everyman quality. He’s boring, but he fits the part. Woodward’s efforts here seem to be done on autopilot, which is disappointing because I saw what he could do with his western Traded. Unsophisticated and bored action fans willing to pay $10-$13 for a DVD of Decommissioned and 80 minutes of their time might want to check this one out at their local Wal-Mart. Others need not apply.