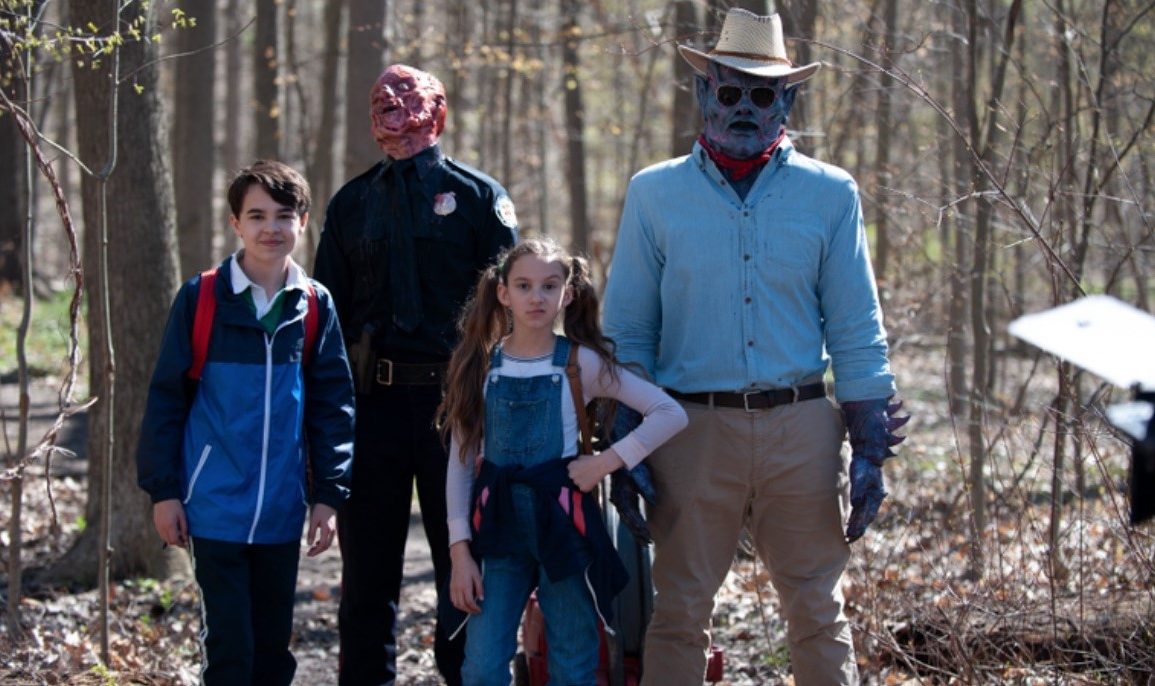 Effects artist turned filmmaker Steven Kostanski has always had an imagination filled to the brim with outlandish creatures and big ideas. Getting his first real exposure with the comedy filmmaking collective known as “Astron-6” making bizarre and surreal short films that allowed him to use all his tools while establishing his creative voice. Steven then moved into feature directing when he flew solo behind the camera for an ambitious low-budget Astron-6 project, the cyberpunk dystopian homage/parody MANBORG. While finding critical success there, Kostanski continued to work as a special effects make-up artist on bigger productions that had a need for his unique sensibilities; like the television show HANNIBAL as well as major Hollywood films such as SUICIDE SQUAD and CRIMSON PEAK.

In 2016, he returned to directing with the chilling and brutal ode to cosmic horror, THE VOID. While it lacked all the cheeky humor of Kostanski’s earlier Astron-6 work. It more than made up for it with a large amount of nightmarish practical effects creations that could only have come from his unique imagination.

As I stated earlier though, Steven Kostanski is a creator with no shortage of ideas and now he’s back again with a new feature film that melds the volume and insanity of his creature effects work on THE VOID with the bizarre humor of his earlier Astron-6 projects, the aptly named PG: PSYCHO GOREMAN. Here is the film’s official synopsis:

Siblings Mimi (Nita-Josee Hanna) and Luke (Owen Myre) unwittingly resurrect an ancient alien overlord who was entombed on Earth millions of years ago after a failed attempt to destroy the universe. They nickname the evil creature Psycho Goreman (or “PG” for short) and use the magical amulet they discovered to force him to obey their childish whims. It isn’t long before PG’s reappearance draws the attention of intergalactic friends and foes alike from across the cosmos and a rogues’ gallery of alien combatants converges in small-town suburbia to battle for the fate of the galaxy.

PG: PSYCHO GOREMAN is a film that pivots continuously between being absurdly violent and strangely heartfelt throughout its runtime but is always consistently hilarious. It’s a brilliant piece of subversive entertainment and the first great action comedy of the year.

I recently had the opportunity to have a brief phone conversation with Steven Kostanski where we talked all about the origins and influences of his latest film.

You have stated previously that PG: PSYCHO GOREMAN is the movie that most represents you as a filmmaker. Tell me more about that thought.

The whole point of the movie is I wanted to encapsulate my experience as a kid, watching movies that were not suitable for kids. I think it’s an experience a lot of kids growing up had where their parents would maybe rent them a video that they thought was kid-friendly and it wasn’t. For me specifically, my parents rented THE TERMINATOR. I have vivid memories of watching it and being kind of freaked out by it. Another examples of that for me is ALIEN. GUYVER 2: DARK HERO is another big one.

I wanted to make a movie that was like a kid’s movie for adults to try and capture that vibe of feeling like you’re getting away with something by just watching a movie. My hope is that some kid will watch PG: PSYCHO GOREMAN and be maybe a little freaked out by the violence, but also inspired by just how crazy and fantastic it is. I feel like as a filmmaker, I love the juxtaposition of absurd comedy with dark consequences. Straddling that line is a thing that I really enjoy doing. I do it a lot in this movie, juxtaposing fantasy scenarios and characters with brutal reality as a way of generating humor. So yeah, I feel like that’s something I like to do in my movies and that is entirely what “PG” is all about. 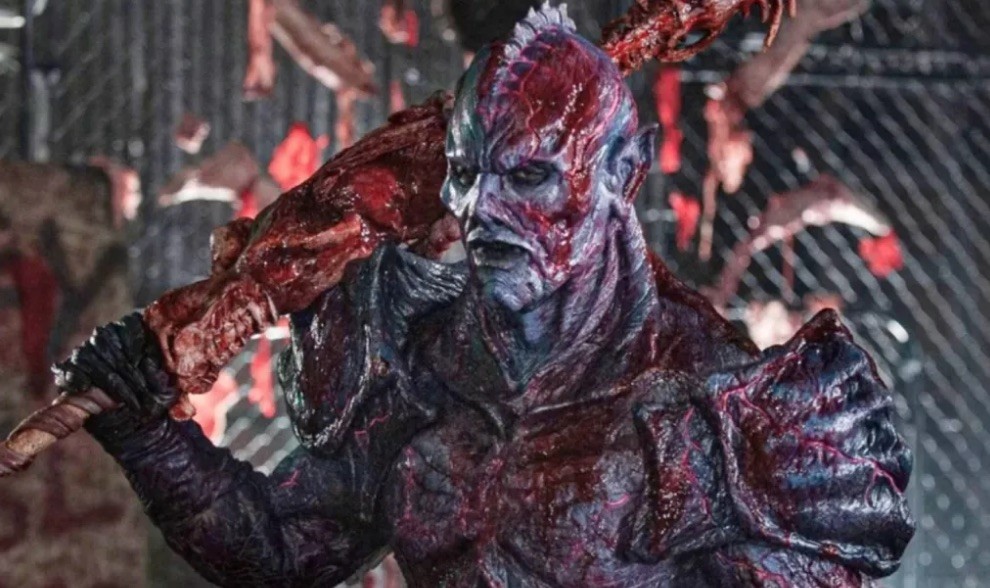 You mentioned THE GUYVER series, specifically GUYVER 2: DARK HERO. I noticed the references to it in PG: PSYCHO GOREMAN right away.

I am a huge Steve Wang fan. He was the director on GUYVER 2 and I think it’s just a more polished movie than the first, not to diminish Screaming Mad George’s work on the first film, which is fantastic. I mean the first GUYVER inspires me a lot, but more specifically GUYVER 2 is the movie that I remember watching as a kid. I think the action is better executed in part 2, as well. I think with the first movie, it might just be a case of them trying to keep it silly and kind of in a “Ninja turtles” vibe. Whereas the second one, I think leans more into SUPER SENTAI/KAMEN RIDER vibe, but with R rated consequences to the action. So yeah, I love Steve Wang’s work as an effects artist. His sculpting is fantastic. His paint work is amazing. The design of the evil “Guyver Zoanoid” at the end of GUYVER 2 is one of my favorite creatures of all time. It’s just everything I love in one creature design. GUYVER 2 was very much a big inspiration for the film.

I love Steve Wang’s work as well. It’s a shame that he only directed one other feature film before returning to just doing television and effects work. Anyway, moving on, tell me about casting the roles of Mimi and her brother, Owen. Those characters are the heart of the film and the performances of the actors are hilarious and wonderful. It must have been so challenging to cast children who could nail what’s there in the script because it’s such a delicate tone.

That was the big concern when I wrote the script and was talking about it with producers. Everybody was like “Yeah, this is great and we can see this working, but it hinges entirely on the kids” because if the kids can’t sell what’s happening on screen, we don’t have a movie. It doesn’t matter how good the creature effects are. And so, yeah, we just set out on doing a really extensive casting process. We cast a really wide net and were taking audition tapes from all over Canada and some of the States as well. Nita actually was in, I believe the first rounds of tapes that came through and I just kept getting her to audition again and again, because in that first tape, she just had a level of professionalism that I was really impressed by. That was a big factor to me.

Having worked on sets a lot, I know what the environment is like, and watching some of these kids in their tapes and also doing some in-person auditions. You could just tell that them being in a room with people they weren’t familiar would cause them to freeze up. Whereas Nita, I could just tell that she had experience, she was experienced being in front of a crowd and that aspect did not phase her.

So, that to me was a huge component with this. Same with Owen as well, he was just such a professional about everything and both of them just brought a level of professionalism to the movie that, I mean, if we didn’t have that we would not have made it through our shooting days. They were always on the ball and on top of things and really delivered and had the stamina for this type of movie as well. It’s a very physical movie with lots of chaotic things going on. And they were never overwhelmed by it. They were always game for whatever we threw at them. They were even doing their own little stunts at times. They were just right into it. It was the perfect scenario because you could tell that they were having fun, but also were taking the job seriously. It was really great. 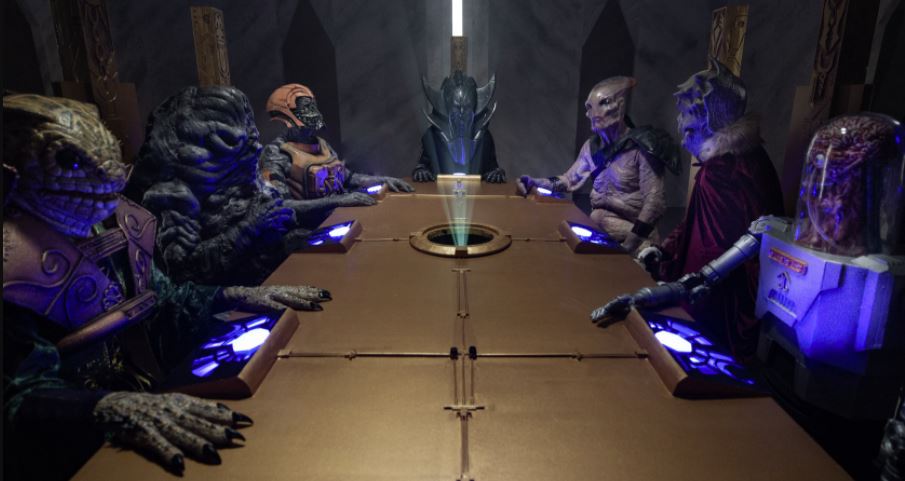 One last topic as we are running short on time, I’d like to know more about designing all the different creatures and suits for the film because there is a lot of really wonderful practical effects work on display in PG: PSYCHO GOREMAN.

Well, for me it was just all about variety. One thing that I always reference is in THE EMPIRE STRIKES BACK: the lineup of bounty hunters. I mean, that’s a classic scene that everyone loves because you see that group of weirdos and you’re like, “I want to know what IG-88’s deal is. I want to know what Zuckuss is like.” I like where you get just a splash of different characters and you almost don’t have time to take it all in. I think there’s a fine balance with it. You can go overboard and cut away too quickly though. I want these characters to have a distinct visual style, but also give them moments to show their personalities as well. Even if they are just brief moments.

I just had a ton of fun coming up with all these random, weird monsters that populate this movie. A lot of them were leftover ideas from other things, like half thought up stories that I didn’t really know what to do with. So, I just transplanted them into this because having everything feel completely disconnected, I think helped make it feel bigger. The universe of the movie feels bigger because, for example, PG’s crew of villains, The Paladins Obsidian, those five guys, were all so distinct that I wanted you to look at them and be like, yeah, these feel like a bunch of characters that came from completely different planets that team up to be this evil crew.

I want the audience to look at those characters and wonder, where are they from? What is their deal? Why is that guy a giant trashcan full of bodies? I want the audience to ask questions because I think that gets the imaginations going. I think half the fun of this kind of movie is getting you thinking and wondering about what led to this moment and what’s going to happen after this. In the way that… Yeah, that scene in THE EMPIRE STRIKES BACK makes you wonder, it’s kind of like, where did these crazy guys come from?

RLJE Films will release the Horror/Comedy PG: PSYCHO GOREMAN in Theaters, On Demand and Digital on January 22, 2021.