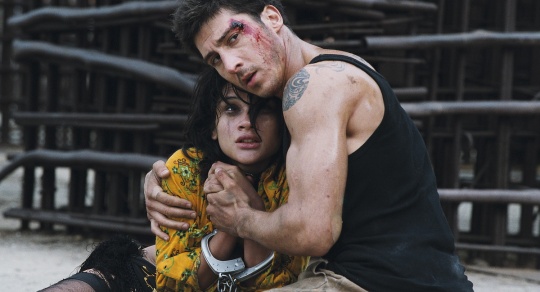 With good fight scenes and extraordinary parkour sequences, District B13 is quite the entertainment.

Plot: In the crime-infested, gang-ridden slum of District 13 in Paris, ex-thug and District 13 resident Leito must partner up with undercover cop Damien Tomaso must battle gang leader Taha and corrupt authority to defuse a bomb and save Leito’s sister Lola.

Review: Besides being a martial arts film for the martial arts enthusiasts, District B13 is, perhaps, better known for its parkour sequences. The lead actor David Belle is commonly hailed as the pioneer and founder of modern parkour, and this film completely vouches that claim. Just when you get to Belle’s first chase sequence within the first few minutes, you could already tell that District B13 is really worth binging on your popcorn and ICEE for. Belle is that man who makes the kinds of stunts that most people are scared of doing, whether it’s going over hurdles or jumping from a higher floor, look easy. He displays his fine technique throughout with some sort of clean and clear precision that directly translates his work into an art, and the same could be said with Cyril Raffaelli.

Now onto the fight scenes. As a martial arts movie fan, I chose this movie because I heard that it was a martial arts film. While the fight choreography wasn’t exactly as I hoped to be, it was still pretty good. The camera angles might be a little too much, and those who recognize Cyril Raffaelli as the dynamic kicker twin from Kiss of the Dragon may feel like he’s somewhat underused, but the fighting still has its moments such as the casino fight and Cyril making use of a steering wheel in combat. Additionally, much like Ong Bak, District B13 mixes acrobatics with hard hits to a certain extent, and it is 100% raw talent, no wires or CGI used, which is not something you see everyday in 21st-century films.

Besides the action, the dystopian setting for the film, which comes in the form of the ghetto-ridden District 13, is very convincing. The district is unkempt, filled with ramshackle buildings and surrounded by a wall. There is no education outlet for the residents there, yet the government wants to save Paris from District 13 instead of saving the victims within District 13. The characters Leito and Damien Tomaso have good chemistry and are like polar opposites. Leito is your street-smart, unorthodox dude, while Damien is a by-the-books, pillar-of-intellect cop, and just by their conversation, you learn enough about their history to understand their lines of reasoning.

All I gotta say is, with good fight scenes and extraordinary parkour sequences, District B13 is quite the entertainment.