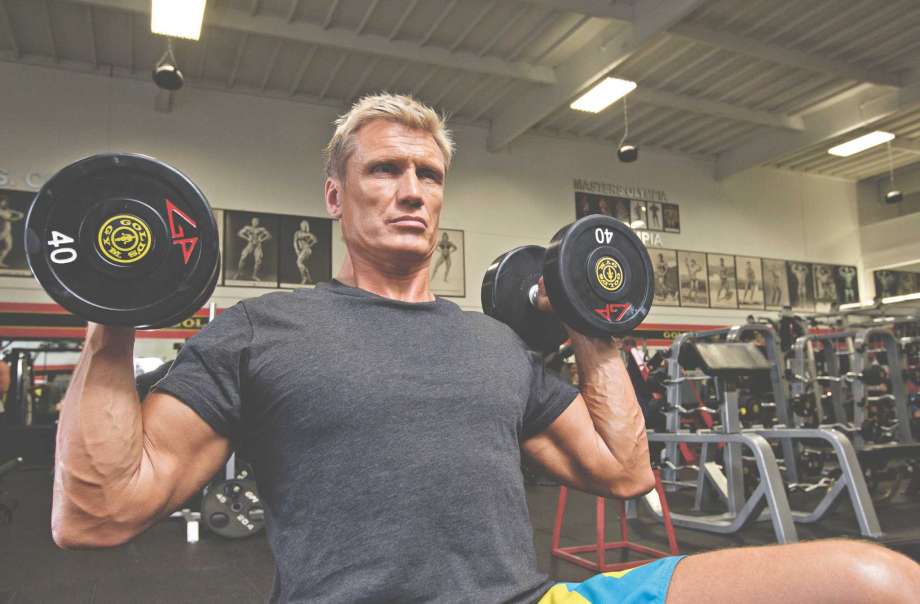 if you are looking for a fitness book that not only has detailed instructions and programs, but is also a great read and insight into one of the world’s greatest action heroes, then without hesitation I can recommend Dolph Lundgren: Train Like an Action Hero.

Summary: Are you ready to take your exercise and fitness routine to the next level? Then take a lesson from internationally-renowned action hero Dolph Lundgren, as he shares the personal fitness secrets gained from a lifetime of hard-fought experiences on-camera and off.

Dolph has created a personal philosophy of fitness based on martial arts, yoga, strength training, biochemical research, professional sports, and over 40 starring roles in classic action films. It’s a logical, fun, and surprisingly easy path to total fitness—whether you’re at the office, with friends, playing sports, or in class. This is the ultimate lifestyle to improve your health and build your physique!

Review: There are quite a few celebrity fitness titles in the marketplace and you may have found yourself wondering ‘did they really write this or just slap their photo on the cover?’ Well, let this particular book put those doubts to rest. Dolph had the idea for this book in the 1990’s when he had tentatively called it ‘Fit At Forty’. Fast forward to 2014 and now at age 56, and in arguably better shape than he was years ago, he opens up about his diet and exercise program, as well as his life.

Train Like An Action Hero touches on the following topics: Strength Training, Endurance Training, Stretching, Relaxation and Mediation, Fuel and Supplies, Self Defense, Training When You Have No Time and Tactics for achieving your goals.

In addition to the plethora of photos illustrating how to properly perform the exercise routines described in the book, Mr. Lundgren also shares some fantastic personal photos from his childhood. Another aspect I found interesting was how he details the workouts he employed during the shooting of Rocky V and The Expendables. Having these screen roles as a reference, the reader can easily identify how he made various adjustments to his physique and how they were achieved.

Unlike his 1996 fitness video Dolph Lundgren: Maximum Potential, this book has a strong focus on a gym workout utilizing free weights and machines. He does also touch on full body no weights workouts such as swimming, martial arts and boxing routines, but this is primarily a gym and diet guide.

Additionally, Dolph has also made this book autobiographical, with stories of his upbringing to present day working in Hollywood and various films right up to The Expendables. I found this really added to the overall impact of the book as we are able to get inside the head of the author and can recognize his reasons and motivations behind what he does.

I feel writing this book was somewhat of a catharsis for Dolph. He mentions the physical and emotional abuse he suffered at the hands of his father, who passed away about ten years after his move to Hollywood, how later in life they finally became good friends and his father’s influence on giving him the drive to go out in the world. He thinks his father would be proud and I am apt to agree.

Overall, if you are looking for a fitness book that not only has detailed instructions and programs, but is also a great read and insight into one of the world’s greatest action heroes, then without hesitation I can recommend Dolph Lundgren: Train Like an Action Hero.