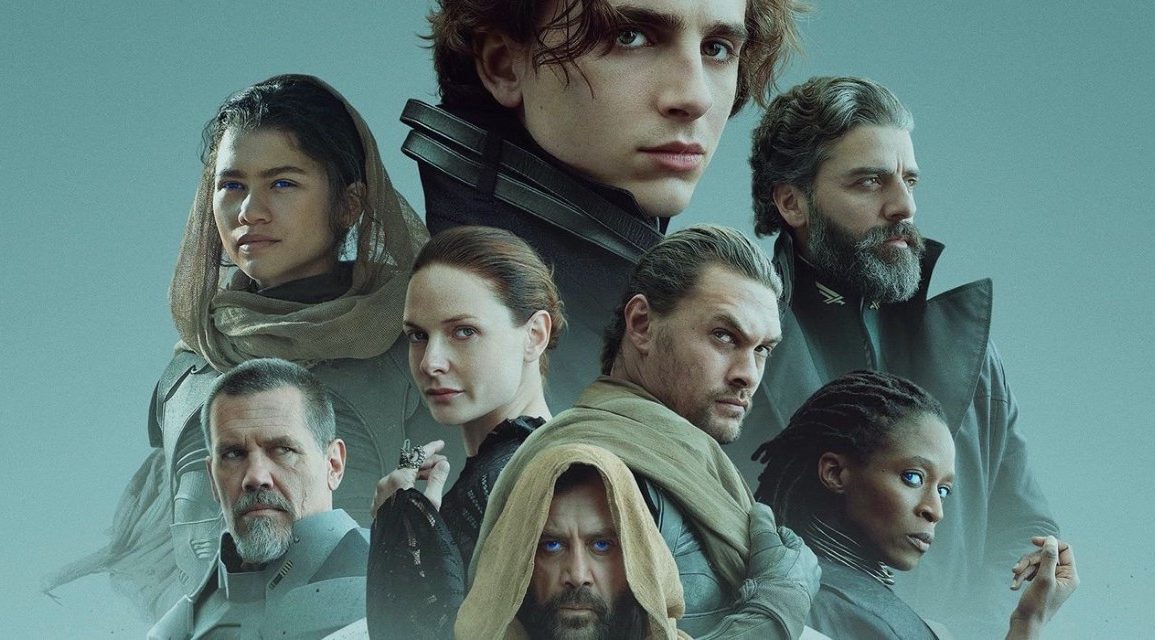 Epic but the Characters are Lacking

Despite all the behind-the-scenes’ melodrama, and online fandom arguments, this spectacle may still appeal. While some ardent book fans will still hate it regardless, the rest of us who just want some kind of coherent vision, this delivers the “E” in epic!

Plot: Set in the far future of 10191, it follows Paul Atreides (Timothée Chalamet, Hostiles) as he and his family, the noble House Atreides, are thrust into a war for the dangerous desert planet Arrakis, between the native Fremen people and the enemy invaders, the House Harkonnen. It is based on the first half of the first book and is the third movie/TV adaptation.

Review: Here we are with the long(awaited?) big screen update of the popular book epic. I have always struggled with this personally as I found the books impossible to get thru yet got a vague idea of why they appealed to readers for years. The 1984 David Lynch film is largely a drinking game of weird visuals, rising cult actors, catchy music and largely mundane storyline that has all the definitions of a “classic flop.” The 2000 Sci-Fi Channel mini-series and its 2003 follow-up Children of Dune are still worth a watch and possibly still the most engaging yet coherent vision of author Frank Herbert’s work due to making use of both its TV format and extra duration very well. Filmmaker Denis Villeneuve already had a good track record with both critics and moviegoers thanks to Prisoners, Sicario, Arrival and Blade Runner 2049. He was appealing to both mainstream and arthouse type crowds so would he appeal with this new book version as well?

I avoided as many trailers as I could like I do most big-budget blockbusters (save for a TV spot during the Olympics) and figured that this could either be another surprisingly appealing entry for hard-sci-fi fans or yet another creative misfire. I saw complaints about the lead star lacking in range due to him being the main focus now in a Sci-Fi epic. There were of course the usual 3 hour movie complaints and finally the sequel to this got greenlit a few days after its full release so I went in hoping that I wouldn’t have to endure another overrated misfire like The Hobbit trilogy and every other Marvel/DC comic book movie. I found it easy to get into but all of the characters are rather lacking here despite the dialogue, effects, vision, set design and music all being otherwise well-done. I also felt at times certain scenes were so darkly lit I could barely see what was happening; I know it was meant for atmosphere but it did get distracting.

The scriptwriters have varied by film but this happened to be with one not self-indulgent like Ridley Scott’s latest misfires; the effects, look and sets all help one feel as hot, sweaty and believable as the desert planet it’s set on; and this is a far more memorable Hans Zimmer score due to incorporating different instrumental styles that don’t’ feel like leftovers from his Christopher Nolan and Jerry Bruckheimer productions. The whole thing didn’t drag for me but I can’t speak for everyone. This doesn’t become a Battlefield Earth type misfire where it can’t be taken seriously but it does almost feel like John Carter where it was a cool idea that waited too long to be adapted (minus the overly-predictable Star Wars type story).

It also however, feels over-promoted to just make endless sequels as a prequel HBO Max show was even announced prior to it coming out so there you go! I won’t rank this as the cast or crew’s best work as anyone could had played these roles and the director has made far deeper works but still found it worth viewing. And yet I feel like what’s missing is an overall purpose as this doesn’t fully blow one away nor does it need to be an endless saga.

Are studios truly repressing the rights to make 3 hour films still? Because this could have been summed up better regardless of how a book progresses. Most of the shots feel well-timed and the whole film didn’t feel self-indulgent but despite not being a fan of multiple sequels, I’ll at least give the second entry a chance but this is the main quandary I got: if the other installment goes downhill, it essentially means this is all for nothing. If the other installment is better, it does signify something but this is once again why I’m opposed to seeing films that are stand-alone. And yet this clearly had so much care put into it and it still seems to be missing a few things.

I’ll need to wait and see but either way I reluctantly give this a pass as it was intriguing for a bit and while it doesn’t really bring much new to the Sci-Fi Fantasy genre, it’s also not loud, mindless or annoying like so many blockbusters aim to be nowadays. As a mild recommendation, I think it’s safe to say that it can please most genre addicts.