Plot: An emperor’s son flees the kingdom after being accused of treason and turns the tables on those after him and gets his revenge.

Review: An evil general (played by Kang Chin) garners his legions of fighters and followers and plans to overthrow the dynasty, and one of his first orders of business is to have the emperor’s son Sao (Tao-Liang Tan) accused of treason. Sao is a formidable fighter and he teams up with one of the general’s chief guards, a eunuch, who’s a turncoat against the general. The eunuch – a master fighter – teaches and instructs Sao some new tricks, and over the course of a short period of time, Sao systematically eliminates the evil general’s guards and elite soldiers in elaborate style. When it comes time to take on the general himself, Sao is going to need his tutor’s help, and their climactic battle is a doozy!

A gleefully gimmicky 3D kung fu movie with beheadings, dismemberment, stabbings, gauging, slicing, falling, flying, and jumping in the third dimension, Dynasty is a real hoot of a martial arts movie. Memorable scenes includes a sequence where a guy gets his hands chopped off but proceeds to fight on against his attacker in a forest (my personal favorite scene), a doozy of a fight between a monk and the evil general, and then the wowzer of a climax that involves some very unusual weaponry like a metal umbrella versus a flying chainmail coat. The 3D gags just keep coming, and even in 2D the movie is fun to watch. From director Mei-Chun Chang, Dynasty might not reinvent the kung fu wheel, but it certainly goes for broke to try to entertain you.

Kino Lorber has just released a deluxe edition of Dynasty that contains two different 3D viewing options, as well as the 2D version. It also comes with a set of 3D glasses, and the disc can be played on any Blu-ray or 3D player. In a time when 3D seems to be winding back down again, here’s a welcome addition to your 3D collection. Special features include a restore 1950’s 3D comic book, restored 4-channel Quadrophonic sound, plus three 3D featurettes, including a 3D music video. The colors of the film are a little faded, but I expect that the movie has never looked or sounded better, aside from its original theatrical release. 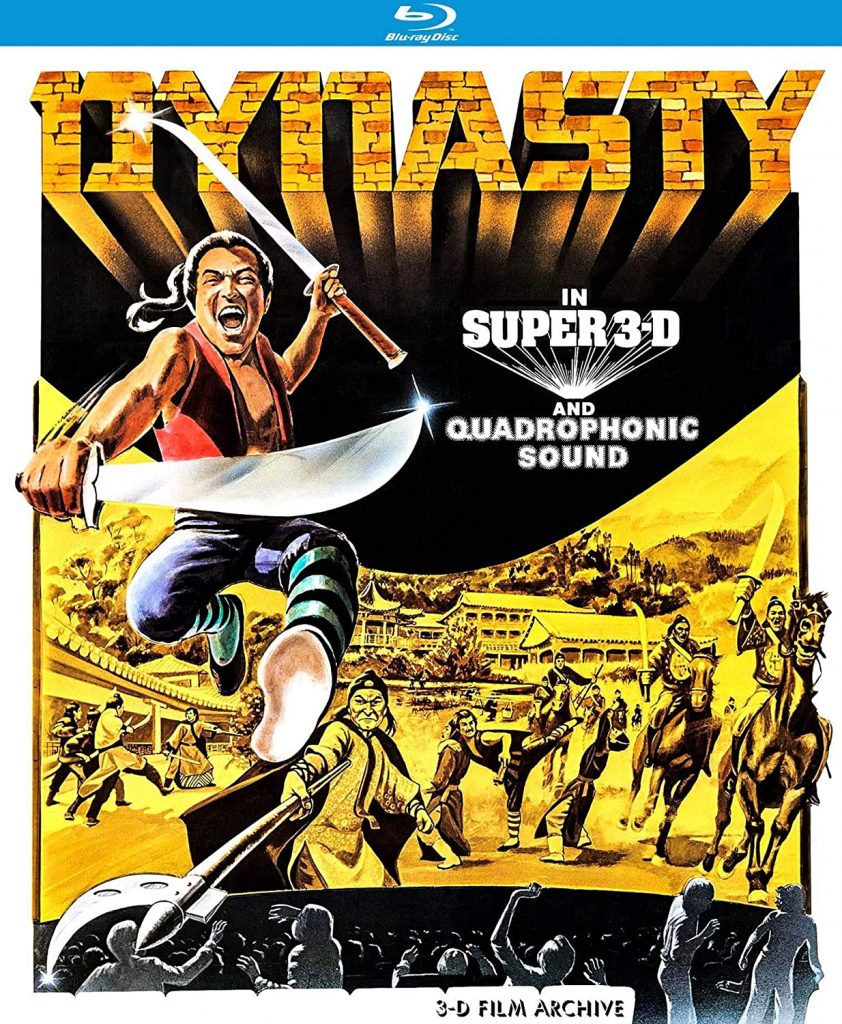