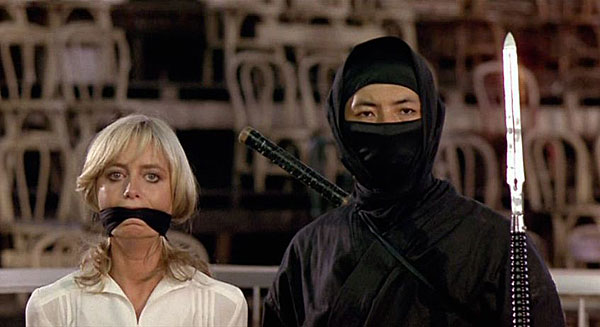 In 1981, Enter the Ninja was probably badass. Sho Kosugi’s first appearance in a big movie is still pretty great. In 2015, Enter the Ninja is goofy, like really goofy. But that’s okay, right? If you’ve read this review up to this point, then you’re this movie’s target audience.

Plot: The Ninja is the highest honor given to the dedicated followers of Ninjutsu, the deadliest of all martial arts… Enter the Ninja explores the absorbing detail the Ninja’s lethal, little-known Art of Invisibility which includes the use of hypnotism, explosives, and super-human acrobatic fighting skills. Set in Japan and the Philippines, the film tells the story of Cole (Franco Nero, The Mercenary) a westerner who’s been inducted into the secret fighting rituals of the Ninja. Coming to the aid of his friends against some land grabbing oil barons, he easily takes on all opponents until a Ninja assassin; Hasegawa (Sho Kosugi, Revenge of the Ninja) is brought into the fray. The two masters make use of all the exotic weaponry at their disposal… making this one of the most sensational battle-to-the-death sequences ever filmed! Hollywood legend Menahem Golan (The Delta Force) directed this fast-paced, high quality, tough-as-nails martial arts film with style and poise. Co-starring Susan George (Sudden Terror) and Christopher George (Day of the Animals).

Kino Lorber Blu-ray Review: Menahem Golan, director and producer at The Cannon Film Group, saw potential in bringing Japanese ninja movies to western audiences, and Enter the Ninja (which he directed) is the first big westernized ninja movie that made a dent in western consciousness. After this came Revenge of the Ninja and American Ninja.

In this film, Franco Nero plays Cole, a newly inducted master of ninjutsu, and his rival, an embittered Hasegawa (played by Sho Kosugi, in his first notable ninja movie), holds a grudge against him for not being Japanese. Cole leaves the ninja clan to visit an old war buddy Frank (Alex Courtney), who’s living in Manila on a plantation. Frank and his wife Mary Ann (Susan George) are being harassed by a wealthy businessman because the plantation is sitting in the middle of an oil field. Cole helps them out by fighting off the thugs who come calling during the night, but when the problem escalates to the point when Cole’s rival Hasegawa is called in from Japan to eliminate them, shit gets real.

Watching Enter the Ninja is amusing. I’m not sure if it was amusing the first time I saw it when I was much younger, but this stuff is pretty ridiculous now. I love ninjas, I love Kosugi who’s always so serious, but Franco Nero as a white garbed ninja? I’m not sure I love that. And his buddy Frank is the biggest wet blanket ever. His hot wife sleeps with Cole during the night, and the next morning Frank is talking about how he feels like a man again. It’s painful. The villain (played by Christopher George) is an idiot. He screams and hollers for help while ninja stars are being flung all around him, and it’s just cartoony.

In 1981, Enter the Ninja was probably badass. Sho Kosugi’s first appearance in a big movie is still pretty great. In 2015, Enter the Ninja is goofy, like really goofy. But that’s okay, right? If you’ve read this review up to this point, then you’re this movie’s target audience.

Thanks to Kino Lorber’s “Studio Classics” label, Enter the Ninja is now available to own on high-definition Blu-ray. The movie has never looked or sounded better, even compared to MGM’s 2011 DVD-on-Demand release, which looked and sounded better than any previous release before that. This was a VHS and cable stable throughout the 1980’s and early 90’s, so if you’re a Cannon completist or a hardcore fan of Kosugi or ninja films in general, then this recent release should be a must-own. The disc comes with the original theatrical trailer. If you want to keep going with your collection, then you’ll be glad to know that Kino Lorber also released the sequel Revenge of the Ninja on Blu-ray simultaneously.