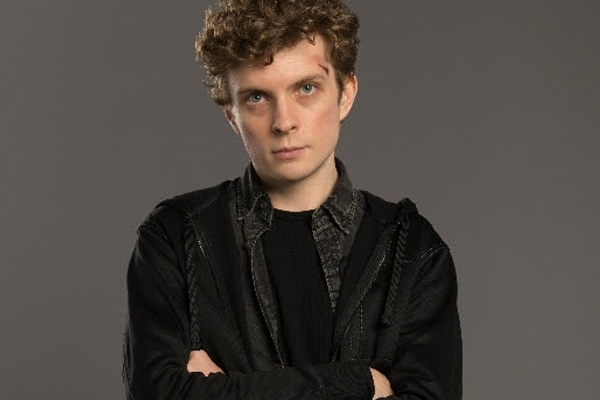 Leading up to the Season 3 premiere of Continuum, we spoke to Saturn Award nominee Erik Knudsen and discussed his thoughts on the show, changing the future and why co-star Victor Webster is bitter.

When Kiera Cameron (Rachel Nichols), a Vancouver CPS officer in the year 2077, is unexpectedly sent back in time to 2012 along with a group of convicted terrorists, the technology in the future suit she is wearing manages to connect with a frequency used by Alec Sadler (Erik Knudsen). A 17-year-old computer genius, he has, unbeknownst to him, created the foundation for all the technology that runs the world in 2077.  Initially just a voice in her head, Alec becomes one of Kiera’s most important allies in her efforts to stop the terrorists from wrecking havoc in the present and changing the future.

The show has such a great look, what do you think differentiates it from other Canadian productions?

I agree; for me it’s always been about the camera work. For some reason the cameras always look different in Canadian television and with Continuum, all our directors and DPs have such strong camera backgrounds, and they shoot it very much like an American production. The CGI is flawless – we have the best effects people in the business and I know that in Season 3 it gets even better.

How important is social media to a show like Continuum?

Huge. Sci-fi is for the fans and social media is great for changing how fans have a take on the show. When I worked on ‘Jericho’ social media was just starting to follow shows and now fans can get together and maybe sway our story arc a little bit depending on what people are saying, so I think it’s a great thing for programs, especially sci-fi.

The online poll was a great way for the fans to interact and make a story change – how much time did you have from when the results were in and you had to shoot?

Not very long; usually we get our scripts about 4 days before shooting so we don’t really know ahead of time what is going on with the story. The writers know what they are going to do and we are given a framework of what we will be doing that season and for the entire show. Scripts can always change but once we get those we can start shooting pretty quickly.

In seasons 1 and 2 Alec was always the brains of the operation but behind a computer screen. Now he has gone back to save Emily and he is becoming a bit of a bad ass.

He is – that’s what we are seeing, this innocent farm boy who had no idea about the technology or the future that was ahead for us. In season 2 he learned more about the choices that he had to make, and in season 3 he is making those choices and not letting anyone get in his way. He has betrayed Kiera, who is his best friend, but Emily is his first love and those are strong emotions so he will do anything for her.

Exactly and he is not even sure if he can get Kiera back to her family, but he feels saving Emily is the better choice. He doesn’t know and no one really knows if Kiera’s family even exists because of the timeline changes so it was a hard choice for him.

Because Continuum is not linear, in so much as it’s time travel, do you think the choices Alec is making now will make him a different Alec that we know in the future?

Absolutely; that’s what we are seeing now, that everything is not black and white or laid out for you. It is your choice and you can choose your destiny, but having said that, by him making these choices is perhaps what makes him a bad person. Like when Kiera wanted to kill Julian but didn’t. Maybe her holding the gun to his head made him the murderer that we know in the future. I think we can change our destiny but the choices may not have the consequences intended.

Kiera has always said that future Julian is a murderer, but when we see him in the future, he is turning off some Sadtech and freeing a warehouse full of people who are essentially drones. It really seems that one person’s terrorist is another’s freedom fighter.

Exactly; but we don’t know if there are better ways. Liber8 is all about violent actions and controlling people to change history whereas Alec thinks technology can change history so it is a battle over ideologies and who is right, who is wrong, and who will win.

Has playing Alec made you more aware of the technological and social changes happening in the world today?

[pullquote_right]This show has really opened my eyes[/pullquote_right]Oh absolutely! I never really realized until I got this part and started looking at everything that was going on and I have definitely had an increased interest in politics and what is happening in the world, but this show has really opened my eyes. Continuum is showing the world what is happening today but in an entertaining way and also educating viewers.

Continuum at its heart is a police procedural show while at the same time balancing many side stories in the present and the future. What is it about the show that you think has really struck a chord with viewers?

It is a procedural but it doesn’t have one note throughout the entire season. I like how with Kiera and Liber8 we see so many sides to an issue and as we touched on before, people can express their anger of what is happening in society through the show. We know our audience is intelligent and they can see these things happening around them. Continuum is not black and white and it can be unpredictable. There is no right or wrong – we don’t know who is THE bad guy and it leaves so much open to interpretation.

One thing that I really like about this show is the fact it is un-apologetically Canadian. Vancouver is not doubling for Chicago or another unnamed US city. Was that important to make it Canadian and was that a deciding factor in you taking the role?

[pullquote_left]I am not much of an ‘LA boy’[/pullquote_left]Yeah! I am very proud to be from Canada. When I first read the pilot it was not specified that it was set in Vancouver but Simon and the producers are all from here and have worked everywhere else. It is a beautiful city and it looks great for sci-fi – has some neutral gray cloudy skies that can make it look foreboding – some fantastic buildings and architecture. These guys (the producers) wanted to stay home and work on a really great project and not travel all the time. Vancouver has so many great things they wanted to feature and as a Canadian is something I am happy about. I prefer to stay at home – I am not much of an ‘LA boy’. I prefer to be where people are not always surrounded by the entertainment industry (laughs).

We spoke with your co-star Victor Webster who said the following: “If there is a weak link anywhere, it is going to be Erik Knudsen. I mean come on! You can’t be THAT good. He is a diva. He only wants green M&Ms in his room, he has to have a masseuse on set, he has someone following him around with an umbrella outside, it’s crazy. He even brings his own paparazzi and rides an electric scooter everywhere.” Would you like to respond?

(laughs) Firstly, the person holding my umbrella is just there to maintain my translucent lily white complexion while I use both hands to eat my hand selected green M&Ms. I am playing a genius nerd. No one would believe me as a nerd if I had my naturally rich golden tan. Secondly, I think Victor is just bitter because of my slender teen-like physique. He is constantly asking my workout habits and dietary restrictions and how I keep so lean. I kid obviously. But seriously, look at Victor. Must be hard having the chiseled body and jaw structure of a Greek god. He is always a pleasure to work with and is the rock for all of us in Continuum. With all alliances switching on the show, Carlos has always had the best intentions and characters feel safe with him. A wonderful, talented, tall and handsome man that I look up to… literally.

We really appreciate you taking the time to talk today and continued success with Continuum.

Thank you so much.

The third season of Continuum will premiere on March 16th in Canada on Showcase and April 4th in the United States on SyFy.