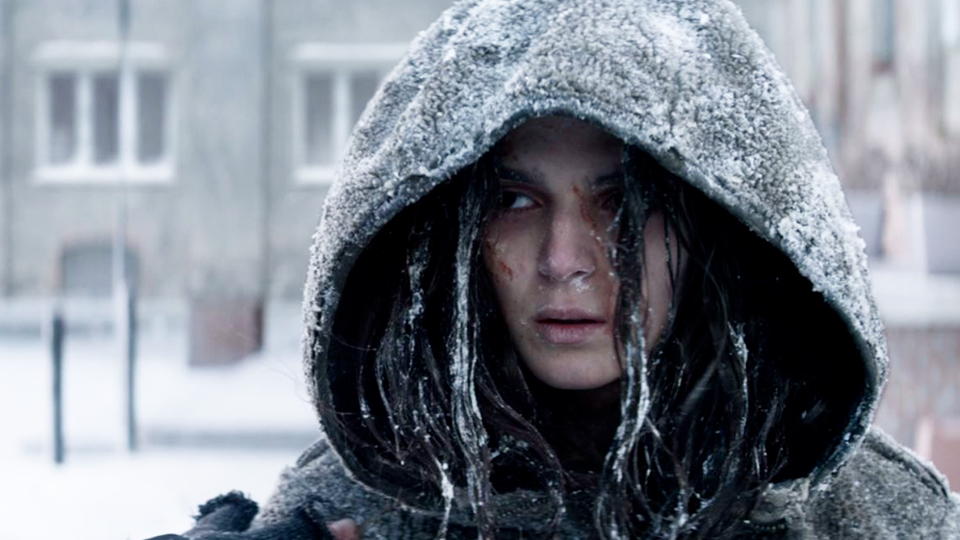 Listening to the soundtrack after watching the film might be a way to help complete the experience, and as I’ve now listened to the score a half a dozen times while working, I can safely assure you that I’ve made my peace with Extinction.

Plot: Nine years after an infection turns most of the humanity into rabid creatures, Patrick, Jack and Lu, a nine-year-old girl, survive in seeming peace and calm in the forgotten snow-covered town of Harmony. We nonetheless sense that something terrible happened between Patrick and Jack because a deep hate keeps them apart. When the infected appear again, Patrick and Jack will have to leave behind all rancor to protect the one being who means more to them than anything else.

Review: The apocalypse is not only in vogue in motion pictures right now – it’s the rage. Every other week, it seems, there’s a brand new post-apocalyptic movie or T.V. show premiering, and if you can’t keep up, don’t worry – I will do it for you and carry the baton to the last bastion of humanity where I will herald the news of what became of the world and all those end-of-the-world movies and T.V. programs. Everything from zombies to viruses to nuclear fallout is a personal safe zone for me in terms of discussion, and a few weeks ago I made my way to a multiplex where the new film Extinction was playing. While the film was fairly ho-hum in its execution and delivery, it did have some merit for a wasteland-hardened movie scavenger like me. Just in that week alone, I probably saw three or four new apocalyptic films, and this one ranked on the lower echelon of those few, but as I’ve come to realize, I’m always happy to review anything with such themes of global devastation, and in this case, I’ll also review the soundtrack.

A zombie apocalypse occurs, and chaos ensues on a global scale. Friends Patrick (Matthew Fox) and Jack (Jeffrey Donovan) manage to keep everything together, while protecting Patrick’s wife and baby daughter Lu, but after a military convoy is ambushed by a horde of zombies, Patrick, Jack, and Patrick’s wife and baby are forced to go off on their own and find shelter in an abandoned town. Over the course of some weeks, Patrick breaks down and goes on an alcoholic binge, putting his wife and baby in harm’s way, and after his wife is killed by a zombie on his watch, Jack steps in and takes Lu from him, relinquishing him of his fatherly duties. Nine years pass, and Patrick and Jack have managed to survive what appears to be a nuclear winter in the wake of the aftermath of the zombie apocalypse.

They live next door to each other, and Jack has assumed all responsibility for raising Lu (played by Quinn McColgan), who is more or less oblivious to the horrors of what befell the planet. Patrick is an alcoholic survivalist, resentful of Jack’s ability to hold himself together and take care of his daughter, while Jack overprotects Lu to the point of keeping her a prisoner in their home. When some straggler zombies amble into their town again for the first time in nearly a decade (looking like they’ve evolved into Descent-like mutant creatures), Jack and Patrick realize it’s time to mend their broken bridges and work together to save themselves from the second coming of a new breed of zombie.

The film, from director Miguel Angel Vivas, lacks distinction in almost every way, and the film must rely on performances from its game cast to carry the film. Another crutch the film relies on is the adequate score by Spanish composer Sergio Moure, who is a composer I’ve not been familiarized with. His compositions for Extinction range from swooning emotional passages to swirling, heart-pounding cues that give the characters in the film the resonance they otherwise might not have had. The music isn’t bad, considering it’s for a film that will easily get lost in the shuffle of other post-apocalyptic pictures to be released this year and over the next few after this one. This was a nice, competent score from a composer who sounds comfortable working in the action / adventure / horror genres, and he shows some range with the solid work he did for this film.

Soundtrack giant Varese Sarabande has released the soundtrack to Extinction onto CD, and while it may not be an immediate “must own” score, it may be a good impulse buy, especially if after watching the film you get the sense that you’re not entirely satisfied. Listening to the soundtrack after watching the film might be a way to help complete the experience, and as I’ve now listened to the score a half a dozen times while working, I can safely assure you that I’ve made my peace with Extinction.