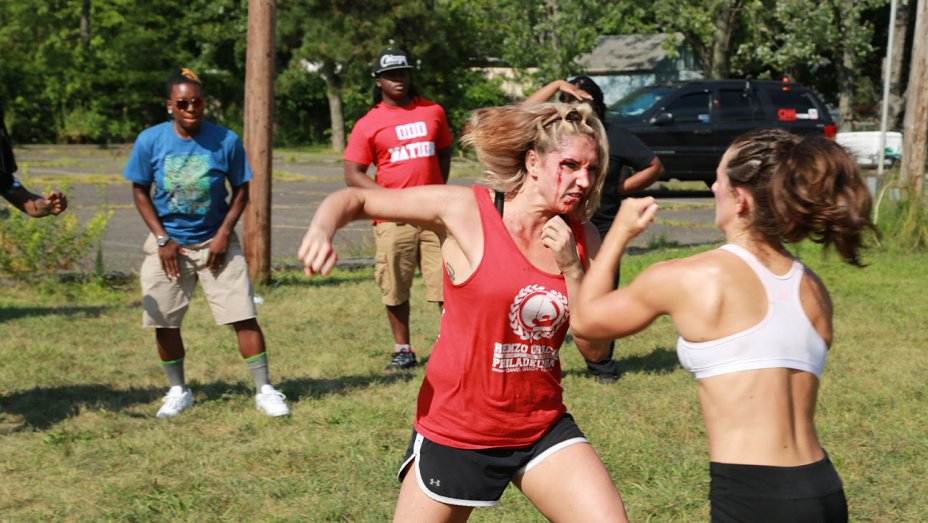 Fight Valley is a missed opportunity and hopefully the flaws can be remedied with the impending sequel.

Summary: A young woman is found dead after getting involved in an underground fighting ring. Her sister Windsor begins training under a respected ex-fighter as she searches for the killer.

Review: A murder mystery wrapped up in a grungy little package so-starring some of UFC’s biggest female fighters currently competing in the ring, Fight Valley might have been something that filmmaker Albert Pyun would have directed once upon a time, and it would’ve played on cable and had a long shelf life on VHS or DVD once upon a time. In today’s movie market, there is no middle ground for films: There are big budget theatrical releases, and there are no-budget shot on digital movies that scrape their way into the marketplace with zero fanfare or marketing. The latter spectrum is where Fight Valley falls into. It looks like it was shot on a camcorder, utilizing a cast of mostly unknowns (aside from the three or four UFC names), a junky first-draft script, and is directed by a guy named Rob Hawk, who (if I’m not mistaken) is an underground rapper. If there’d been some money behind this venture, and some fine-tuning on the screenplay, the movie (with the proper direction, of course) could have been a real cult action film with some surprises. I can see it now: There’s a murder in the hood, and the sister of the murdered woman comes to town and infiltrates the underground fight circuit to find the killer. I mean, seriously: If you’ve seen movies with Don “The Dragon” Wilson, Jerry Trimble, or anyone who had a deal with Roger Corman in the ’90s made this very same movie. Heck, Corman produced a movie called Angelfist that absolutely is this movie right down to the tee, complete with a cast of female fighters.

Fight Valley gives Miesha Tate (who lost twice to Ronda Rousey), Holly Holm (who defeated Rousey), and Chris “Cyborg” roles that might have made them shine, but only Tate is given anything to do in the movie. She looks freaking amazing with her tree trunk legs and powerful looking torso, and her role as the trainer to the young woman who is out to avenge her sister’s death is a worthy mark on her score sheet. Holm isn’t given anything to do but have a few simulated fights and act as a bulldog against Tate’s character. “Cyborg” has a supporting role as a suspect of the murder in question, but her character isn’t dimensional in any way. There are fights aplenty, lots of scenes where characters growl and curse at each other, and we’re meant to understand that these characters are stuck in a hood they’ll never emerge from. None of these characters have real ambition, which is a shame because with the obvious talent some of these girls have in the ring, it’s clear that they should be aiming for the big time.

There’s nothing noir about Fight Valley, even though there should be. Look what Soderbergh did with Gina Carano and Haywire. Rob Hawk, the director of Fight Valley made an ugly little movie with superstars, and my advice to him for the sequel (which is apparently happening) is to laser in on the raw talent of these amazing women and fashion the film around them, rather than losing focus on the grime of the hood. There are so many great stories you could tell with these diamonds in the rough.