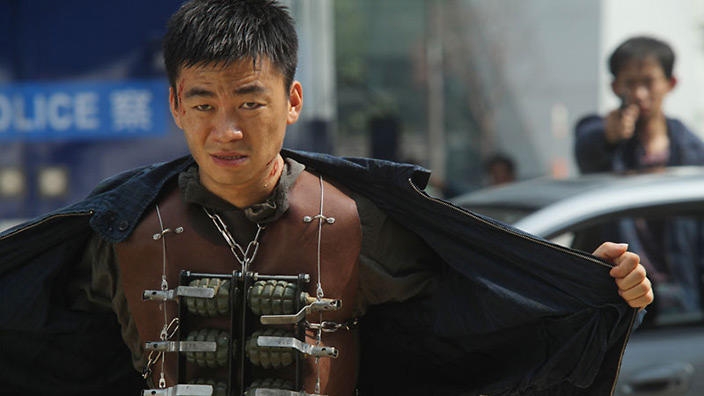 Some good stunt work and impressive pyrotechnics make sure to cement this one as the best contemporary action film from Hong Kong in 2010.

Plot: Two Hong Kong cops — each with a reputation for excessive force — team up to solve the murders of a prostitute and another policeman. Inspector Kee (Richie Jen) of the narcotics bureau approaches Captain Manfred (Leon Lai) about finding a street thug who lured Kee’s partner to his death. Manfred, however, already has his hands full covering up his partner’s relationship to a hooker who recently turned up dead. But when it becomes clear both cases are related, the two cops join forces.

Review: Dante Lam’s career started off with a bang, with a handful of films that had either a focus on different units of the police force or street-level Hong Kong crime stories. He had also successfully done films in other genres as well, proving that he can do more than just action. He had also been known to have a fascination with tactical and military weaponry, so it was a blessing to the action genre that he staged a career comeback in 2008. Fire of Conscience was a great example of a combination of his more character-driven work and his bombastic big budget action.

Leon Lai and Richie Ren play two men who ultimately are at odds with one another, and the film does go one level deeper with some intriguing stuff about both characters having their destinies determined by their birth year, the Year of the Dragon, with the film culminating during the Tai Hang Fire Dragon Dance. The action is definitely above average with one standout scene being the teahouse shootout.

This was a real slick scene, with tight editing and great sound effects work. Lots of nods to John Woo and Hard Boiled! Some good stunt work and several grenades being used to up the pyrotechnics make sure to cement this one as the best contemporary action film from Hong Kong in 2010.

On it’s 10-year anniversary, I re-watched it last night, and I enjoyed it more than ever! It’s time for Dante Lam to do another film like this!