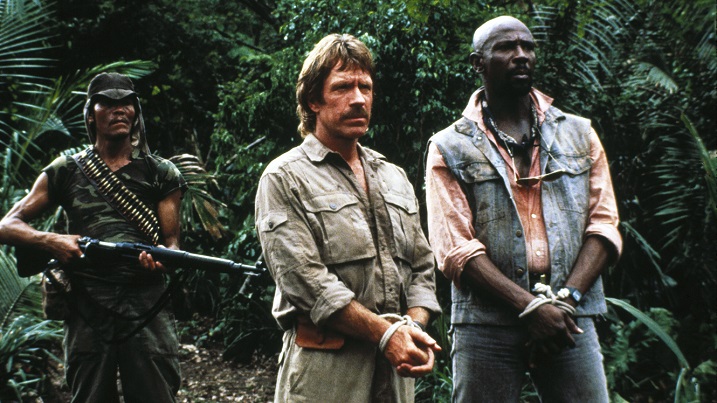 It lacks special features but Firewalker in itself is a lot of fun and is nicely remastered.

Plot: A pair of adventurers try to track down an ancient Aztec/Mayan/Egyptian/Apache hoard of gold.

Review: Chuck Norris went in a PG direction with Firewalker, which is his answer to Romancing the Stone and Raiders of the Lost Ark. He and Lou Gossett play Max and Leo, two bumbling adventurers who get caught up in a treasure hunt somewhere in South America. Their benefactor is a cute blonde (Melody Anderson from Flash Gordon) who has a map leading to Native American gold in a cave. They get captured by an evil Indian (Sonny Landham, later in Predator), get into cantina fights, traverse rivers full of crocodiles, and have a blast being the guys that they are. Norris shows off his signature kick several times in slow motion.

Anyone familiar with Cannon’s Indiana Jones rip-offs like Treasure of the Four Crowns and King Solomon’s Mines will feel right at home seeing Chuck Norris in this lightweight adventure. He cracks jokes, laughs, and romances a pretty blonde while being Lou Gossett’s best buddy. It’s as fun and innocent as action films get. J. Lee Thompson (who did a bunch of films with Charles Bronson like Death Wish 4 and St. Ives) directed this. John Rhys-Davies (from Raiders of the Lost Ark) shows up in a cameo. Gary Chang did the electronic score.

Thanks to Olive Films (whose recent slate of releases includes Stone Cold with Brian Bosworth and Behind Enemy Lines with Thomas Ian Griffith) Firewalker has been remastered for Blu-ray, and it’s never looked better. For proof positive, I put on my MGM DVD disc immediately after the Blu-ray finished, and compared the picture quality, and there was no question that Olive has made sure that Firewalker has been given the ultimate visual upgrade (but without any supplements, alas).

Little by little, Chuck Norris’ filmography has been making its way to hi-def, and it’s a shame that MGM/Fox didn’t follow through with that initial onslaught (in 2012) of Norris Blu-rays that included the first two Missing in Action films, The Delta Force, Code of Silence, and Lone Wolf McQuade. Scorpion did a nice job with The Octagon last year, and Kino Lorber is about to drop Blu-rays of An Eye For An Eye and Hero and the Terror, and now Olive has filled in an essential gap in the Norris library with this pristine looking disc that is now available to buy via their site (http://www.olivefilms.com) or your local retailer. Essential purchase.