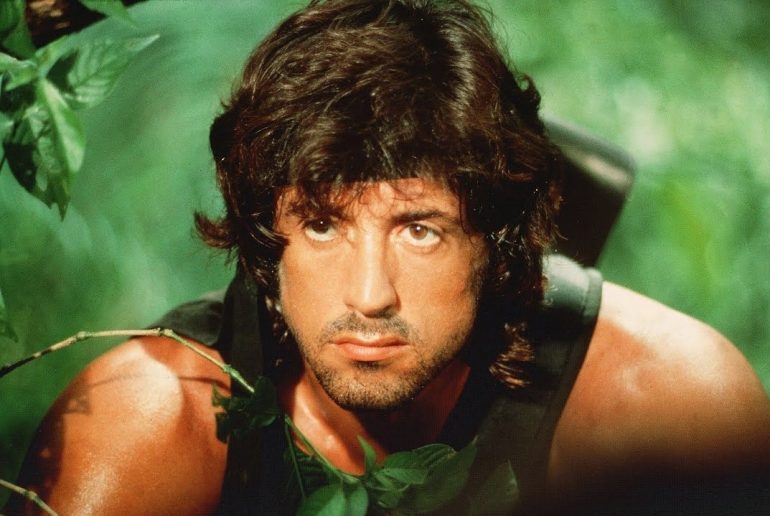 Rambo. Just saying the name, what does it illicit images of in your mind’s eye? A warrior rampaging through a far-away jungle, a big-ass gun in his arms, a sneer on his face? A soldier with a big-ass knife, stalking an enemy target? A lone and forgotten man taking a solitary walk down a road? To many, Rambo embodied a generation, a disillusioned gladiator returned to his home that he shed so much blood for, and hardly recognizing it. Created by author David Morrell, John Rambo has starred in five feature films to date.  However, for the purposes of this article, we’re going to compare what are arguably the two best: First Blood and Rambo: First Blood, Part II.

Plot: A war veteran suffering from PTSD drifts into a small Washington town and starts a private war when he runs afoul of the local sheriff.

Story: In my humble opinion, First Blood is one of the finest war stories ever committed to film. During the Vietnam War, there were many protests against the campaign in the United States – but this film seems to ask what about the soldiers who actually fought in the war? How would they feel, coming home to find the people they were supposedly fighting for treating them with derision and disdain? The beautiful thing is, the choice is always in Rambo’s hands – he could have kept walking after Brian Dennehy’s sheriff gave him a ride to the edge of town. He could have stopped running at any time, could have stopped fighting, turned himself in. But to do so would have not just been a disservice to him, but to every last comrade, he fought beside and lost in the war. On the flip side, it’s not just a fascinating take on how war heroes are treated when they return home, but a very poignant commentary about how the military creates killing machines who can’t simply turn it all off when they resume their normal lives.

Characters: The terrific aspect of this movie is that you can easily understand where both the main characters come from. As an audience member, you’re instantly going to sympathize with Rambo, the misunderstood outsider who is only doing what he knows what to do. Sylvester Stallone has never gotten, in my opinion, the suitable praise for the acting job he did in this movie – his quiet, dead-eyed portrayal of a man pushed too far is excellent. Likewise, Brian Dennehy has that respectable, every-man air about him, that makes his sheriff so believable – unlike the more aggressive Deputy Galt, Dennehy’s Sheriff Teasle doesn’t initially want Rambo hurt – just taught a lesson. That Rambo was pushed too far in his absence is a sign of the negligent viewpoint in which he views Rambo himself – just another vagrant. His obsessive pursuit of Rambo throughout the film tells the guilt he feels for mistreating an American hero but also for unwittingly unleashing a monster to wreak havoc on his small town. Richard Crenna is perfect as the superior officer who truly knows what Rambo is capable of, but is unable to stop the machine until it’s almost too late – as the army can’t stop the very creations they create in battle.

Action: While it’s often billed as an action film, and there are certainly action parts in the movie, I’ve always viewed this movie as a psychological thriller than a straight action film. That being said, there are fine action scenes threaded throughout the film. The immediate sequence that comes to mind is the initial chase between Rambo and Teasle, a marathon that leads them through the woods of Hope, British Columbia (standing in for Washington).  The chase ends spectacularly with a leap of faith by Rambo and a less elegant and more deadly fall for Deputy Galt. There’s also the search through the woods by Teasle and his men (I love when Rambo emerges out of nowhere and holds a knife to Teasle’s throat while threatening him to back off or Rambo will bring a war he won’t believe), that ends badly for the sheriff department, as well as Rambo’s desperate trek, to escape the cave he’s trapped in. The final big sequence is satisfying, with Rambo blowing up a gas station and then absolutely destroying a guns and ammo shop. Rambo is that perfect blend of carnage and introspection, a rare feat in the movie world.

Plot: John Rambo is released from prison for a mission that sees him return to Vietnam to find missing American P.O.W’s.

Story: The story with the sequel is every bit as good as the original. For starters, this was one of the more logical premises for any sequel – Rambo’s expertise in Vietnam is needed for a covert mission. Done. Simple, sweet, and makes sense. It’s great when movie sequels make sense, isn’t it? The fact that he gets screwed over by the people behind the mission is even better and keeps up the subtext of Rambo choosing a life of a loner due to multiple betrayals. Having him captured again is brilliant, and the inclusion of the Russians was a great idea, as it gives Rambo a specific target to focus his hatred on, in the person of Steven Berkhoff’s Colonel Podvosky. What makes this movie even more gut-wrenching, though, is that true happiness is dangled in his face, as his budding romance with Agent Bao allows him to dream of a life outside the battles that he has waged through much of his life. Her death just punctuates that he is a man in an endless loop, a hamster on the wheel, and his puppet strings are manipulated by those who profess a love for his country, but their actions exhibit the exact opposite of their claims.

Characters: Sylvester Stallone is terrific again as Rambo – I did find his speech at the end of the movie a little forced, and less natural than his ranting at the end of the first film, but it was definitely a speech that needed to be said. Bringing back Richard Crenna was a smart move, as not only do you have Crenna’s steady hand at the wheel of his role, but also a familiar face to audiences, and someone who will aid Rambo amongst a sea of snakes. Julia Nickson is a rock as Agent Bao, an innocent who has to grow up too fast, and dreams of a better life. As for the villains, Charles Napier is suitably oily as the smiling car-salesman of an Army Major, who will do what’s best for the politics of the mission and damn the human collateral. Steven Berkhoff has always been underrated as a movie heavy, and his psychotic Podvosky immediately makes you want to see him die in all sorts of gruesome ways. All of the characters are well-conceived, well-acted and play the parts they’re meant to play in perfect harmony.

Action: While the first movie was more stealthy and seemingly strategic in its action scenes, the sequel is balls-to-the-wall action, a perfect change from the first film. Rambo is back in his element, allowing him to kill again, and he does it with a machine-like intensity that makes his reputation as a one-man army all the more believable. From taking on a gunboat and destroying it with an RPG, to battling his way across Vietnamese fields, towing an injured P.O.W at his side, to systematically taking out the Vietnamese and Russian soldiers at the end (with the cruellest blow waiting for the Vietnamese captain, who is literally blown apart), there are plenty of meat shields for Rambo to go through. What was smart, though, is that he lost most of his gadgets at the beginning of the movie (after a harrowing parachute jump gone wrong), leading for Rambo to rely on bows, arrows and his trusty knife to get the job done. What makes it smart is, the gadgets, the computers, everything that Rambo sees at the beginning – that’s not him. Combat has moved on since his days in ‘Nam, but he’s more comfortable with the simple tools of war – having him use a new-fangled futurized weapon just wouldn’t seem right. Kudos especially go to his kill while completely camouflaged by mud (which caught me, even though I knew it was coming), and his creative possum move that lures in Podvosky for the kill. If you want satisfying kills all day long, then Rambo, First Blood Part II is definitely your movie.

This is honestly one of the toughest calls I’ve ever had to make in a Versus article. While the original is undeniably a classic, the sequel is so well-done and so seamlessly picks up and carries forward the themes from the first film, it’s hard to ignore. I think because it’s a little more exciting, I have to give the nod to the sequel by the slimmest of margins. There’s just something about seeing Sly Stallone run around a jungle with a machine gun, mowing down a bunch of bad guys, that’s iconic. While I think the first film had a more overall interesting storyline, I think Part II is everything excellent both about Rambo movies and action movies in general, and for that, I have to give it the nod.